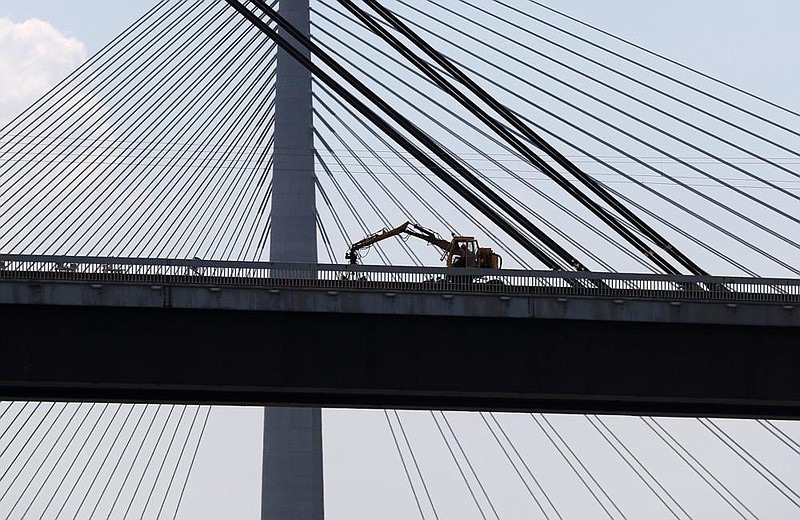 Construction equipment is seen Monday during work on the New Railroad Bridge over the Sava River in Belgrade, Serbia. (AP/Darko Vojinovic)

KABUL, Afghanistan -- A car bombing and mortar shells fired at a busy market in Afghanistan's southern Helmand province on Monday killed 23 people, including children, a statement from a provincial governor's office said.

Both the Taliban and the Afghan military blamed each other for the attack in Sangin district. Details of the reported attack could not be independently confirmed as the area, which is under Taliban control, is remote and inaccessible to reporters.

The statement from the office of the governor, Gen. Mohammad Yasin, did not provide further details and there was no claim of responsibility for the attack.

A Taliban spokesman, Qari Yusouf Ahmadi, denied that the insurgents were involved in the bombing. The Taliban claimed the military fired mortars into the market while the military said a car bomb and mortar shells fired by the insurgents targeted the civilians.

The army said there was no military activity in the area on Monday and that two Taliban fighters were also killed when the car bomb detonated at the marketplace. Sheep and goats for sale in the market were also killed.

NEW DELHI -- India announced a ban on more than 50 Chinese mobile applications, including the wildly popular video platform TikTok, in the wake of a deadly clash between the two nuclear-armed neighbors.

The prohibited mobile applications represent a threat to national security and the privacy of Indian citizens, the country's Ministry of Electronics and Information Technology said in a statement.

The government has received complaints that such applications were "stealing and surreptitiously transmitting users' data" to servers outside the country, an activity that "ultimately impinges on the sovereignty and security of India," the statement said. 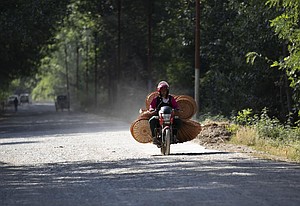 Photo by AP
A man transports wicker baskets on his motorcycle Monday on the outskirts of Srinagar in Indian-controlled Kashmir. (AP/Mukhtar Khan)

Monday's move appeared to be a consequence of the worst conflict between the two nations in more than 50 years.

Earlier this month, troops from the two countries engaged in a fatal brawl near their disputed border that resulted in the deaths of 20 Indian soldiers and an unknown number of Chinese casualties.

After the conflict, there have been calls in India to boycott Chinese products and shun Chinese mobile applications, including TikTok, which counts millions of users across India.

ByteDance, the company that owns TikTok, did not immediately respond to a request for comment.

BEIJING -- China said Monday that it would retaliate against U.S. moves to punish officials tied to political crackdowns in Hong Kong by imposing visa restrictions on Americans it considers to have "performed badly" on matters regarding the semi-autonomous Chinese territory.

Foreign Ministry spokesman Zhao Lijian gave no details in making the announcement at a daily briefing. It wasn't clear if the measure targeted only U.S. government officials or those in the private sector as well.

It comes as China's legislature is expected to pass a national security law for Hong Kong today that critics say will severely limit opposition politics and freedom of speech in the city.

The U.S. says it will respond by ending favorable trading terms granted to the former British colony after it passed to Chinese control in 1997. The Senate on Thursday unanimously approved a bill to impose sanctions on businesses and individuals -- including the police -- that undermine Hong Kong's autonomy or restrict freedoms promised to the city's residents.

Zhao reiterated China's insistence that the law was "purely an internal affair of China, and no foreign country has the right to interfere."

MADRID -- Spanish authorities announced Monday that they had dismantled a criminal network that smuggled some 2,750 tons of waste, including discarded and hazardous electronic equipment, from Spain's Canary Islands to several countries in Africa.

Spain's Civil Guard arrested 34 people, including a 62-year-old Italian woman who owned a trading business and allegedly forged custom clearance documents for the arrival and departure of the cargo from the port of Santa Cruz, in Tenerife.

The suspects loaded maritime containers with second-hand items such as vehicle parts and household goods. A third of the contents was e-waste. They were sent mainly to Nigeria, but also other African countries, where they were to be sold on to buyers there. The network allegedly sourced the equipment from bins, flea markets and industrial dumps.

Electronic devices can contain cadmium, mercury, lead, arsenic, oils, gases and other substances that can harm the environment or human health when they are not properly handled.