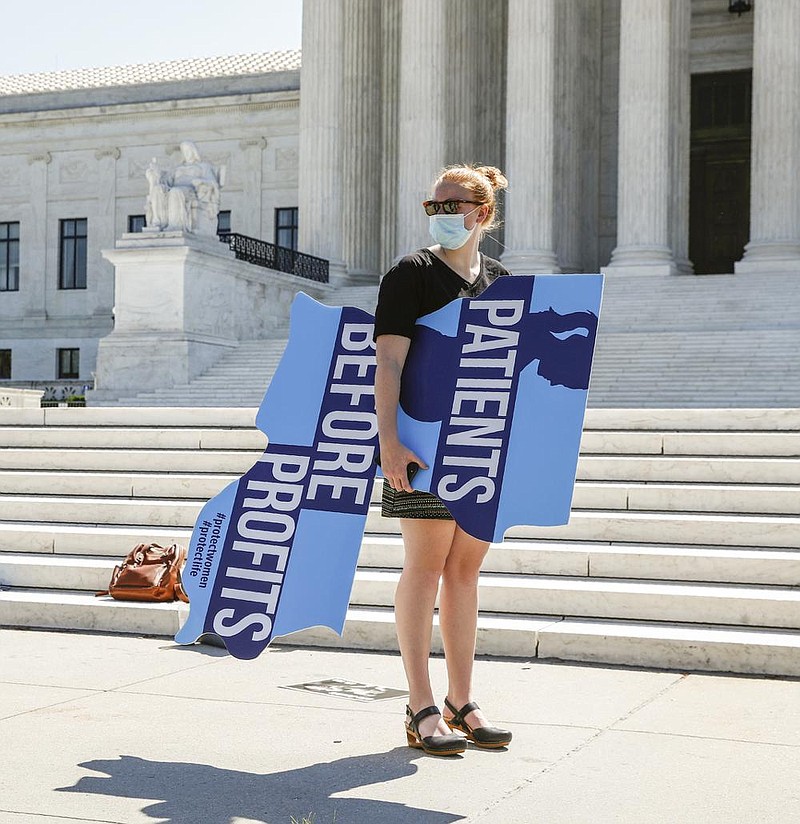 An anti-abortion protester stands Monday outside the Supreme Court in Washington. More photos at arkansasonline.com/630court/. (AP/Patrick Semansky)

WASHINGTON -- The Supreme Court on Monday struck down a Louisiana law regulating abortion clinics, reasserting a commitment to abortion rights over opposition from dissenting conservative justices in the first major abortion case to reach the high court during the Trump administration.

Chief Justice John Roberts and his four more liberal colleagues ruled that a Louisiana law that requires doctors who perform abortions to have admitting privileges at nearby hospitals violates abortion rights the court first established in the Roe v. Wade decision in 1973.

The outcome is far from the last word on the decades-long fight over abortion with dozens of state-imposed restrictions -- including two from Arkansas -- winding their way through the courts. But the decision was a setback for abortion opponents, who saw the new conservative majority in the high court as an opportunity to chip away at abortion access.

The key vote belonged to Roberts, who had in past cases voted against abortion rights, including in a 2016 case in which the court struck down a Texas law that was similar to the one in Louisiana.

The chief justice explained that he continues to think the Texas case was wrongly decided, but believes it's important for the court to stand by its previous decisions.

"The result in this case is controlled by our decision four years ago invalidating a nearly identical Texas law," Roberts wrote. He did not join the opinion written by Justice Stephen Breyer for the other liberals in Monday's decision, and his position left abortion-rights supporters more relieved than elated.

The case was the third in two weeks in which Roberts, a President George W. Bush appointee, joined the court's liberals in the majority. One of the earlier decisions preserved the legal protections and work authorization for 650,000 migrants who were brought to the U.S. as children. The other extended federal employment-discrimination protections to LGBT Americans, a decision that Justice Neil Gorsuch also joined and wrote.

Breyer, writing for the three liberal justices in the majority, said the Louisiana law was "almost word-for-word identical" to the one from Texas that the Supreme Court struck down in the 2016 decision, Whole Woman's Health v. Hellerstedt.

In both cases, Breyer wrote, the laws put an undue burden on the constitutional right to the procedure.

Breyer wrote that the law imposed great burdens on access to abortion but did nothing to protect women's health, its ostensible goal. He wrote that hospitalizations after abortions are rare, that women would receive medical care at hospitals whether their doctors had admitting privileges or not and that abortion providers are often unable to obtain admitting privileges for reasons unrelated to their competence.

Only two of the five doctors who provide abortions in Louisiana have obtained admitting privileges: one in New Orleans and one in Shreveport. But the Shreveport doctor testified that he could not handle the clinic's work alone. If the law went into effect, a trial judge concluded, there would be a single doctor in a single clinic, in New Orleans, available to provide abortions in Louisiana.

The evidence in the Louisiana case, Breyer wrote, was "even stronger and more detailed" than in the Texas case.

Breyer concluded that the law poses a "substantial obstacle" to women seeking abortions and places an "undue burden" on their constitutional rights, drawing on tests established in the court's 1992 ruling in Planned Parenthood v. Casey.

In dissent, Justice Samuel Alito wrote that the Louisiana law protects the health and safety of women seeking abortions and that the requirements for obtaining admitting privileges helps ensure the competence of doctors. The facts on the ground in the two states, he wrote, were enough to require a different conclusion.

"There is ample evidence in the record showing that admitting privileges help to protect the health of women by ensuring that physicians who perform abortions meet a higher standard of competence than is shown by the mere possession of a license to practice," Alito wrote. "In deciding whether to grant admitting privileges, hospitals typically undertake a rigorous investigative process to ensure that a doctor is responsible and competent and has the training and experience needed to perform the procedures for which the privileges are sought."

President Donald Trump's two high-court picks, Gorsuch and Brett Kavanaugh, were in dissent, along with Alito and Clarence Thomas. The presence of the new justices is what had fueled hopes among abortion opponents, and fears on the other side, that the Supreme Court would be more likely to uphold restrictions.

In Arkansas, the ruling could affect the outcome of two pending federal cases on abortion.

U.S. District Judge Kristine Baker blocked the enforcement of both laws on the grounds that any benefits they provide are outweighed by the undue burdens they place on the right of women to obtain pre-viability abortions.

Brownstein said that because Monday's Supreme Court ruling reaffirmed the use of that standard to weigh a law's constitutionality, it should "make it easier" for injunctions based on that standard to remain in effect.

The state's appeal of the injunction blocking the enforcement of Act 700 of 2019, which requires board-certification, is pending at the 8th U.S. Circuit Court of Appeals in St. Louis. The 8th Circuit reversed an injunction Baker imposed on the admitting-privileges law, but the appellate court has "stayed" its order, leaving the law unenforced, while the plaintiffs seek U.S. Supreme Court review.

The high court's ruling in the Louisiana case "is what we were waiting for, but we didn't expect this outcome," Brownstein said.

Meanwhile, Arkansas Attorney General Leslie Rutledge, whose office is defending both state laws, cited Roberts' comments about his reason for casting the deciding vote -- to support precedent -- as a reflection of "the weakness of the abortion practitioners' position."

She said Monday, "Abortion is a serious medical procedure that can often have complications and, if not adequately addressed, can leave women with long-term health issues including death. Despite today's technical decision against Louisiana's law, the Supreme Court reaffirms common sense laws that ensure protection of women's health and welfare."

But he said "this bad ruling is a detriment to the health and safety of women."

He also said, "Arkansas is still winning the fight against abortion and ranks as the second most pro-life state in the nation. This isn't the victory that a lot of pro-life groups had hoped for, but it won't stop us from fighting for the lives of unborn children."

The Trump administration had sided with Louisiana in urging the court to uphold the law. White House Press Secretary Kayleigh McEnany criticized the decision. "In an unfortunate ruling today, the Supreme Court devalued both the health of mothers and the lives of unborn children by gutting Louisiana's policy that required all abortion procedures be performed by individuals with admitting privileges at a nearby hospital," McEnany said.

Marjorie Dannenfelser, president of the anti-abortion Susan B. Anthony List, said, "Today's ruling is a bitter disappointment. It demonstrates once again the failure of the Supreme Court to allow the American people to protect the well-being of women from the tentacles of a brutal and profit-seeking abortion industry."

The Rev. Frank Pavone, national director of Priests for Life and a member of Trump's Catholic voter outreach effort, said the president's "two appointees voted the right way" in supporting Louisiana's ability to require doctors who perform abortions to have admitting privileges at nearby hospitals.

"Once again this ruling underscores the importance of elections," Pavone said in a statement. "We need a solid pro-life majority on the Supreme Court to uphold the rights of women and the unborn."

Johnnie Moore, an evangelical adviser to the Trump administration, said the decision could help motivate anti-abortion activists to vote to reelect the president to give him a third chance to put a nominee on the Supreme Court.

"Conservatives know they are on the one-yard-line," Moore tweeted. "Enthusiasm is already unprecedented, evangelical turnout will be too."

Abortion-rights advocates' support for the decision was mixed with a wariness that the future of abortion rights appears to rest with Roberts.

Nancy Northup, president and CEO of the Center for Reproductive Rights, said Monday's decision by no means ends the struggle over abortion rights in legislatures and the courts.

"We're relieved that the Louisiana law has been blocked today but we're concerned about tomorrow. With this win, the clinics in Louisiana can stay open to serve the one million women of reproductive age in the state. But the Court's decision could embolden states to pass even more restrictive laws when clarity is needed if abortion rights are to be protected," Northup said.

A trial judge had said the law would not provide health benefits to women and would leave only one clinic open in Louisiana, in New Orleans. That would make it too hard for women to get abortions, in violation of the Constitution, the judge ruled.

But the appeals court in New Orleans rejected the judge's findings and upheld the law in 2018, doubting that any clinics would have to close and saying that doctors had not tried hard enough to establish relationships with local hospitals.

The clinics filed an emergency appeal at the Supreme Court, asking that the law be blocked while the justices evaluated the case.

Early last year, Roberts joined with the four liberal members of the court to grant that request and keep the law on hold.

Roberts' vote was a bit of a surprise because of his earlier vote in the Texas case. It may have reflected his new role since Justice Anthony Kennedy's retirement as the court's swing justice, his concern about the court being perceived as a partisan institution and his respect for a prior decision of the court, even one he disagreed with. Roberts didn't write anything explaining his position at the time of the Texas case.

The regulations at issue in Louisiana are distinct from other state laws making their way through court challenges that would ban abortions early in a pregnancy. Those include bans on abortion once a fetal heartbeat is detected, as early as 6 weeks, and the almost total ban passed in Alabama.

Information for this article was contributed by Mark Sherman and Elana Schor of The Associated Press; by Adam Liptak of The New York Times; by Robert Barnes of The Washington Post; and by Linda Satter of the Arkansas Democrat-Gazette. 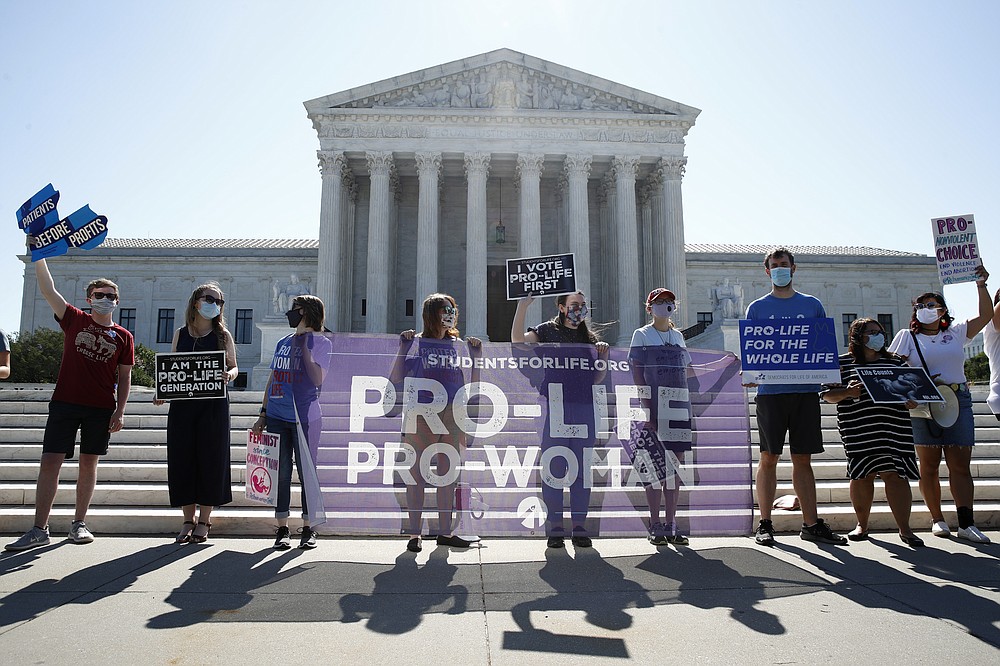 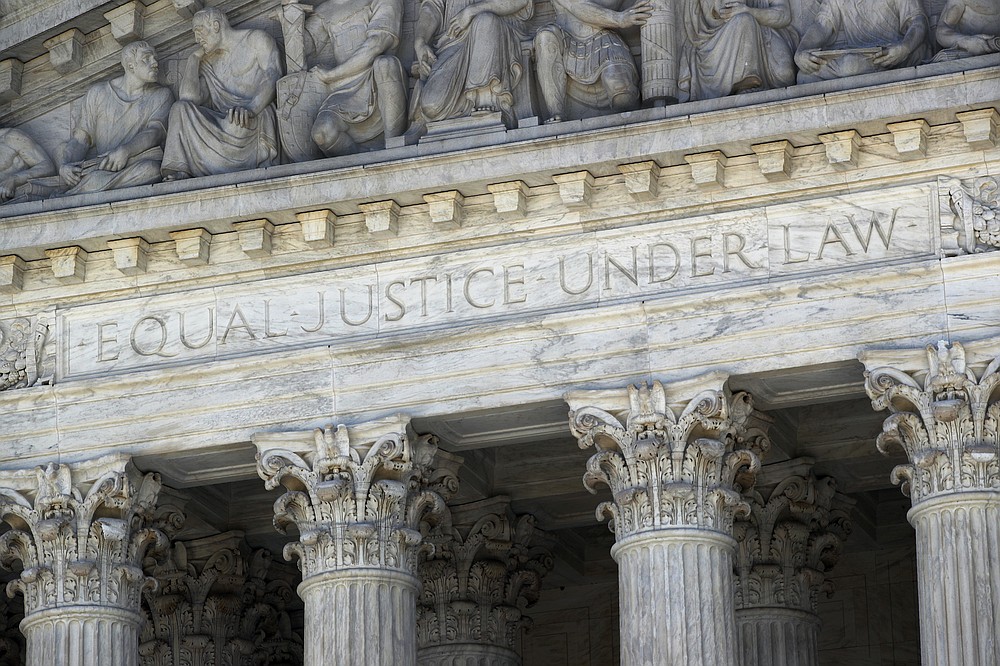 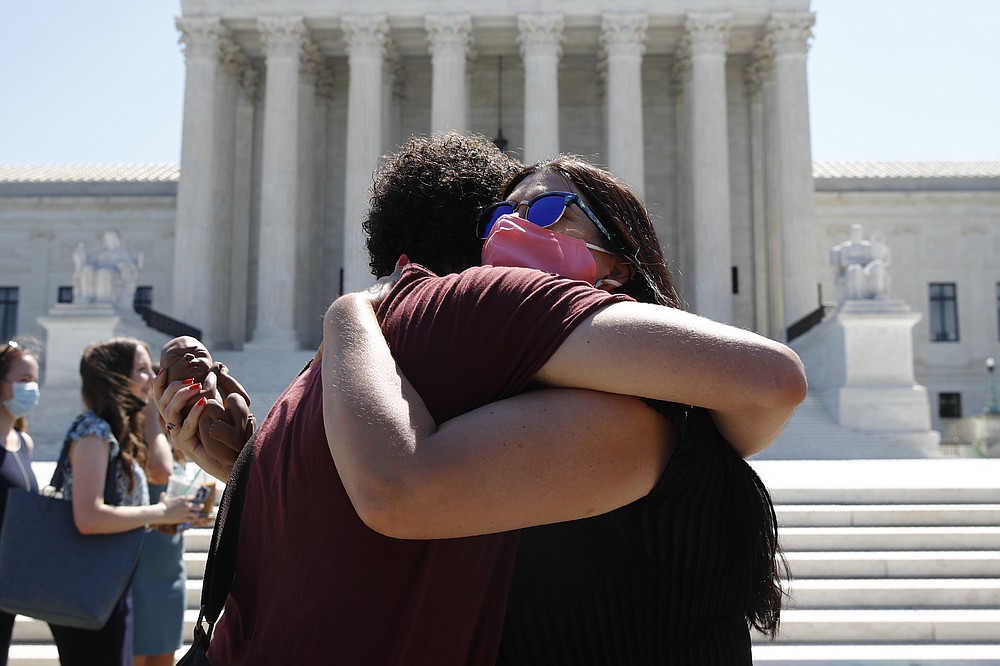 Anti-abortion protesters hug goodbye outside the Supreme Court on Capitol Hill in Washington, Monday, June 29, 2020. The Supreme Court has struck down a Louisiana law regulating abortion clinics, reasserting a commitment to abortion rights over fierce opposition from dissenting conservative justices in the first big abortion case of the Trump era. (AP Photo/Patrick Semansky) 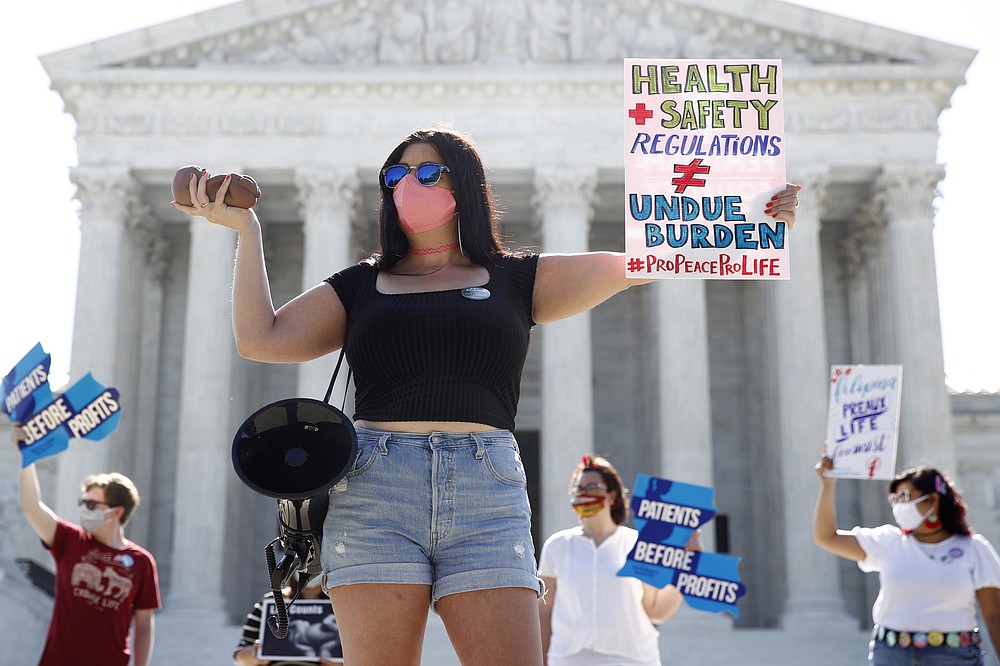 Terrisa Bukovinac, founder of Pro-Life San Francisco, holds a model of a fetus as she and other anti-abortion protesters wait outside the Supreme Court for a decision, Monday, June 29, 2020. The Supreme Court has struck down a Louisiana law regulating abortion clinics, reasserting a commitment to abortion rights over fierce opposition from dissenting conservative justices in the first big abortion case of the Trump era. (AP Photo/Patrick Semansky) 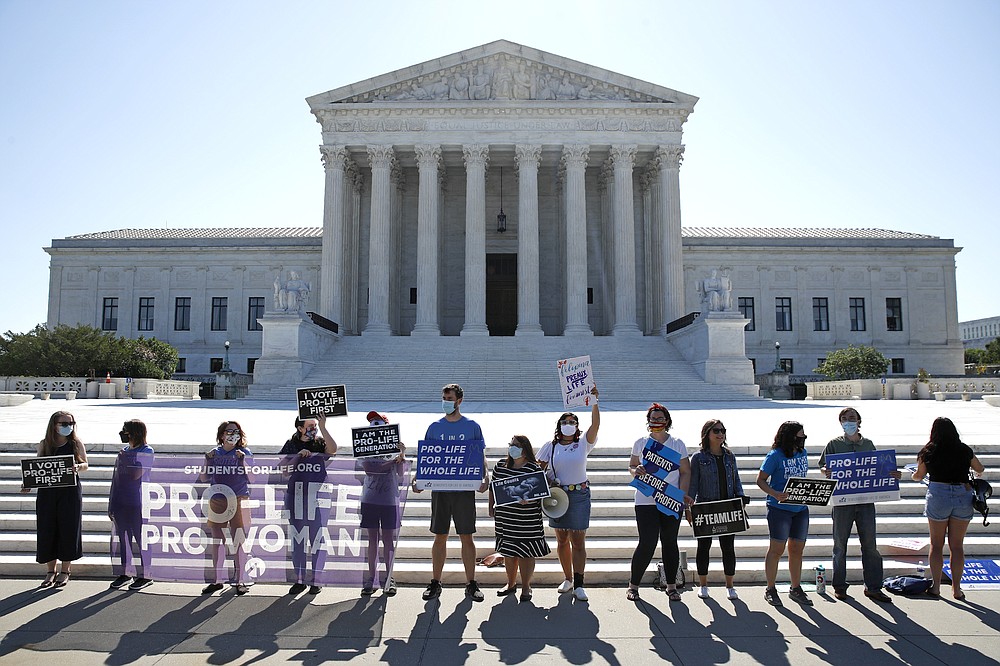