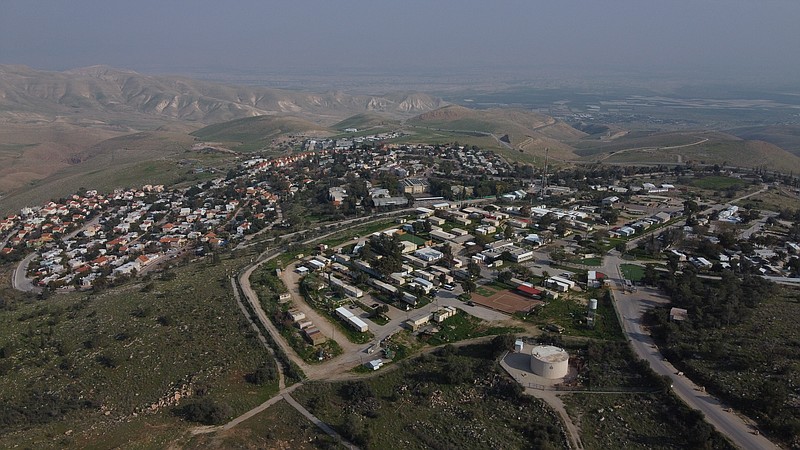 FILE - This Feb. 18, 2020 file photo, shows a view of the West Bank settlement of Ma'ale Efraim on the hills of the Jordan Valley. Israeli Prime Minister Benjamin Netanyahu has vowed to annex the valley and all of Israel's far-flung West Bank settlements, in line with President Donald Trump's Middle East plan, which overwhelmingly favors Israel and has been rejected by the Palestinians. (AP Photo/Ariel Schalit, File)

JERUSALEM -- Israel's top two leaders appeared to feud Monday about the timing of the country's planned annexation of parts of the occupied West Bank, complicating the task of American officials who were in Jerusalem trying to finalize a plan.

The comments by Prime Minister Benjamin Netanyahu and his defense minister, Benny Gantz, exposed a growing rift just weeks after their coalition government was sworn into office. It also raised questions about the viability of Netanyahu's annexation plan.

Netanyahu has said he wants to begin annexing occupied land as soon as this week in line with President Donald Trump's Mideast plan. Trump's envoy, Avi Berkowitz, is in Jerusalem this week working with Israeli officials on the contours of which land Israel can annex.

But in a meeting with his party, Gantz said his top priority is helping the country cope with the health and economic crisis stemming from the coronavirus.

"Anything unrelated to the battle against the coronavirus will wait," he said.

U.S. officials have said they would like the plan to have the support of Israel's two main parties, Netanyahu's Likud and Gantz's Blue and White. After three inconclusive elections, the rivals formed a power-sharing government last month, with its primary focus on guiding the country through the coronavirus crisis.

Netanyahu, a close ally of Trump, is eager to push forward on annexation well ahead of the U.S. presidential election. Gantz, a former military chief who also holds the title of alternate prime minister, has been far more cautious, saying any annexation must be done in consultation with international partners.

Netanyahu appeared to dismiss Gantz's concerns Monday, telling Likud members that he was working "discretely" with the Americans. "The issue does not depend on Blue and White," he said.

Under their coalition deal, Netanyahu and Gantz hold mutual veto power over most government decisions. But the deal makes an exception for annexation, allowing Netanyahu to introduce a proposal to the Cabinet or to the full parliament even without Gantz's approval. It remains unclear whether Netanyahu is prepared to do that.

The annexation plan has come under heavy opposition by the Palestinians and the international community.

Earlier on Monday, the U.N. High Commissioner for Human Rights, Michelle Bachelet, said the plan would have "disastrous" consequences for the region.

The U.N. secretary-general, the European Union and key Arab countries have all spoken out against annexation, saying it would violate international law and all but destroy any remaining hopes of establishing a viable Palestinian state alongside Israel.

"The precise consequences of annexation cannot be predicted," Bachelet said in a statement issued by her office in Geneva. "But they are likely to be disastrous for the Palestinians, for Israel itself, and for the wider region."

Israel's Foreign Ministry accused Bachelet of politicizing her office and noted that it froze ties with her office early this year because of what it called her "one-sided" attitude.

"It is not surprising that she decided today to join the Palestinian campaign against the American peace plan, and to publish declarations before any decision has been made," the ministry said.

The Trump plan, unveiled in January, envisions leaving about 30% of the West Bank under permanent Israeli control while granting the Palestinians autonomy in the remainder.

The Palestinians claim all of the West Bank, along with east Jerusalem and the Gaza Strip, for a fully independent state. Israel captured all three areas in the 1967 Mideast war, though it withdrew from Gaza in 2005, clearing the way for Hamas militants to seize control two years later.

Netanyahu has been unswayed by the international criticism. He says the supportive Trump presidency has provided a rare opportunity to redraw the Mideast map and annex Israel's scores of settlements, as well as the strategic Jordan Valley.

In a speech to evangelical Christian supporters of Israel late Sunday, Netanyahu said Trump's plan "finally puts to rest the two-state illusion" and would "advance peace."

Both Netanyahu and Gantz have been meeting with Berkowitz and U.S. Ambassador to Israel David Friedman to work on a final map outlining which areas will be annexed. The talks were continuing after a series of inconclusive meetings in Washington last week.