by STORY BY JACK SCHNEDLER PHOTOS BY MARCIA SCHNEDLER SPECIAL TO THE DEMOCRAT-GAZETTE | June 30, 2020 at 2:02 a.m. 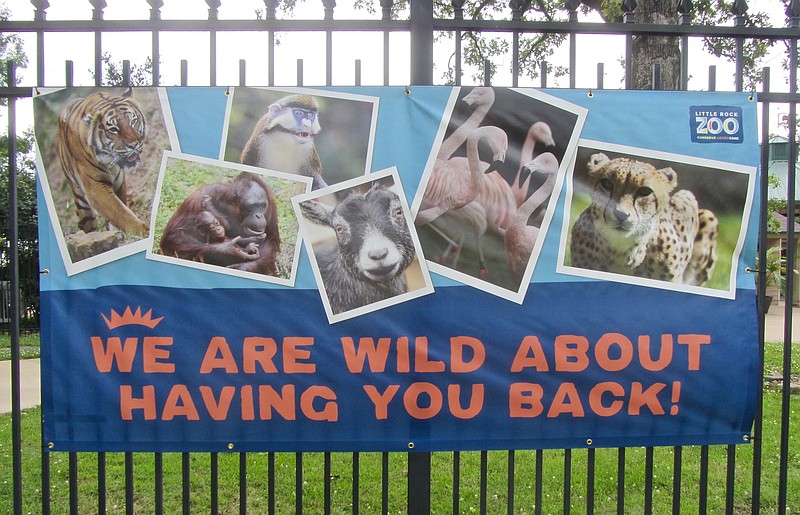 A sign at the entrance to Little Rock Zoo points out regulations for this months reopening. (Photos by Marcia Schnedler/Special to the Democrat-Gazette)
UPDATE

The Little Rock Zoo announced Friday, July 3, it would close until further notice after a staff member tested positive.

It said the employee worked "in the facilities operations division," never had a fever and did not have contact with the public.

"Zoo Director Susan Altrui stated that safety is a priority for the Little Rock Zoo and that the Zoo will close to sanitize areas, test staff and ensure public safety before reopening," the zoo said in a news release.

The Little Rock Zoo's more than 500 animals representing 200-plus species have regained their audience of human visitors after the popular attraction was closed for 14 weeks due to covid-19.

The opening, only to zoo-society members a week ago and to the general public as of Monday, June 29, is taking place under carefully calibrated regulations as the pandemic continues to affect normal life.

"The staff, animals and volunteers are excited to welcome everyone back," says Susan Altrui, director of the 33-acre zoo in War Memorial Park. "We've taken added precautions to enhance safety."

Altrui says that some animals did seem to notice the lengthy absence of humans other than zookeepers. She cites zebras specifically.

According to Ann Rademacher, keeper of the great apes, "the gorillas, orangutans and chimpanzees did seem to miss the visitors. They were very attentive when any staff walked by."

On a rainy day last week, two lionesses were eager to make their presence known to a pair of visitors on the other side of the large windows that form part of the spacious enclosure.

One of the lady lions pawed rhythmically at the thick glass as her human viewer took several photographs. The other female patted on the window as another visitor watched at close range. The male rested magisterially in a rock recess.

With the reopening, a major change in admission policy is in effect to encourage social distancing. Visitors must make reservations in advance for a specific day and time. Entry times are slotted each half-hour, starting daily at 9 a.m. and ending at 2:30 p.m. Zoo grounds close at 4:30 p.m. The zoo's safe capacity has been estimated at 2,760 visitors per day.

Some zoo areas remain closed. They include Cafe Africa, the gift shop, the historic carousel, and indoor animal areas such as the reptile and bird houses. A couple of open-air food trucks are available for light fare. Disinfected wagons, strollers and scooters can still be rented.

For the foreseeable future, all visitors age 10 and older are required to wear a proper face mask. Social distancing of at least 6 feet is urged, as well as regular washing of hands. And a one-way path past exhibits has been marked to reduce congestion.

Restrooms are open with sanitizing every two hours. Disinfection occurs every two hours for all handrails, benches and other surfaces likely to be touched. Stations for sanitizing hands are set up around the grounds.

With the zoo open again after the lengthy closing, Altrui reminds the public of proper behavior that applies at any time: "We always ask that visitors not yell loudly or taunt animals, that they never feed them and that they never throw anything into a habitat. When you come to the zoo, you are coming to the home where our animals live."

And what will happen when zoo visitors violate the regulations?

"We will have staff politely remind them of our policies," Altrui says, suggesting a civilized response aimed at encouraging civilized behavior.

Required online reservations can be made by visiting littlerockzoo.com. For non-members, adult admission is $12.95. The cost is $9.95 for children 3-12, with youngsters under 3 admitted free. For visitors 60 and older, as well as active military members, the fee is $10.95.