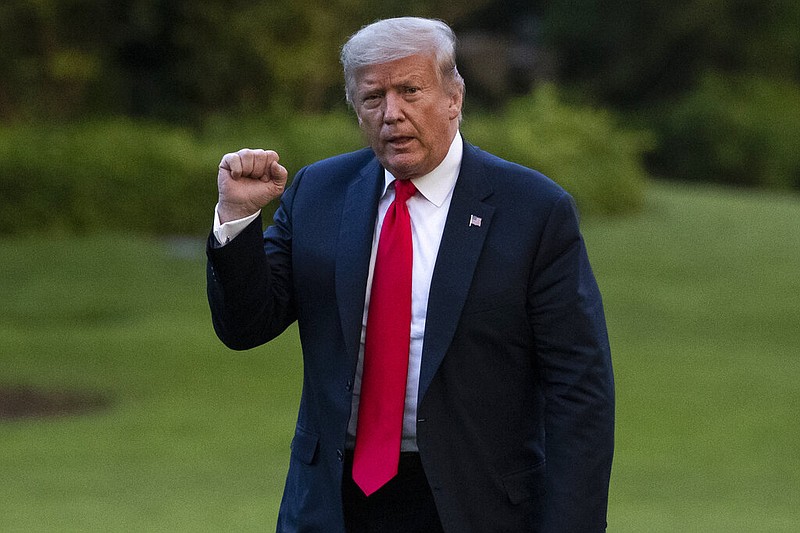 President Donald Trump pumps his fist as he walks on the South Lawn after arriving on Marine One at the White House, Thursday, June 25, 2020, in Washington. Trump is returning from Wisconsin. (AP Photo/Alex Brandon)

WASHINGTON -- Democrats and Republicans in Congress demanded on Monday that U.S. intelligence agencies promptly share with lawmakers what they know about a suspected Russian plot to pay bounties to the Taliban for killing U.S. troops in Afghanistan.

House Speaker Nancy Pelosi, D-Calif., and Senate Minority Leader Charles Schumer, D-N.Y., each requested that all lawmakers be briefed on the matter and that CIA and other intelligence officials explain how President Donald Trump was informed of intelligence collected about the plot. Trump has said he was not made aware of an intelligence assessment on the issue; officials have said that it was briefed to the highest levels of the White House and appeared in the president's daily intelligence brief.

"Congress and the country need answers now," Pelosi wrote in a letter to John Ratcliffe, director of national intelligence, and Gina Haspel, the CIA director. "Congress needs to know what the intelligence community knows about this significant threat to American troops and our allies and what options are available to hold Russia accountable."

In a statement, Schumer said he wanted to hear about "reports that Russia placed bounties on US troops in Afghanistan."

"We need to know whether or not President Trump was told this information, and if so, when," he said.

White House press secretary Kayleigh McEnany said during a television appearance Monday morning on Fox News that lawmakers would be briefed on the situation later in the day, adding, "I think that will clear up a lot of the false reporting."

[Video not showing up above? Click here to watch » https://www.youtube.com/watch?v=CYeKlDtyanU]

In a statement Monday evening, Haspel did not address the intelligence directly, nor did she dispute reports that it showed the Russians targeting U.S. forces.

"When developing intelligence assessments, initial tactical reports often require additional collection and validation," Haspel said, adding that "in general" information that may protect military forces "is shared throughout the national security community -- and with U.S. allies -- as part of our ongoing efforts to ensure the safety of coalition forces overseas."

Sen. James Inhofe, R-Okla., the chairman of the Senate Armed Services Committee, said he had asked for information and expected to know more on the matter "in the coming days."

According to U.S. officials with direct knowledge of the intelligence, top officials in the White House were aware in early 2019 of classified intelligence indicating Russia was secretly offering bounties to the Taliban for the deaths of Americans, a full year earlier than has been previously reported.

The assessment was included in at least one of Trump's written daily intelligence briefings at the time, according to the officials. Then-national security adviser John Bolton also told colleagues that he briefed Trump on the intelligence assessment in March 2019, officials said.

The White House did not respond to questions about whether Trump or other officials were aware of Russia's provocations in 2019.

Bolton declined to comment Monday when asked if he had briefed Trump about the matter last year.

The New York Times first reported on Friday that U.S. intelligence had found that a Russian military intelligence unit had secretly offered bounties to Taliban-linked militants in exchange for killing U.S. troops and their allies in Afghanistan. National Security Council officials met in March to discuss the intelligence, but the White House has taken no known action in response.

The Times further reported on Sunday that U.S. intelligence officers and Special Operations forces in the country had informed their superiors of the suspected Russian plot as early as January, after a large amount of cash was seized in a raid on a Taliban outpost.

U.S. officials believed that the death of at least one U.S. service member was tied to the bounties, and they are reviewing other combat casualties in search of other potential victims, officials familiar with the matter have said.

The intelligence community has been investigating an April 2019 attack on an American convoy that killed three U.S. Marines after a car rigged with explosives detonated near their armored vehicles as they traveled back to Bagram Airfield, the largest U.S. military installation in Afghanistan, officials told The Associated Press.

Three other U.S. service members were wounded in the attack, along with an Afghan contractor. The Taliban claimed responsibility for the attack on Twitter. The officials the AP spoke to also said they were looking closely at insider attacks -- sometimes called "green-on-blue" incidents -- from 2019 to determine if they are also linked to Russian bounties.

The intelligence officials and others with knowledge of the issue insisted on anonymity to discuss the highly sensitive matter.

The White House has not challenged that the intelligence assessment exists, or that the National Security Council held an interagency meeting about it in late March.

But Trump and McEnany have both said that the president was not briefed on the intelligence report. Trump said in a tweet late Sunday that "Intel just reported to me that they did not find this info credible, and therefore did not report it to me" or Vice President Mike Pence.

Rep. Mac Thornberry, R-Texas, the top Republican on the House Armed Services Committee, said Trump's tweet suggesting he had not been made aware of the reports was "a very concerning statement."

"Anything with any hint of credibility that would endanger our service members, much less put a bounty on their lives, to me should have been briefed immediately to the commander in chief and a plan to deal with that situation," he said.

Thornberry and Rep. Adam Smith, D-Wash., the committee's chairman, have asked for "a full accounting of what the White House knew about these Russian operations and when, in order to hold the appropriate administration officials and the Russian government accountable," according to Monica Matoush, a Democratic spokeswoman for the panel.

"If in the U.S. the special services are continuing to report to the president, I suggest that one be guided by the relevant statement of President Trump, who has already given his assessment of these publications," he told reporters during a conference call.