Legend's new album is all love 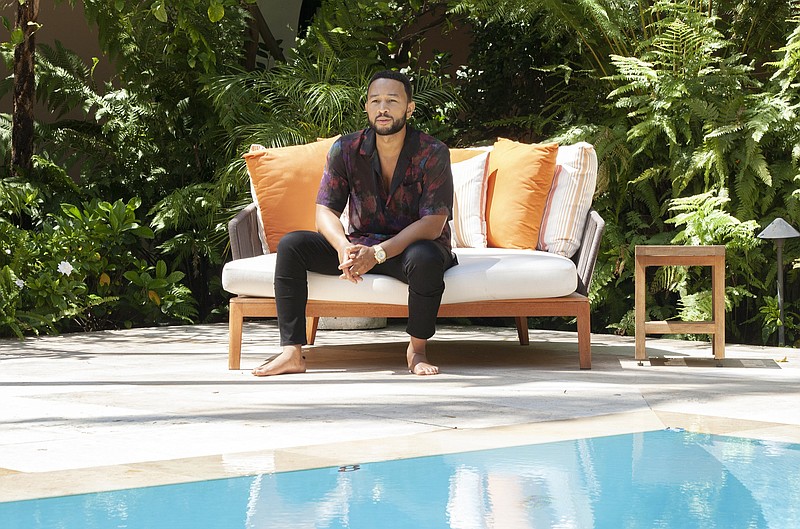 From the opening sample of the Flamingos' 1959 hit "I Only Have Eyes for You," John Legend's new album, "Bigger Love," is an unabashedly romantic record that touches on heartbreak but is a mostly upbeat exploration of enduring commitment.

The jaunty video for the album's title cut features Legend, his wife Chrissy Teigen, and their children Miles and Luna cavorting at home, along with dancing fans around the world.

Made before the coronavirus pandemic lockdown and the global outrage over George Floyd's death at the hands of police, it arrives in a different world than the one in which it was conceived.

But the 41-year-old singer still stands by the "Bigger Love" sentiment. "It's about having a more radical love that gets us closer to justice, a love that means every life matters, a love that means people around the world that don't look like you and don't worship like you, they matter too. That's the kind of love that I think can help us get through this."

Legend spoke from his home in Los Angeles about the album, the Black Lives Matter movement and his beginnings in Philadelphia. Meanwhile, in the next room, his family ate hamburgers that he had prepared for lunch.

Q: What message did you want to send with "Bigger Love" when you made it? And how are you thinking about it differently now?

A: If you listen to the album, there's a lot of joy and a lot of love. It's soulful, it's colorful and more danceable than any record I've made. It has a lot of positive energy and optimism. ... That was the vibe I was feeling as I was writing it and creating it.

But of course, we didn't know we'd be releasing it during a global pandemic that has resulted in the loss of hundreds of thousands of lives (and) in the wake of these protests mourning the killing of George Floyd.

So some of the tone of celebration and joy feels like it isn't responsive to this moment. But, we need that too, you know? A lift. We need joy. We need to feel those human connections that make life worth living. And I think this album celebrates those things, too.

Q: In the song "Bigger Love," you sing about love as a bulwark against a "world that feels like it's crumblin'/ Every day, another new somethin'."

A: And "Never Break" is about how resilient folks have to be to get through all of this trouble that we're going through in the world. ... Obviously some people do break under the pressure, some people don't survive it. We saw George Floyd not survive. But it's a song about hope and resilience and the belief that we can get through this together.

Q: It can be hard to love when you're angry.

A: I think we're right to feel angry and a sense of indignation and exhaustion with what we've seen time and time again in these videos and these interactions with the police. But part of what is going to get us through to actually making the change is a belief that each of us matters. ... If we just throw up our hands in anger or exhaustion, or fatigue, we won't get through this moment.

Q: Everybody knows that John Legend is a politically engaged, progressive guy. But you mostly sing about matters of the heart.

A: I think my career has been a kind of an interesting mix of songs that are more romantic and about everyday relationships, and then songs that speak to bigger issues in the world.

That's all me. That's all part of who I am and the ways that I write and express myself. Politically, I make it very clear where I stand when I'm speaking, or on my Twitter. But so much of my life is also my relationship with my wife and my kids and my family and I write about those feelings as well.

Q: Ten years ago you made 'Wake Up!' with the Roots. Last week, somebody tweeted at Questlove to suggest a sequel. He replied, "Challenge accepted."

A: That might have been my manager. (Editor's note: It was.) We've been ruminating on that ever since [President Donald] Trump got into office. Clearly, there's a lot of anger and frustration with this administration that a lot of us feel. ... So it definitely could inspire us to do another "Wake Up!," for sure.

Q: Did you watch the George Floyd video in its entirety?

A: No. I intentionally refused. I've read descriptions of it. I've seen clips. But I just don't like watching those videos. I just can't watch another man get killed in the way that people have been getting killed. I can't do it. I do not like looking at it.

Q: Are you hopeful?

A: I am. That's the crazy thing. Despite all this, I still remain optimistic. ... People are being pushed to open their eyes and see the pain their neighbors are feeling. The multiracial coalition walking in the streets right now protesting and fighting together saying 'Black Lives Matter,' I think that is a powerful thing.

Q: What music have you been turning to?

A: A lot of older music I've always loved. Curtis Mayfield and Nina Simone. Aretha Franklin and Marvin Gaye. ... I think what this time makes you want is to go back to those nostalgic moments that really made you fall in love with music in the first place. Those churches I grew up in, the cookouts and family gatherings that I experienced growing up in Ohio. I feel that kind of deep soulful connection to it. It's great music, just so well done and beautifully executed and timeless. It feels like home to me.

Q: When you were at Penn, were you confident you were going to make it?

A: Yeah. I had no concept of what that meant. I had this kind of hazy confidence that I was going to be a star, or at least get to do music for a living. I had no idea what that would entail.

I started learning about that actually while I was in Philadelphia ... when I was in college and meeting other musicians and producers and being around the Black Lily-Soulquarians scene at that time. At 10, though, it was just seeing Stevie Wonder on TV performing at the Grammys. I wanted to be there.