TELEVISION: "The Great" not your typical period bidrama 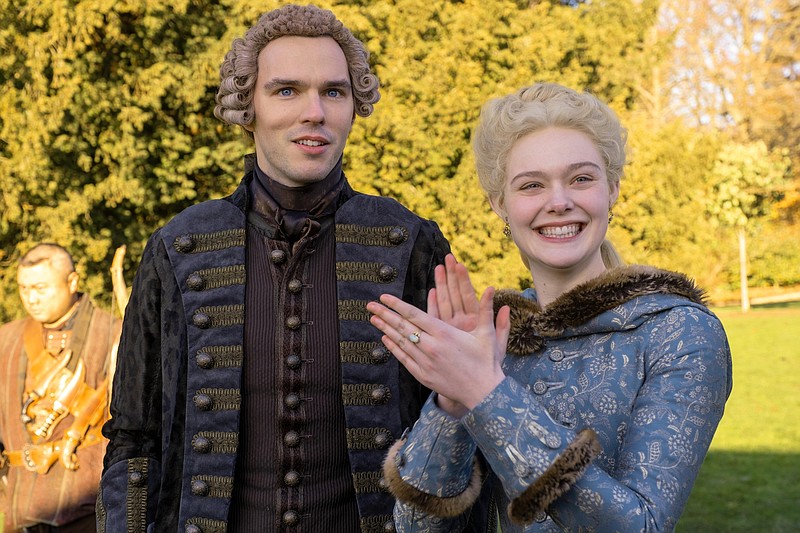 Peter (Nicholas Hoult) and Catherine (Elle Fanning) perform in a scene from Hulu’s “The Great,” a new period drama that Tony McNamara did not expect to make. The series does not stick to historical facts. (Hulu/TNS/Ollie Upton)

If you're put off by stuffy biodramas of kings and queens, don't fear the period series "The Great." Rest assured: so is the show's creator.

"I hate period things. Everything I wrote was contemporary," says Tony McNamara, the Australian TV veteran and Oscar-nominated screenwriter of "The Favourite." So, of course, his new Hulu show is set in 1740s Russia and is about Catherine (you know, ... the Great). "I read about her and thought, 'I really want to write about her. ... What would it take for me to like it?'"

"The Great" is a splash of cold water to the face of the "Masterpiece Theater" crowd and straight-no-chaser to "The Lion in Winter" fans, who like their royals sniping and snarling, but impeccably written all the same. It's shockingly direct, even abrupt, but all in service of a compelling narrative with a whole country at stake. Just don't take it as, shall we say, biographically precise.

He was joined on the call by stars Elle Fanning (from her kitchen) and Nicholas Hoult. Hoult's virtual background is a painting in spitting distance of the period, featuring a self-satisfied man holding a melon, suggestively split open. It makes Fanning laugh out loud because it's so on-brand for Hoult's Peter III ⁠— at least according to the show.

"Changing the character of the man she married from what he was, was to make a better antagonist," McNamara says. "It was making a modern show; it's not a history lesson. We use history where it serves us."

McNamara first mounted "The Great" as a play in Sydney some 10 years before "The Favourite." Like that 2018 film, the new comedy-drama is a brass-knuckled, freewheeling, frequently anachronistic and ahistorical view of actual historical figures. Here, they are breathing, fighting, fornicating humans. The gilded court into which Fanning's idealistic princess is dropped is a whirlwind of absurdity and debauchery.

Fanning says, "I hadn't seen 'The Favourite' when I read the script. I was like, 'Whoa, what is this? This is totally new and awesome and different!' The messiness really appealed to me."

There was plenty of messiness in Catherine's life. For one thing, she wasn't born Catherine or even Russian. Sophie Friederike Auguste was a 15-year-old Prussian girl from a noble family (fallen on hard times) who was arranged to marry Peter. Catherine had several children, none of which Peter fathered, came to power via coup against her husband and survived more than a dozen uprisings to greatly expand the Russian Empire. She became its longest-reigning female leader, installed major educational reforms (such as allowing women to be formally schooled ⁠— though still not allowing serfs to be), wrote books and pamphlets, and corresponded with Voltaire.

Fanning, young veteran of dozens of features, was glad the story would be told in series television, where it could unfold at its own pace.

"Reading Catherine and how she transforms ⁠— it's heartbreaking at first, her optimism," says the actress. "She arrives in Russia and meets her husband, and it's not what she signed up for. What was so exciting on set was we got to feel alive. I mean, of course, I'm stuffed like a sausage into a corset. We're on these crazy sets that are so elaborate and golden and rich. But Catherine is a human being, with emotions and complexities.

"I felt physical in a way I haven't before. I'm a physical person; I gesture a lot"⁠ — she does, the video chat testifies ⁠— "She's very young and naive, she makes mistakes, she doesn't have all the answers. She's learning from everyone in the court and especially from her enemies and from Peter. They're butting heads, but he's teaching her a lot of things."

Hoult's Peter is all naked id, flying from one unbridled impulse to another. Actors often strive for unselfconscious freedom; that's a base requirement to play this man-child at the wheel of a nation.

"The irreverent is something that really touches home with me because a lot of times a script can feel more restrictive than useful," Hoult says. "In Tony's writing, you can completely run with it. Peter, a live wire who's unpredictable, it's still all there on the page for you. You feel completely free and able to do anything; you don't have to force or push anything."

McNamara says of his two leads, "As a writer, you never want to think, 'Maybe they can do this, maybe they can't.'

But when asked what the show is really about, the company freezes. And it's not video buffering. Finally, McNamara takes over:

"It's about a young woman who comes to a country that's not her own, an empire, and takes it over. But in the way we tell it, it's ahistorical and a dark comedy about your destiny and what it takes to have power and what it costs you. And also it's about marriage, in a way.

"Is society just the way it is or can it change? If it changes, it can only change because the people in it can change. Every character is asked about their ability to change and the obstacles to being a better person, a better society. So I'd say that. And it's also really ... fun."