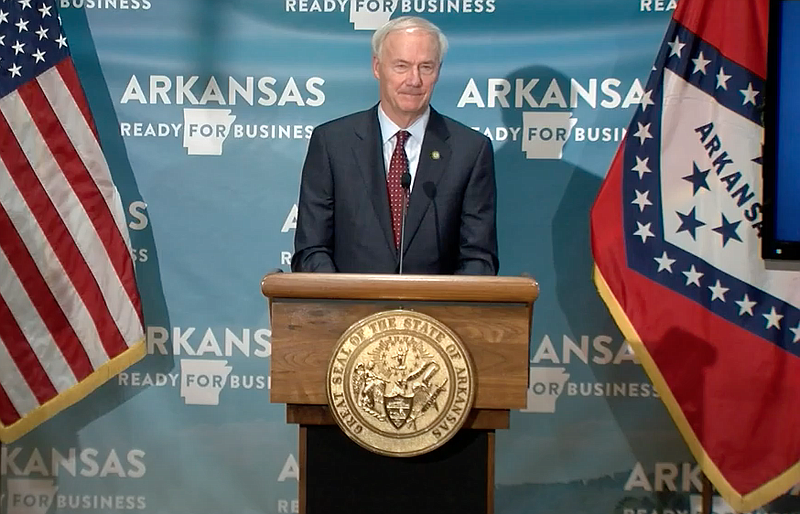 Arkansas Gov. Asa Hutchinson speaks to reporters at the state Capitol in Little Rock on Tuesday in this still of video provided by the governor's office.

"This is good news for us," Hutchinson said during a covid-19 briefing in Little Rock.

Hutchinson also authorized a merit pay increase of 2.2% for state employees during the pandemic. He made the decision based on a projected $225 million in un-allocated reserves.

The number of coronavirus cases increased by 520 in the past 24 hours, bringing the state's total to 20,777, state officials said Tuesday. The state had a positivity rate of 6.8%.

Hospitalizations declined by 10 and totaled 290, officials said, while virus-related deaths rose by five and totaled 270.

There were 5,976 active cases across the state, said Dr. Nate Smith, Arkansas Secretary of Health. Of those, 120 are in nursing homes and at least 548 are in correctional facilities, resulting in 5,308 active community cases.

Of the additional 520 cases, Smith said 18 were in correctional facilities and the rest were community spread.

Of those cases, counties with the highest numbers include Washington, 152, Pulaski, 118, Benton, 33, Faulkner, 23, and Yell, 21. Smith said 40% of Pulaski County's numbers were in Little Rock and 30% in Wrightsville, home to a correctional unit.

The rest of the counties had less than 20 cases, Hutchinson said.

Arkansas Department of Corrections Secretary Wendy Kelly, who announced Monday her plans to retire, will continue in her role through July 31, according to the governor.

Hutchinson also said that contact sports, such as football, will not move to the next phase until coronavirus cases are down in Arkansas.

The governor said he was “anxious to play,” but that until the number of cases decrease he didn’t “expect the movement to take place for going to a phase three, or for opening up for those additional contact sports."

The total number of coronavirus cases reported in Arkansas remained at 20,257 Tuesday morning, according to a state website. The death toll remained at 265.

[Video not showing up above? Click here to view » https://www.youtube.com/watch?v=Jyw7xPCqGZg]

Information for this article was contributed by Jeremy Muck of the Arkansas Democrat-Gazette.