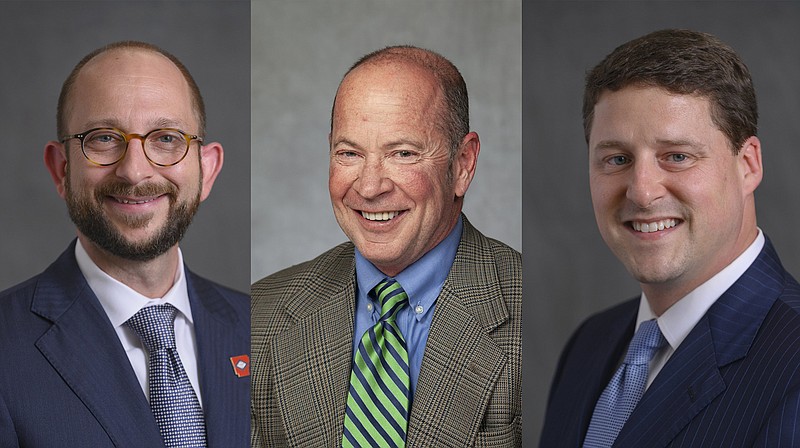 Smith, 69, is retiring after 31 years on the bench. His successor as 14th Division judge will take over a court that focuses mainly on family law.

Smith is one of six judges — out of 17 in the circuit — leaving at the end of the year. Circuit judges are paid $168,096 per year and are elected for six-year terms.

Election day is Tuesday. If no candidate wins a majority, the two highest-scoring candidates will face off in the November general election.

Ballard, 39, of North Little Rock said he is the only candidate in the race who has practiced family law for his entire career. Licensed in 2006, Ballard said he has both the practical experience of being a parent and the knowledge of how family court operates and affects people.

“I … bring the experience of having clients who are struggling with the worst time of their lives, worried constantly about where their children will live, how they will feed and shelter themselves and their children, and how they will rebuild their lives after the court divides the money and property they have spent a lifetime to acquire,” he said in an email. “[I understand] what clients are going through. I understand what the parties coming before the court are going through because of the experiences representing children and families in these cases and from my own experience raising three girls.”

Ballard said he chose a career in family law because families are the building blocks of society and sometimes need help and protection to thrive.

“I believed that I could have the most impact on the world by helping children and families,” he said. “Family law is complex, and every aspect of our society begins in the homes of families.”

Ballard said he counts representing the interest of children among his greatest accomplishments, writing a key textbook on the practice of family law and developing a respected practice with his law-partner wife.

He said his experience as a parent further distinguishes him as the most qualified candidate.

“Raising three girls from pigtails to driving lessons to walking them down the aisle,” he said. “Having mediated disputes between three teenage girls over issues as seemingly insignificant as one wearing the other’s clothing without permission gives me a perspective and insight my opponents simply do not have.”

Barron, 61, said he brings the most trial experience to the race, having been in private practice for 35 years with a broad background of legal experience, criminal defense, domestic law, probate and general civil litigation.

“Circuit judges are trial judges and I have the experience and passion to provide justice that is fair, consistent, and efficient,” he said in an email. “Having represented clients on both sides of the courtroom, I understand the lasting impacts the court’s decisions have on litigants and their families. Presiding over a courtroom requires someone who has the ability to listen, the patience to attend to details, the willingness to treat everyone with equal respect, the fortitude to make tough but lawful rulings, and the compassion to help those who are often dealing with life-altering issues.”

With endorsements from retired circuit judges Ellen Brantly, Collins Kilgore and John Plegge, Barron said his father and grandfather, both lawyers, taught him at an early age how important an attorney’s work is.

“I learned to appreciate our judicial system by listening to my father and grandfather talk about their cases and what drew me in is how passionate they were about protecting the rights of their clients,” he said. “From them, I learned how our justice system leveled the playing field so that everyone who entered a courtroom was treated the same, no matter their station in life.”

Barron of Little Rock counts among his greatest achievements holding a preeminent rating since 1996 from Martindale-Hubbell law directory, known as the who’s who of litigators. He said the recognition signifies that fellow lawyers rank him at the highest level of professional excellence for legal expertise, analytical capabilities, judgment, communication skills, and ethical standards.

Other top honors include his six-year appointment in 2007 by the state Supreme Court to the Arkansas Judges and Lawyers Assistance Program to provide mental-health and substance-abuse services to Arkansas’ judges, lawyers, and their family members. He was recognized for his service to the program, which included serving as chairman, in 2014 with the organization’s Justice Robert L. Brown Community Support Award.

“JLAP can help address problems before they jeopardize a lawyer’s practice, a judge’s career, or a family member’s health,” he said. “I was honored by this appointment as it put me in a position to directly help my colleagues and the community.”

Johnson, 44, said he is running for the judgeship to continue a lifelong commitment to give back to the public.

“I am a longtime public servant and have learned during my near 20-year public service career how to place service above self,” he said in an email. “Additionally, I have handled cases in the state and federal courts at all levels including the United States Supreme Court. As assistant attorney general for the past 12 years, I have fought on behalf of consumers against business scams. My legal scholarship combined with my experience as a consumer protection lawyer will be helpful in protecting the rights of families and children in our state courts.”

Johnson traces his interest in the law back to his days as a Boy Scout, when he earned his law merit badge while working to become an Eagle Scout.

“I have the ability to listen to all sides of any issue without expressing disagreement. This quality developed at a young age through my experiences in leadership in Boy Scouting and at school,” he said. “It is a helpful characteristic of mine because it has helped me learn how to build alliances for the benefit of all. As a lawyer, it is a useful trait because it has allowed me to build stronger relationships with clients and opposing counsel.”

Johnson said key among his formative experiences was his Rotary International scholarship to study medieval history at the University of St. Andrews in Scotland while earning his master’s degree.

“This experience embodies my commitment to international understanding, pursuit of education, and cultural awareness,” he said.

Among his most important accomplishments are persuading the U.S. Supreme Court in January to hear a case upholding Arkansas’ law preventing state pharmacies from being reimbursed by pharmacy-benefit managers below cost. The justices will hear that case in April.

Johnson said he is also proud of his work as a law clerk for U.S. District Judge Robert Dawson, calling his selection to assist Dawson an honor. The role also provided him a close-up view of how a successful judge operates.

“I had the opportunity to learn how to manage a courtroom docket and to compose orders and judicial opinions,” he said. “This experience signifies my demonstrated ability to be ready for the work of a judge.”

The most recent figures from the secretary of state’s office show that Ballard has raised $26,200 while spending $31,187. His top five donors are Lydia Ballard and Rodney Ballard of Virginia; Brian Faught of Jacksonville; and Keith Emis of Little Rock, who each contributed $2,800; with Hubert Alexander of Jacksonville contributing $1,000.

Johnson has received $104,535 in contributions while spending $66,183. His top donors are Pete Kennemer of Conway, Jane Sharum of Fort Smith, Randall Sharum of Texas, Ann Kausch of Texas and Graham Catlett of Little Rock. Each contributed $2,800.