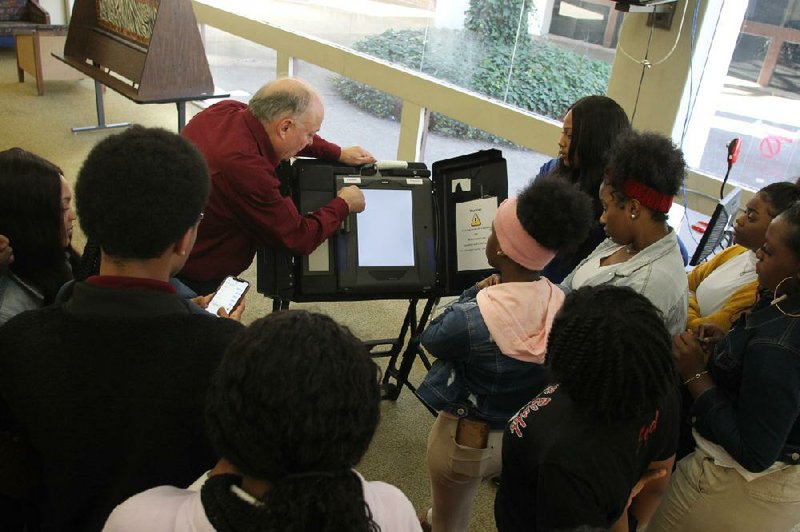 Last week, students from Pine Bluff High School, White Hall High School and Watson Chapel High School received training to prepare them to work as pages at some of the county's polling sites for the primary and judicial elections scheduled on Tuesday.

The students -- 17 from Pine Bluff High School, 15 from Watson Chapel High School and nine from White Hall High School -- will perform various tasks such as checking voters in when they arrive at the polling site, processing the voters, preparing the voting machines, keeping ballot logs and other tasks as needed. During about one hour of training, the students were provided with study materials, a printout of the training presentation, a sample ballot and a letter appointing them as election pages.

In addition, the students received orientation on the iVotronics touch-screen voting machine that will be in use in the county's 39 polling sites.

Although the election page position is an unpaid, volunteer job, Soffer said that each student will be paid $25 for attending the training session.

The training, Soffer said, is new to this election year because of a change in state law during the 2019 legislative session.

"You are making history in Arkansas," he told the group from Pine Bluff High School during the training session Monday.

Last month, election officials in Washington County trained about 140 high school students to work the polls as election pages there.

"In November or December, I reached out to the five school districts that serve Jefferson County," Soffer said. "I outlined everything, then I followed up. White Hall was first to respond, enthusiastically, and then Pine Bluff responded."

He said he was contacted by the Watson Chapel School District on Tuesday with a request to participate.

Soffer said he would have preferred to have more students in the training but said that if the effort is successful, once word gets out, participation should pick up.

"I think we'll know after election day but as you can see, some of these students really got with it," he said, motioning toward the students crowded around the touch-screen machine as election technician Sven Hipp went over some of the features of the machine.

"You see some of the oohs and aahs over the iVotronics. This is what we need to do to get more young people interested in voting."

Piccola Washington, a Jefferson County poll judge who assisted in the training session, said that she expects the idea of high school students serving as election pages to catch on.

"I think that it will," Washington said. "Especially with us working with the schools and the teachers, it will give them the opportunity to become more familiar with the voting process. Because for many of these students this is probably the first time they've gotten to touch the iVotronic."

Reginald Wilson, assistant principal at Pine Bluff High School, said that when he learned of the training, he jumped at the chance to involve his students.

"My initial reaction was that this is an excellent opportunity for kids to get this kind of experience, to get exposure so that they will have a much better idea of what the process is like once they turn 18 and get to vote," Wilson said. "They'll know how the process works and they can then explain to their friends, their parents, just how it works. I see it as a win-win."

Demetria Scott, 17, a senior at Pine Bluff High School, said her interest in volunteering as an election page stemmed from an interest in politics and the political process.

Bryce Lusk, 17, a junior at Pine Bluff High School, said that he saw the opportunity as a chance to learn something and to use as a resume builder.

"I think it will look good on my transcript when I get ready for college," he said. "Also, this is challenging, and I need that. I think it's a good opportunity."