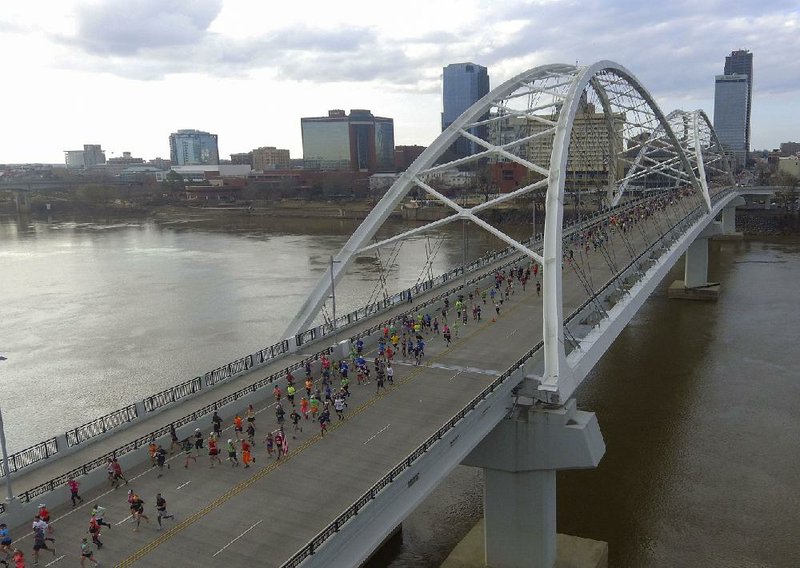 Runners make their way across the Broadway Bridge on Sunday in the early miles of the Little Rock Marathon. See more photos at arkansasonline.com/marathon. (Arkansas Democrat-Gazette/Staton Breidenthal)

Footraces of 26 miles, 385 yards are hard enough. Toss in multiple hills, high winds and unseasonably warm weather, and the Little Rock Marathon turned into more of a challenge Sunday.

Not even the fastest left unscathed.

Jeremy Provence was the overall winner for the second consecutive year with a time of 2 hours, 42 minutes, 47 seconds. Gryphon Ketterling finished second in 2:47.44, and Nicholas Inniger was third in 2:48.44.

It took Provence, the head coach of the men's and women's cross country programs at North Alabama, several minutes to recover enough to explain the effort required for his repeat.

"It was tough," Provence said. "It was hot and windy. It's not a good day to run a marathon in regards to run a good time, but, I mean, it went well. I toughed it out. I finished. I won. That was nice, but yeah, this was tough."

"When I did this two years ago, my big goal was sub-three [hours]," Stone said. "The big goal today with the wind and warm weather was to just get the fourth win. I wanted four wins, one for each kid."

Stone, 41, of Searcy has four children.

Whereas Stone led from the start, Provence was pushed through the first 18 miles by Ketterling.

Since the Little Rock Marathon was first run in 2003, entrants almost universally categorize the climb from the 15th mile into Little Rock's Hillcrest neighborhood on Kavanaugh Boulevard toward Mount St. Mary High School as the race's most significant challenge, but Provence and Ketterling -- who passed the half-marathon mark practically side by side in 1:17.07 -- raced to its apex together. They remained a tandem into the 18th mile after the long descent down Allsopp Park Road as they worked toward the Arkansas River and Rebsamen Park.

Few runners, even those in the elite class, escaped cramps after a morning spent in battle with southerly winds of 15-29 miles per hour, and a temperature that reached 67 degrees late in the race.

Hamstring cramps struck Ketterling with 7 miles to go, and he had no choice but to watch Provence pull away.

"He just kept going, and I just cramped up," said Ketterling, 22, of Broomfield, Colo. "My legs just couldn't hold it. They locked up, my left hamstring, and then my quads, too. I was really happy to get the second-place finish. I'm really proud of that."

"Knowing the course is beneficial in any marathon," said Provence, a graduate of Mountainburg High and the University of the Ozarks in Clarksville. "I had a good idea of when I needed to push, when I needed to conserve, and where I needed to be when the turns were coming up. It definitely helped."

Inniger said he tried to relax in third, a choice that allowed him to gain on the leaders through the final miles, though he said he knew from the midway point that the top two were uncatchable. Perhaps due to his strategy, Inniger was clearly the most energetic of the top finishers afterward.

"I just ran my own race," he said. "I just wanted to keep it at about what I thought I could do. It was a beautiful day. Couldn't ask for a better day out here."

Wilkes, 37, of Little Rock -- who still was struggling to find her balance nearly 20 minutes after she finished her 53rd marathon -- said she considered shutting down her effort while struggling into Hillcrest.

"After about Mile 7, I thought it was a fight because of the wind," Wilkes said. "That was really hard today. At the end, it was so tough, and I just told myself to hold on." 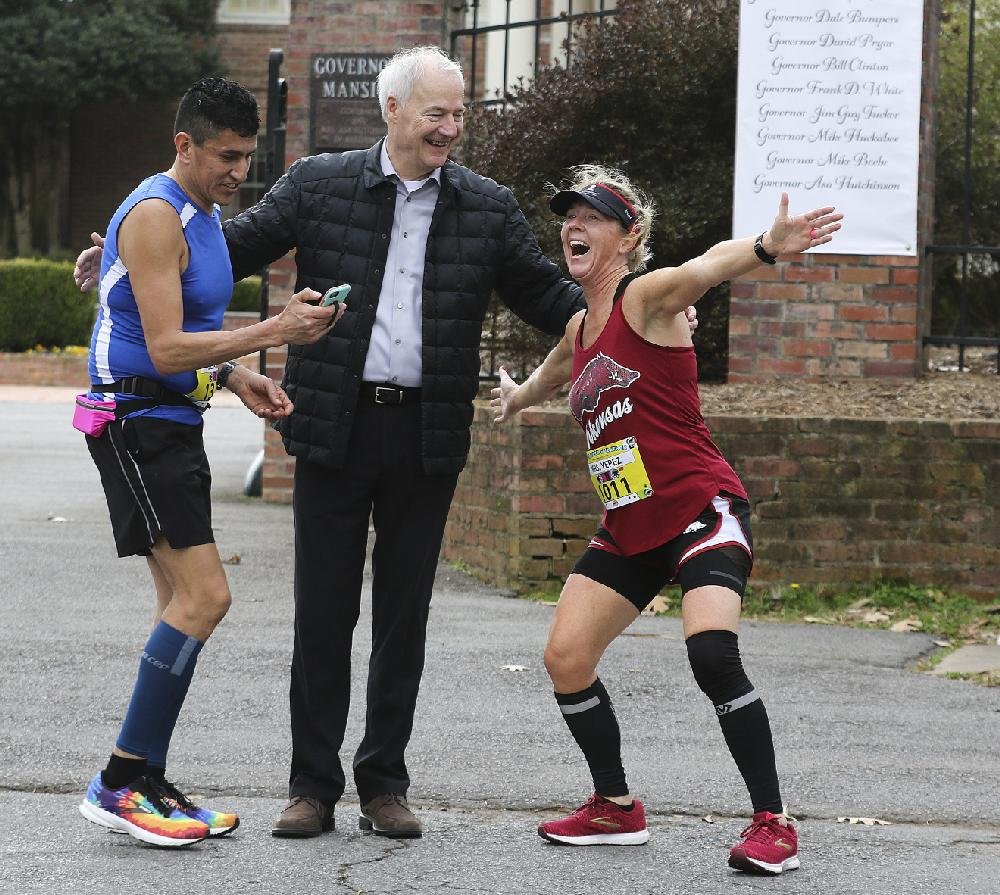 Despite the seeming comfort of her winning margin, Stone said she had just completed her most challenging Little Rock Marathon yet.

"There were a lot of strong headwinds in certain areas and crosswinds," Stone said. "Then it really warmed up. I knew around Mile 8 or 9, I was going to have to adjust my goal pace, and I just kept adjusting it as I ran."

Runners at every level of the sport hope to set personal records, or to PR, any time they race when well prepared. For most in this marathon, thoughts of personal records were forgotten.

"My biggest goal coming in was I wanted to get a PR," Provence said. "I wanted to win, too. I didn't PR, but kudos to everyone out there. It was just a tough day to run a marathon." 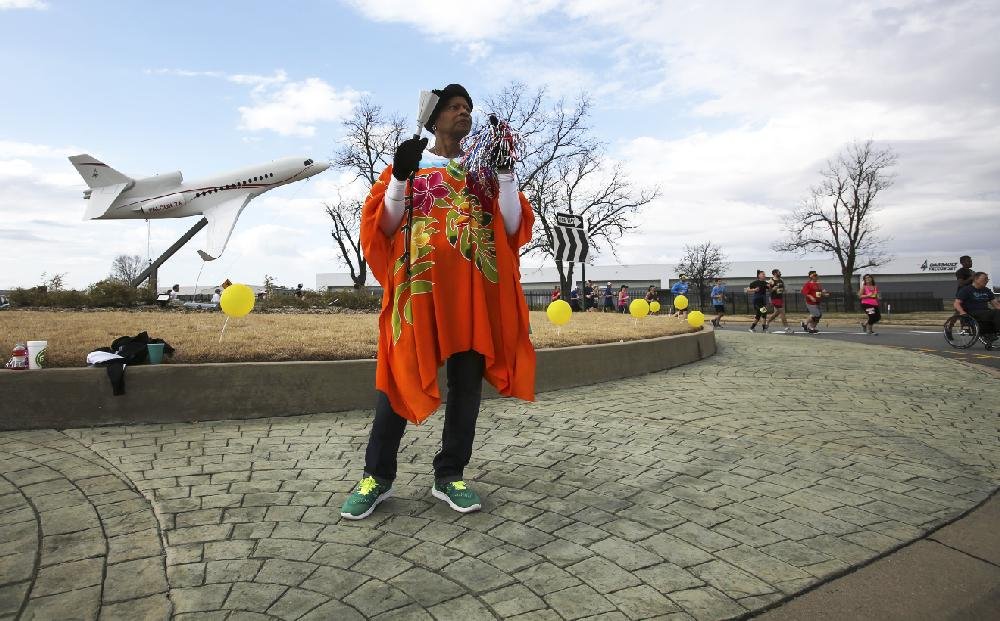 Brenda Stacker cheers on runners as they make the turn near Bill and Hillary Clinton National Airport during the Little Rock Marathon. See more photos at arkansasonline.com/marathon/ (Arkansas Democrat-Gazette/Thomas Metthe) 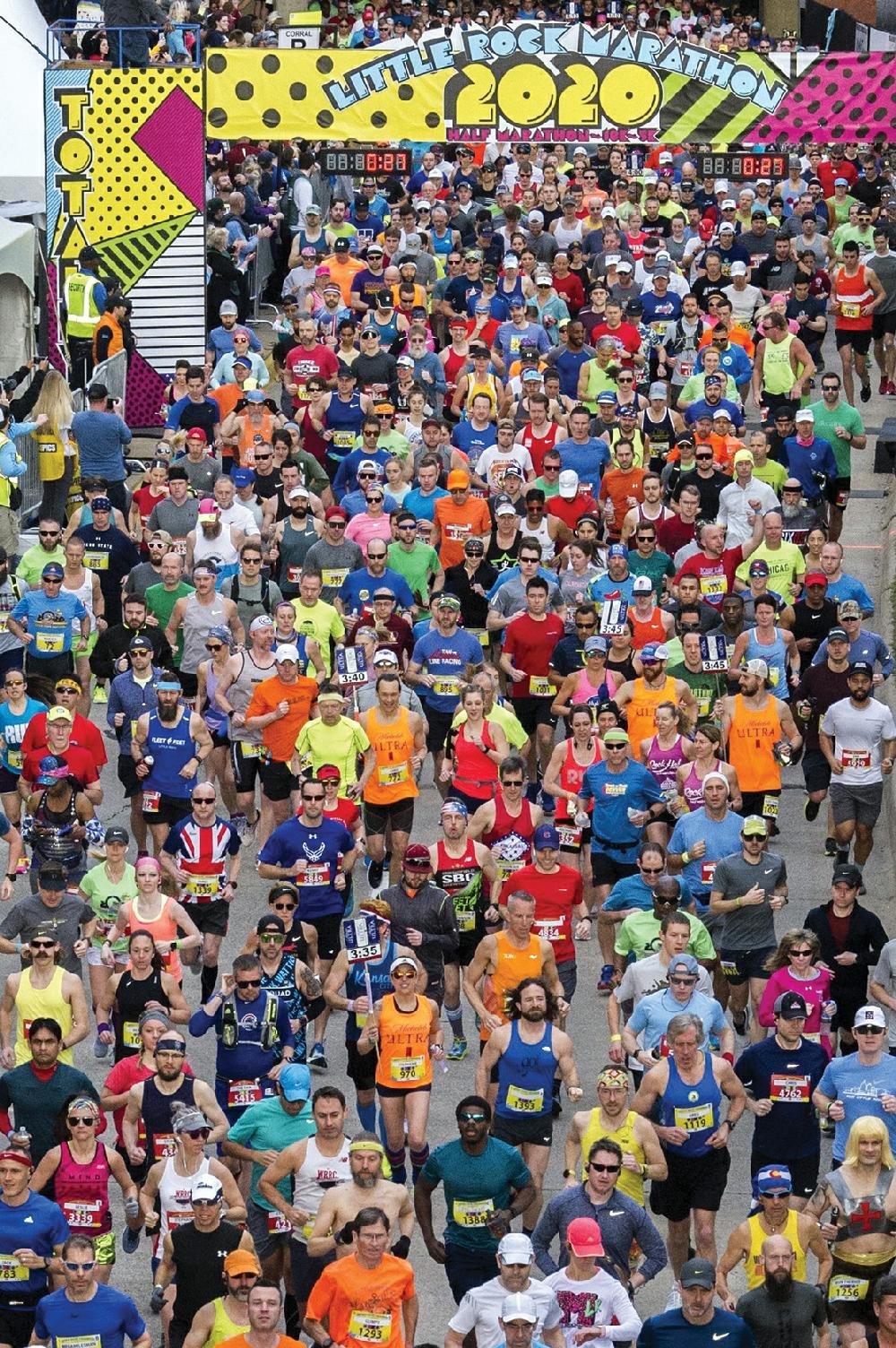 Runners take off Sunday morning at the start of the 2020 Little Rock Marathon. Jeremy Provence of Florence, Ala., won the men’s race, while Tia Stone of Searcy was the women’s champion. For more photos, go to arkansasonline.com/marathon/photos/ (Arkansas Democrat-Gazette/Stephen Swofford)