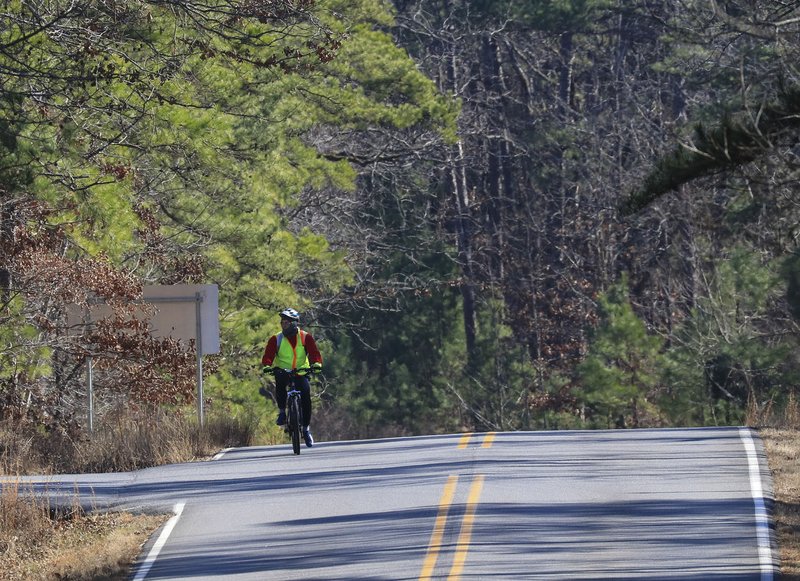 A cyclist rides along Pinnacle Valley Road near the entrance to the Pinnacle Mountain State Park Visitor Center in this January 2018 file photo.

Metroplan, the designated metropolitan planning organization for four counties in Central Arkansas, thinks it will be more effective to build bike trails rather than roadways.

The organization will test that theory by committing $55 million over the next 10 years to developing and building a regional multiuse path network throughout Faulkner, Lonoke, Pulaski and Saline counties.

"It's exciting, and it's a game-changer for us and hopefully for the region," Metroplan's top executive, Tab Townsell, said last week. "But it certainly changes the direction of our purpose."

The agency's board, composed of the region's mayors and county judges, voted unanimously last week on a resolution committing to the new path.

"This trail initiative is innovative, it is trend-setting, and it will succeed because we are committed to it over the long term," North Little Rock Mayor Joe Smith, the board's president, said in a statement after the vote.

Building a regional multiuse network integrated into local trails, paths and sidewalks as well as street and transit networks, the board concluded, represents a "more complete transportation solution" for the region.

More broadly, such a network will provide benefits beyond transportation, including enhancing the region's quality of life and promoting economic development, board members said.

Developing amenities such as bicycle trails is an increasingly important component of attracting younger workers.

"For those people they are hiring, this is a major lifestyle amenity and enhancement a region can offer," Townsell said.

The decision came after a year in which board members visited two areas where multiuse paths play key roles in their respective regions.

In May, the board held a retreat in Bentonville, which is part of the Razorback Regional Greenway, a 36-mile shared-use trail extending from north Bentonville to south Fayetteville.

In the fall, board members visited Greenville, S.C., which features the 20-mile Swamp Rabbit Trail that uses greenway networks and abandoned rail lines to link city neighborhoods with downtown Greenville, two parks, Furman University and the town of Travelers Rest.

"Both of those are regional trails that show the benefit of trails from a transportation standpoint and from an economic development standpoint," said Casey Covington, Metroplan's deputy executive director.

"Those added benefits they brought to the communities appealed to our board members," Townsell added.

Devoting $55 million to paths rather than roads also will have more of an effect regionwide than making road and bridge improvements.

As the board noted in the resolution, the federal funding available to Metroplan "is insufficient to adequately address street transportation needs in a regionally significant way."

"So this will have a regional footprint and regional benefit, we think. That changes our scope, and we are the ones uniquely positioned to do that. Our monies aren't just the scale to make a major difference at the Highway Department level."

The next step will be to hire a transportation planning firm to help develop the regional network, an intensive endeavor that could take two years.

The concept of trail connections in Central Arkansas received a down payment last week.

On Feb. 24, Pulaski County announced it had received an $880,000 grant from the Federal Lands Access Program to develop what is intended to be part of the Southwest Trail, a proposed 60-mile route from Central High School in Little Rock to Hot Springs.

The grant will allow construction of three bridges on a 4.2-mile section of former Rock Island Railroad right of way between Hilaro Springs Road and the Saline County line that is intended to be part of the Southwest Trail. Construction is expected to begin by the end of the year.

Saline County also received money that will allow it to complete a crossing for the trail over the Saline River and look at beginning construction of its portion of the trail.

Barry Hyde, the county judge of Pulaski County, called the developments a "big milestone" in the initiative.

Southwest Trail backers are expecting to receive final federal approval for the environmental assessment of the route in June, and they are applying for a second time for a competitive federal transportation grant program for up to $25 million. They were rebuffed the first time they applied, but after sitting down with federal officials, they are confident they will be successful, Hyde said.

Hyde said the Metroplan initiative may help the Southwest Trail, but he said it will help everyone in the region, especially smaller communities. The resolution specifically allows money to be spent on trail design, which he said is where small communities "get hung up" because they lack the resources to pay for preliminary work they need in order to qualify for available construction money.

How the actual regional network is developed will eventually be decided by the board.

Instead of initially building a regional trail, the focus could be on individual communities first, Townsell said.

"If you think about who is going to use the trail, the broad connectivity fades a little bit," he said. "Generally, everyone in Bryant who is using the trail in Bryant probably would be from Bryant. Same way with Cabot or Maumelle.

"It may be that we will focus on localities in dense jurisdictions first and connectivity will come later. It's going to be interesting to see where the board goes."

Last week's resolution was only the beginning.

"But this is obviously a critical first step in any ultimate build-out, no matter how long it takes or how much money it takes," Townsell said.