At murder trial, girl testifies of brother's abuse by parents 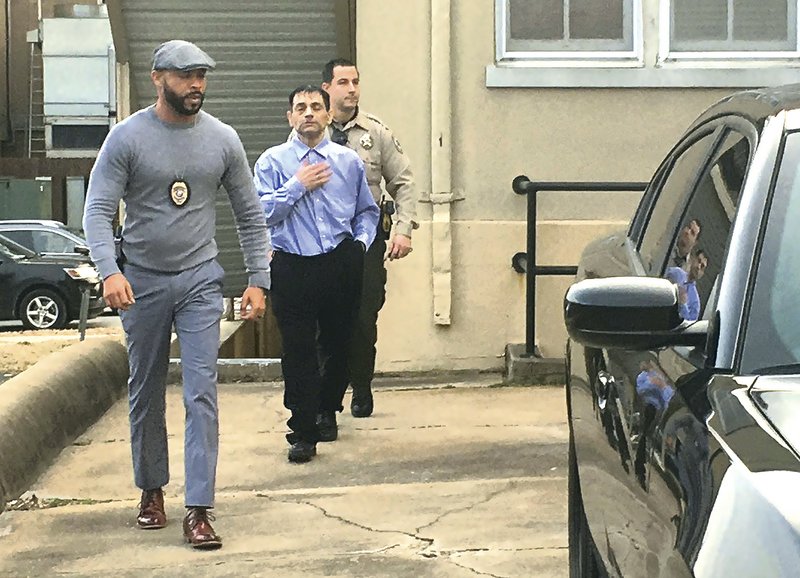 Mauricio Torres walks to a police vehicle Wednesday while being escorted outside the Benton County Courthouse in Bentonville. (NWA Democrat-Gazette/Tracy Neal)

BENTONVILLE -- A jury on Monday heard a 12-year-old girl describe the abuse her younger brother endured at the hands of their parents.

Mauricio Alejandro Torres, 50, of Bella Vista is charged with capital murder and battery. Prosecutors are seeking the death penalty.

It's Torres' second trial. He was previously convicted of the same charges, but last year the Arkansas Supreme Court overturned the convictions and ordered a new trial.

Six-year-old Maurice Isaiah Torres died March 30, 2015, at a Bella Vista medical clinic. A medical examiner testified in the 2016 trial that the boy's death was caused by a bacterial infection resulting from sodomy.

Torres started crying when his daughter walked into the courtroom, but he remained silent as she testified.

Stuart Cearley, chief deputy prosecutor, asked the girl how she wanted to refer to her parents, Mauricio and Cathy Torres.

She wanted to refer to them as "bio dad" and "bio mom."

The girl said her biological parents treated Isaiah differently from her and Isaiah's twin sister.

She, her sister and her parents would eat cooked meals or restaurant food while Isaiah had to eat rice and beans, the girl said. They sometimes gave him peanut butter, she said.

She testified that Isaiah had to sleep in a dog cage, and for one month he had to stay in a large trash can.

The girl said she sometimes had to act as a guard to keep her brother from escaping to get food.

The girl told jurors that she witnessed her father putting a stick between her brother's legs. She also said her father would punish the boy by pulling out his teeth with pliers.

She told jurors that she remembers her mother pouring bleach on Isaiah while Mauricio Torres was scrubbing him, adding that the boy had to go to the hospital.

"[Isaiah] was happy because he got to eat real food, watch TV and sleep in a real bed," the girl said.

Bill James, one of Mauricio Torres' attorneys, asked the girl if she testified at the last trial that Cathy Torres was the one who poured bleach on Isaiah and if she didn't mention her father in the bleach story.

The girl said she remembers her father scrubbing Isaiah.

"I know it's true because I remember seeing it," she said.

She testified that even though Isaiah and her sister are twins, they did not celebrate Isaiah's birthday.

"He wasn't given any present or birthday cake?" Cearley asked. "No," she answered.

She testified that she and her sister got Christmas gifts and stockings with gifts, but Isaiah's stocking had coal in it.

James questioned the girl about other things that she did not mention in earlier interviews and testimony.

The jury also spent time Monday watching video of Mauricio Torres' confession to sodomizing his son with a stick to punish him.

Torres told Bella Vista police Capt. Tim Cook in an April 7, 2015, interview that he twice placed a stick in his son's rectum and made him stand in the corner and do squats.

Torres said he punished his son for eating cake while the family was on a camping trip in Missouri. Torres said in the interview that his son was doing the squats and that his wife forced the boy down on the stick, which resulted in the injuries that led to Isaiah's death.

Dr. Stephen Erickson, assistant medical examiner, testified that the boy's death was the result of an infection as a result of sodomy. He said child abuse was a contributing factor to the child's death.

The jury viewed photographs of Isaiah's body as Erickson pointed out the injuries.

Erickson said Isaiah's nose had been broken and that several of his teeth had either been knocked or pulled out.

Erickson said he could not tell how many wounds were on Isaiah's head because of the numerous new and old injuries.

The defense will begin to make its case this morning.