Britain at table with EU on trade 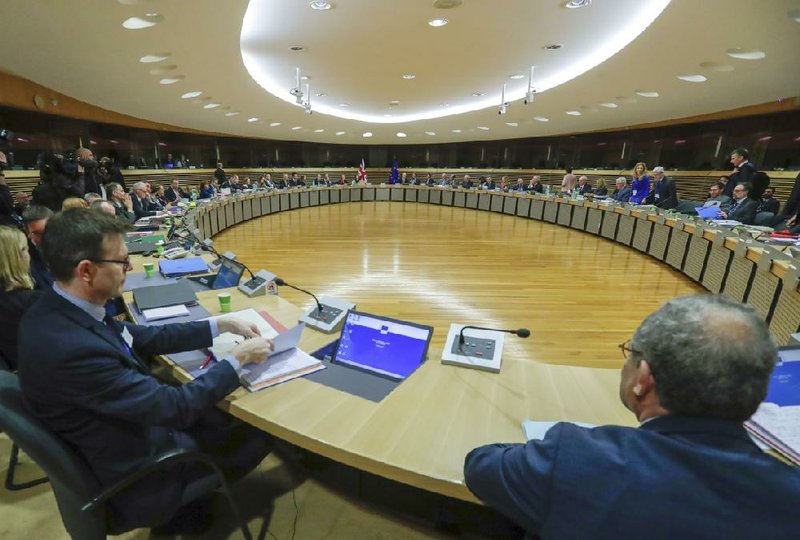 The British and European Union delegations gather Monday for the first round of post-Brexit trade talks at EU headquarters in Brussels. More photos at arkansasonline.com/33brexit/. (AP/Olivier Hoslet)

BRUSSELS -- Long-awaited trade talks between the European Union and the United Kingdom kicked off Monday amid deep tensions over Prime Minister Boris Johnson's threat to walk away from the negotiations if not enough progress is made within four months.

Britain left the EU on Jan. 31, the first country ever to do so. Monday's talks mark the start of a process aimed at securing new commercial, fishing and other ties with the world's biggest trading bloc.

All that has to be concluded by the end of this year, according to Johnson. Given that most EU trade deals with other countries take years to conclude, there is real time pressure on the negotiators.

The chief negotiators -- the EU's Michel Barnier and the U.K.'s David Frost -- held an initial meeting in Brussels on Monday before scores of officials from the two sides got down to business.

Barnier has warned the U.K. that no deal can provide the frictionless trade that membership provided.

The first round of talks will run until Thursday and will center mostly on negotiating formalities, although some discussion on the substance of an agreement is expected. The teams are expected to meet every two to three weeks, alternating between Brussels and London. Half a dozen or so rounds of negotiations are expected to take place by the end of June.

Under the separation agreement signed last year, Britain must decide by June 30 whether it wants to extend a transition period that is aimed at smoothing its departure from the bloc, of which it was a member for 47 years.

During the transition, Britain remains within the EU's economic orbit, including its single market for trade in goods and services, even though it has left its political institutions.

Johnson has insisted that he won't agree to extend the transition period beyond the end of this year. That means that if the two sides can't strike a deal by Dec. 31, Britain and the EU will then trade on terms outlined by the World Trade Organization, which would see tariffs and other restrictions imposed.

The EU has said it won't be pressured by Johnson's demand to wrap up a speedy deal, and is keen to ensure that his government does not secure an agreement that could give Britain a competitive advantage. EU negotiators want Britain to sign up to a swath of EU regulations on environmental standards, workers' rights and state aid.

Britain says it won't lower its standards in those areas, but insists it won't agree to mirror EU rules. London's negotiating mandate states: "we will not agree to any obligations for our laws to be aligned with the EU's, or for the EU's institutions, including the Court of Justice, to have any jurisdiction in the U.K."

The first potential big tussle may be on fishing rights. Johnson says Brexit means Britain takes control of its waters. The EU, meanwhile, wants to make sure its fishing fleets still have access to British waters, in much the same way as they do now.

Britain is simultaneously seeking trade deals with other countries around the world -- especially the United States.

The British government attaches great symbolic and political importance to securing a free-trade agreement with the U.S., though the economic benefit would be relatively modest. Figures published Monday by the government said eliminating tariffs on trans-Atlantic trade in goods would increase the size of the U.K. economy by only 0.16% over the next 15 years. British officials estimate a free-trade agreement would add $20 billion to U.K.-U.S. trade over the same period.

Many economists say those figures pale in comparison to the negative economic impact of leaving the EU.

A government forecast published in 2018 estimated that the British economy would be 4.9% smaller by 2035 if it ended up with a trade deal like the one Canada has with the EU than if it remained a member of the bloc.

Johnson has stated his preference for a "Canada-style" deal that would involve the elimination of tariffs and quotas on most, if not all, goods. Britain also is seeking agreement on the services sector, which makes up around four-fifths of the British economy, though Canada's deal only makes limited provision for services.

Trade talks between Britain and the U.S. are due to start within weeks and run in parallel to the EU negotiations. Britain published its negotiating aims on Monday, insisting that its state-funded National Health Service will not be on the table and that it will not compromise on animal welfare standards in order to get a deal.

"If we don't get what we want from this agreement, we will walk away," International Trade Secretary Liz Truss told lawmakers in the House of Commons.

"We're not going to be told what our standards should be by the U.S.," she added.

Johnson's opponents also claim a deal would require Britain to accept U.S. goods such as chlorine-washed chicken and hormone-fed beef that have been banned in the U.K. while it was an EU member.

Britain acknowledges it won't be able to strike a deal without opening Britain's market to American agricultural products. But the government insists the U.K. won't lower its "high domestic standards on food safety and animal welfare."

Print Headline: Britain at table with EU on trade