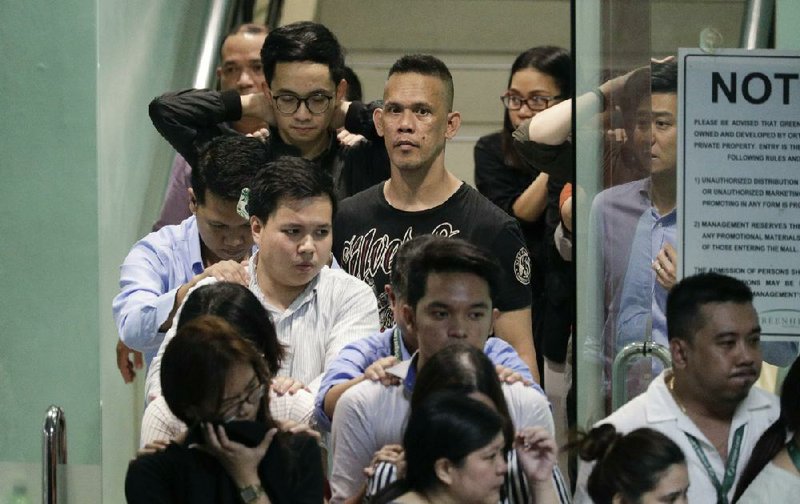 The hostage-taker releases his captives Monday at a shopping mall in Manila, Philippines. (AP/Aaron Favila)

MANILA, Philippines -- A recently dismissed security guard freed dozens of hostages and was subdued by police after walking out of a shopping mall in the Philippine capital on Monday, ending a daylong hostage crisis in an upscale commercial district near the police and military headquarters, officials said.

The former guard at the Greenhills shopping center, identified by police as Archie Paray, left the mall in San Juan City in metropolitan Manila with the remaining hostages, who were then secured by police. Several others had managed to escape earlier, police said.

"Everyone is in shock, very traumatized. We'll have to give them time to recover," said San Juan Mayor Francis Zamora, who ordered an investigation, including into how the suspect was able to enter the mall with a pistol and grenades. 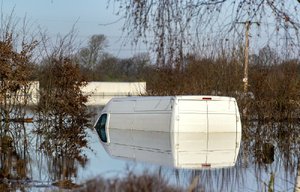 Photo by PA
Floodwaters engulf a van in East Cowick, England, on Monday. More than 80 flood warnings were still in place for England, Wales and Scotland after a storm struck over the weekend. (AP/Peter Byrne)

Instead of being immediately arrested, the suspect was allowed to speak for several minutes to journalists and authorities to describe his grievances against his former bosses, whom he accused of corruption and abuse, before police approached and subdued him.

Zamora said the suspect had a pistol with him when he walked down from a second-floor administrative office where he had held dozens of hostages, many of them mall employees.

There were between 60 to 70 hostages and people who were trapped in the mall by the standoff, Zamora said.

The gunman shot and wounded a security officer at the V-Mall, part of the Greenhills complex, Zamora said. The mall officer was in stable condition at a nearby hospital.

CAIRO -- The U.N. envoy for Libya announced his resignation on Monday, as a fragile cease-fire in the North African country continued to crumble.

Ghassan Salame tweeted he was stepping down as special representative for Libya because of his health.

Salame was appointed in July 2017, and had recently been mediating three-tiered talks between Libya's warring sides on economic, political and military tracks.

His goal had been to end the violence and troubles that have wracked oil-rich Libya since 2011, when an international military coalition helped rebels overthrow longtime autocrat Moammar Gadhafi.

U.N. Secretary-General Antonio Guterres praised Salame's efforts and would discuss "the way to ensure a smooth transition so as not to lose any momentum on the gains that have been made," said U.N. spokesman Stephane Dujarric.

Salame resigned amid an escalation in fighting in Libya, and just days after he announced the near breakdown of a shaky truce between the country's two rival governments.

One administration controls most of Libya's east and south, while a U.N.-backed but weak administration holds a shrinking area of the west, including the capital Tripoli. A patchwork of armed groups and foreign countries support either side.

37 militants get death sentence in Egypt

CAIRO -- An Egyptian court on Monday sentenced to death 37 defendants, including one of the country's most high-profile militants after their conviction of terrorism-related charges.

The Cairo Criminal Court said the defendants were charged with belonging to a local affiliate of the Islamic State group spearheading an insurgency in Egypt's Sinai Peninsula.

Among those sentenced to death was Hisham el-Ashmawi. The militant leader is a former army officer and was captured in Libya late in 2018 by forces loyal to Libyan Gen. Khalifa Hifter, a close ally of Egypt. A military court separately sentenced el-Ashmawi to death in November for his participation in scores of attacks on government targets.

Egypt has been fighting militants for years in the restive northern Sinai area and the vast Western Desert.

The men are among more than 200 defendants accused of carrying out more than 50 militant attacks that included killing high-ranking police officers and bombings that targeted the Egyptian capital's police headquarters. The charges include a 2013 assassination attempt on the Egyptian interior minister.

The court also sentenced 61 defendants to life in prison, and 85 others got sentences ranging from 5 to 15 years in prison.

KADUNA, Nigeria -- Gunmen in Nigeria killed at least 51 people in attacks on villages in the northern state of Kaduna, a lawmaker representing the area said.

The attacks on Sunday targeted villages in the Igabi and Giwa districts of the state, Uba Sani, the senator representing Kaduna Central, said on his verified Twitter account.

"The cold-blooded murder of about 51 persons in Kaduna villages has further deepened the pain of Nigerians," Sani said. "The security agencies must go to any length to ensure that perpetrators of these heinous crimes are brought to book."

Africa's most populous country of more than 200 million is experiencing attacks by armed groups targeting remote villages in the country's northwest for their livestock and granaries.