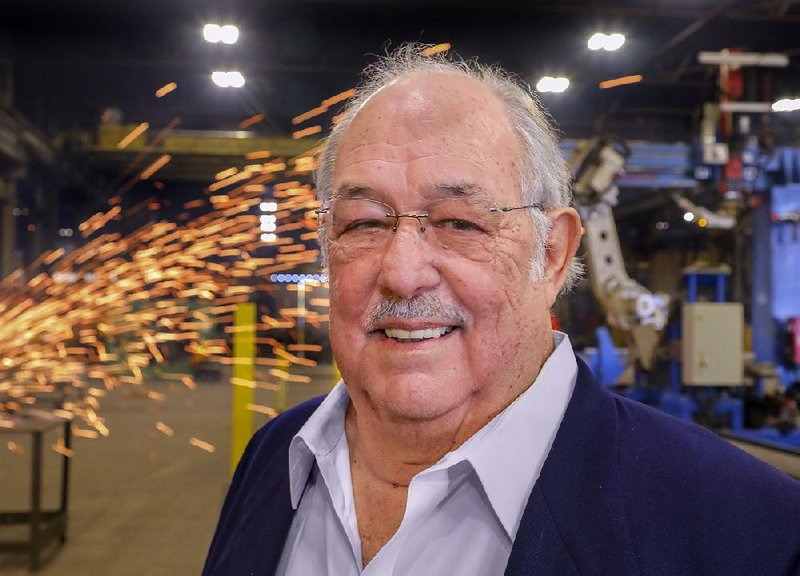 “We believe that companies are made of people. Our customers are people. Management is people. We want them to understand that you’re just like they are; you’re just in a different position in life.” -Thomas Schueck

Thomas B. Schueck, a St. Louis native who used his strong-willed personality to build a Little Rock-based steel empire and made a mark in public service and as a philanthropist, died Tuesday. He was 78.

The cause was heart failure, according to the family. He had been in declining health in recent months.

Schueck, an engineer by training, began what became Lexicon Inc. more than 50 years ago in the carport of his home with $800 in the bank and his wife, Marge Schueck, as his sole employee.

The company, now with a workforce of 2,000, went on to become involved in an array of high-profile projects -- from AT&T Stadium, home of the Dallas Cowboys professional football team, and steel mills for Nucor and Big River Steel to warehouses for Amazon, power plants, auto plants and other heavy industrial, commercial and roadway projects around the world.

"Tom Schueck was a force to be reckoned with -- both in business and in life," his son, Patrick Schueck, president and chief executive officer of the company his father founded, said in a statement.

Once established in business, Schueck served in a variety of high-profile public service positions -- he was chairman of the Arkansas Highway Commission at the time of his death -- and was generous with his time and money to a host of charitable institutions and educational endeavors that belied his imposing physical stature and reputation for bluntness.

"Above all, he was a public servant and philanthropist whose generous spirit helped countless Arkansans in their pursuit of the American dream," Patrick Schueck said.

Thomas Bernard Schueck was born on March 22, 1941. He grew up in a blue-collar neighborhood on St. Louis' south side in a single-parent home. For a time, he worked during the day while attending college at night before going to school during the day and obtaining an engineering degree.

He moved to Little Rock in 1965 to work for the company that was building Murray Lock and Dam on the Arkansas River before he struck out on his own.

"I was a factory rep, and I sold steel products, like steel bar joists and metal decks," Schueck recalled in a 2018 interview with the Arkansas Democrat-Gazette.

He eventually relocated his company from the carport to what is now the corporate headquarters in the Little Rock Industrial Park. Lexicon, which is the umbrella for a variety of construction companies, celebrated its 50th anniversary in 2018.

Lexicon's work with Nucor led to a longtime business partnership with Nucor and eventually other steel companies.

That relationship was underscored when Dan DiMicco, former chairman and chief executive officer of Nucor, introduced Schueck on his induction into the Arkansas Business Hall of Fame in 2017.

DiMicco said Schueck checked off all the boxes to be a success.

"He also didn't come up with a silver spoon in his mouth. So he had to pay attention to the nickels and dimes. He learned from scratch how to respect money, respect the bottom line, be conservative yet be willing to take chances. He was a true entrepreneur in every sense of the word."

Schueck was proud of all his companies' projects but noted in the 2018 Democrat-Gazette interview that many are attention-getters, such as the roof of the AT&T Stadium, which he described as "just another steel truss job."

"It might be the biggest project as far as people talking, but as far as dollar value, no, and as far as complexity, no," he said.

Another line of projects that attracts attention is the more than 100 golf courses Schueck built through a subsidiary, Heritage Links. The courses are throughout the United States, including the Blessings Golf Club in Fayetteville, as well as in Puerto Rico and the Bahamas. This despite the fact that Schueck didn't play golf.

What fascinated Schueck was projects that involved lifting 2,000 tons of steel to a height of 200 feet or moving an entire plant from the United States to Trinidad. The company took apart a plant used to make direct reduced iron, put the pieces on barges for a 2,200-mile journey through the Gulf of Mexico, took it off the barge, rebuilt it and made it operational.

"That, to me, was one of the finest projects ever done," he said.

Gus Vratsinas, board chairman of Bailey Construction, has done business with Schueck since the 1970s and worked closely with him on the Arkansas Industrial and Economic Foundation.

"He always made the meetings, always said what he thought and made us all better," Vratsinas said. "I think we lost a good one there, not only in the business community but he served the city and the state in many capacities and his heart was in the right place."

He recalled Ron Mathieu, the airport's executive director at the time, telling him that Schueck was always prepared.

"He read everything from A to Z that was sent out to us ahead of time to get ready for the meetings," Vratsinas said. "I try to emulate that. That's why you can ask intelligent questions, especially at those committee meetings."

In 2011, Gov. Mike Beebe named Schueck to the Arkansas Highway Commission for a 10-year appointment. He became commission chairman this year.

"He was a class gentleman, a great businessman and really good, kindhearted guy," Beebe said. "His heart was as big as his body. You didn't always know it, but he was a huge, gentle man. He came across gruff sometimes, but he was a true gentleman and is going to be missed."

Less than two weeks ago, Schueck presided over his last meeting when the commission picked Lorie Tudor to replace Scott Bennett as director of the Arkansas Department of Transportation after the latter announced his retirement.

"My time as director coincided with his time on the commission -- we kind of came into our roles together -- and it was a new experience for both of us," Bennett said. "But I learned a lot from Tom about leadership and how to handle tough situations. Whether he did it on purpose, I don't know, but he was a great teacher."

A fellow member of the commission, Robert S. Moore Jr. of Arkansas City, said Schueck loved to debate but not for debate's sake.

"He could be tenacious, he could be stubborn, but he coupled that with a long-term vision and goal that, quite honestly, almost always resulted in success," Moore said. "He had that unique ability to cuss you and buy your lunch all at the same time."

No one who knew Schueck could forget that personality.

Gov. Asa Hutchinson, in a statement, while praising him for his leadership in business and public service, creating jobs and building the steel industry in Arkansas, noted that "his blunt talk and his wry sense of humor will be missed."

Dean Kumpuris, a longtime member of the Little Rock Board of Directors and a physician, knew Schueck as a "friend, benefactor and patient."

Everyone knew his gruffness, but few knew his generosity, not only with his financial wealth but as a mentor, Kumpuris said.

"He was always helping people that didn't have everything in life."

To be sure, his name adorns the engineering school at the University of Arkansas at Little Rock, but Kumpuris said there are scores of examples of his generosity that no one will ever know except the recipient.