Democrats in Arkansas decide to back Biden 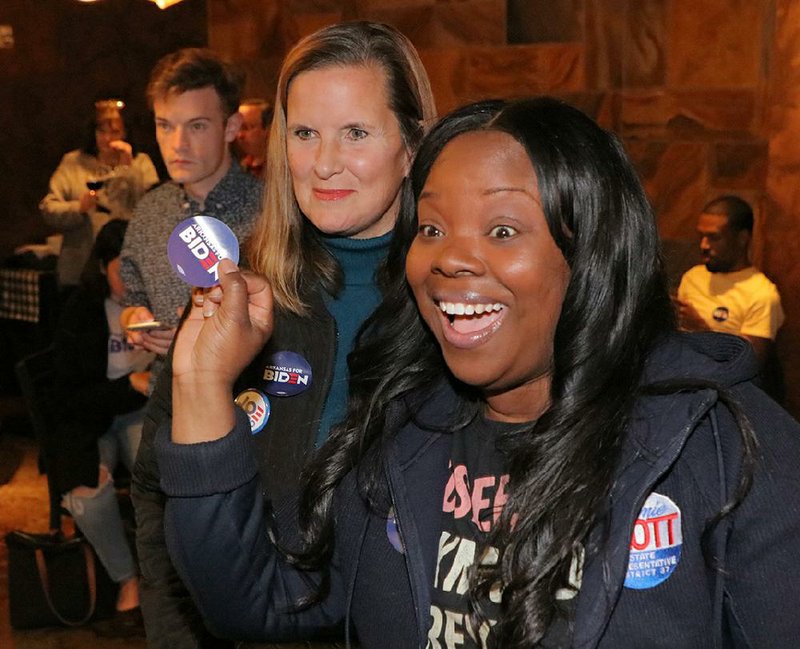 All three candidates appeared likely to claim delegates to the Democratic National Convention in Milwaukee. Thirty-one delegates were up for grabs.

The win in Arkansas and a string of other Southern states, combined with other victories farther north, helped propel Biden, 77, to the front of the pack.

U.S. Sen. Elizabeth Warren of Massachusetts was in fourth place.

Former South Bend, Ind., Mayor Pete Buttigieg, who suspended his campaign Sunday, and U.S. Sen. Amy Klobuchar of Minnesota, who dropped out of the race on Monday, followed. Both candidates have thrown their support to Biden.

The remaining candidates lagged far behind.

The unofficial returns were:

The unofficial returns were:

Biden, who served as vice president from 2009 to 2017, claimed victory in Arkansas with help from some of the state's most high-profile Democrats.

Former U.S. Sens. Mark Pryor and David Pryor, who both served with Biden in the Senate, were early supporters. Another former colleague, U.S. Sen. Blanche Lincoln, added her endorsement over the weekend.

At the Copper Grill in Little Rock, Biden supporters gathered Tuesday to await the results.

They were not disappointed.

"I've been yelling and screaming already," Chesterfield said, as early returns flashed on the screen. "We're carrying the South. Not just Arkansas. We carried Virginia, North Carolina. We're in the running in Massachusetts, so we're excited."

The victory bodes well, Chesterfield said, for the candidate and the party he hopes to lead.

"It says that Biden resonates with people as a genuine human being who cares about folks and who has a message that can unite this country. That's what this is about: Uniting this country and moving this country forward," she said.

Biden supporters weren't the only ones crowing about Tuesday's vote.

"Tonight, President Trump is the clear winner in Arkansas with Republicans more united than ever behind him," Trump Victory spokeswoman Danielle Alvarez said in a written statement. "If Joe Biden is the best Democrats can put forward, Arkansans can look forward to another four years of fairer trade deals, job growth, and tremendous tax cuts under President Trump's administration."

Biden won Arkansas despite being heavily outspent by Bloomberg, a self-funded New York billionaire who flooded the airwaves with ads in the weeks leading up to the vote.

Bloomberg, who visited Arkansas three times after declaring his candidacy, invested heavily in the state, hiring 22 employees and opening offices in Little Rock, Fayetteville and Memphis.

Biden never visited the state, though his wife made two trips late in the campaign. Jill Biden, stopped in Little Rock for a fundraiser on Feb. 6, returning on the Sunday before the election to attend morning worship services at North Little Rock's First Baptist Church.

Biden's decision to bypass the state surprised some Arkansans.

Despite his absence and his lackluster early polling, Biden ultimately was embraced by Democrats in Arkansas.

Bloomberg, gambling that he could jump-start his campaign on Super Tuesday, bypassed earlier contests in Iowa, New Hampshire, Nevada and South Carolina, focusing instead on Arkansas and other places.

The strategy enabled him to win in American Samoa, but he had less success on the mainland.

It appeared Sanders would fall short of his 2016 performance, when he won 29.7% of the vote in Arkansas' Democratic primary. But he appeared to have won in Washington County, home of the University of Arkansas, Fayetteville.

The state Democratic Party held its Super Tuesday watch party at the Library Kitchen + Lounge in the River Market. By the time the polls closed at 7:30 p.m., it was standing-room only as every booth and table was filled.

"I didn't expect Biden to be so high," he said.

His friend, fellow Sanders voter Darren Boyd, said Super Tuesday was shaping up to be a "microcosm" of how voters across the country saw Sanders -- a compelling candidate but too idealistic for them to be comfortable voting for him.

"America, at the moment, is a country that just isn't quite ready for Bernie," Boyd said.

Boyd promised to vote for the Democratic nominee regardless of who claims it. Dominguez, branding himself a "Bernie-or-bust" voter, would not.

"Maybe if I lived in a swing state I'd consider it," he said, "but it would depend on how I felt that day."

Kim Zimmerman, 58, a Warren supporter, said she would enthusiastically support Biden if he became the nominee.

Biden "is the only one who can beat Trump," because voters know he would surround himself with "smart, decisive, experienced people," she said.

Blake Hyland, 24, an early Buttigieg supporter who voted for Warren, said he was "voting blue" regardless of whether it was Sanders, Biden or anyone else.

"A return to normalcy would be nice," he said.

Scott, at the Copper Grill, said Democrats have rallied behind a candidate who can unify the party and win in November.

"I feel like he's the best person who can find common ground," she aid.

"He won over every demographic," in South Carolina on Saturday, she said. "Regardless of education, race, gender [and] age, those people saw what I see in Joe Biden and that made my heart explode."