While individual income tax collections exceeded the forecast for February, sales and use tax collections fell short of predictions. They are the state's two largest sources of general revenue.

February's total collection exceeded the previous record for the month, $459.1 million in 2019, said Whitney McLaughlin, a tax analyst for the finance department.

"This is encouraging considering some of the headwinds we are facing globally and nationally in regard to COVID-19," the Republican governor said in a written statement, referring to the spread of the coronavirus. "As a state we must continue to budget conservatively even though our economy remains strong."

Tax refunds and some special government expenditures come off the top of total general revenue collections, leaving an amount that state agencies are allowed to spend.

February is the eighth month of fiscal 2020, which started July 1.

The 4.3% increase in total gross revenue over that received in the previous fiscal year is "a healthy number and in line with what we have seen in recent months," said John Shelnutt, the state's chief economic forecaster.

The general revenue budget for fiscal 2020 totals $5.75 billion, an increase of $124.1 million over last fiscal year's budget, with most of the increase targeted for human services and education programs. The Legislature and governor enacted the budget during last year's regular session.

This morning, the governor is to unveil his proposed general revenue budget for fiscal 2021, which starts July 1, to the Legislature's Joint Budget Committee.

The fiscal 2021 budget will be considered in the fiscal legislative session starting April 8. The Joint Budget Committee will hold hearings on it through March 12.

In the 2019 regular session, legislators in Arkansas also approved a variety of tax measures.

In the 2019 regular session, lawmakers also enacted a measure to require out-of-state internet retailers without a physical presence in the state to collect and remit sales tax on in-state purchases; a measure to phase in future cuts in corporate income tax rates; and a law to raise more funds for highways and roads by imposing a wholesale sales tax on gas and diesel fuel, raising registration fees on electric and hybrid vehicles. and reallocating state funds.

According to the finance department, February's general revenue included:

Last month's surge in this category was driven by one more Friday payday compared with a year ago, Shelnutt said.

This category lagged in the forecast largely because of collections lagging from business-related sectors, such as wholesale, construction and rental leasing, "whereas the consumer side was up nicely with better than 5% growth in retail and restaurants and motor vehicles up more than 12%, so quite a disparity there between those two groups," Shelnutt said.

Sale tax collections last month from motor vehicles increased by $2.9 million over the same month a year ago to $25.7 million, Shelnutt said.

Collections from online sales in February totaled about $4 million, which was double the projection for the month, said Scott Hardin, a spokesman for the finance department.

The drop is because of Oaklawn Racing Casino Resort in Hot Springs and Southland Casino Racing in West Memphis paying a lower state tax rate under Amendment 100 to the Arkansas Constitution, approved by voters in November 2018.

Amendment 100 allows Oaklawn and Southland to operate as full-fledged casinos and authorizes new casinos in Jefferson and Pope counties. The Saracen Casino Annex, across the street from the Saracen Casino Resort under construction in Pine Bluff, started limited operations in late September. No casino has been licensed yet in Pope County by the Arkansas Racing Commission.

Under Act 416 of 2019, casino gambling general tax revenue above $31.2 million will be diverted to the state Department of Transportation, which will be guaranteed a minimum of $35 million a year from casino revenue, a restricted reserve fund or other sources. The money is part of a plan to raise more money for highways and roads.

In 2019, tax modernization was a key theme with states changing their tax codes to implement online sales tax collection and expanding taxes to new products, although net revenue changes were still minimal in an aggregate sense, the National Conference of State Legislatures said in a recent report.

Collective actions by 50 states and the District of Columbia resulted in a net tax increase of about $5 billion, or 0.5% above the prior year's collections, with motor fuel taxes producing the largest increase totaling $2.5 billion and Ohio and Illinois primarily fueling the increase, the conference reported.

A handful of states, including Arkansas, made changes to their personal income tax rates and brackets resulting in a revenue decrease in this tax category, the conference reported. 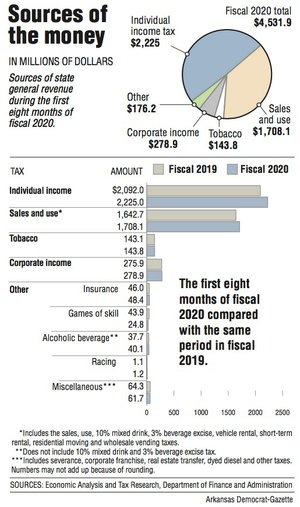