Some exhibitors forced into a virtual space, others cancel by DAVID MCHUGH AND ALEXANDRA OLSON THE ASSOCIATED PRESS | March 4, 2020 at 2:02 a.m. 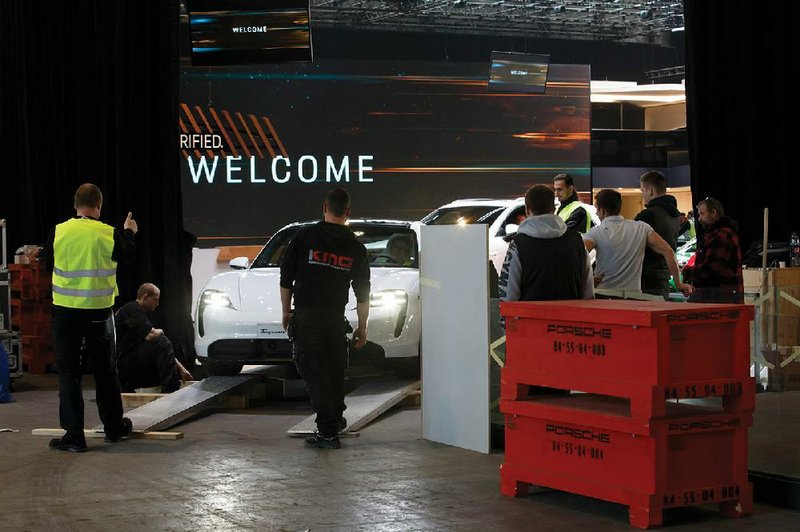 Workers dismantle a booth after the 90th Geneva International Motor Show, which was scheduled to begin Thursday, was canceled by Swiss authorities as a precaution against the spread of the coronavirus. (AP)

FRANKFURT, Germany -- Fine wines and hipster gin. Hunting rifles and knives. Contemporary paintings and million-dollar sports cars. They're all marketed at trade events that are quickly going dark across the globe because of the new coronavirus -- and taking with them sales opportunities that may be difficult to make up.

Some companies are taking their shows online with virtual events they stream from their headquarters to reach customers anyway.

But marketing experts and executives warn that there is no substitute for face-to-face contact with potential clients, as exhibition companies try to total up the losses being suffered by an industry that also pumps billions into hotels, restaurants and cabdrivers' wallets.

The Geneva International Motor Show resorted to putting automakers' product unveilings and news conferences online Tuesday after this year's show was canceled. BMW presented its sleek i4 electric concept car at a digital news conference from Munich, while competitors Daimler and Volkswagen held their own online events.

The Geneva show was canceled after authorities barred gatherings of more than 1,000 people to halt the spread of the virus. While some car companies were already trying online presentations before the virus in an effort to expand their reach to social media, there is no real substitute to seeing a product in person or meeting people in the industry.

"It's not just about purchases. For many products it is also about reinforcing a kind of community-building," said Gernot Gehrke, professor of management and event-industry marketing at the University of Applied Sciences and Arts Hanover.

Trade shows, which can generate sales long after the event, are "a point of contact in a customer journey, if you like, that aims at a stable relationship to customers, and also to people and organizations that might become customers."

They are also big business. Exhibitors pay in advance to book space and lose their money on such last-minute cancellations. The Geneva auto show was expected to generate $250 million for the wider city area. "This is a dramatic loss for everyone," said Olivier Rihs, managing director of the Geneva show, which plans to go ahead next year.

Trade fairs are a tradition in Germany, where some 160 to 180 are held every year, reaping $16 billion from visitors and exhibitors and pumping $31 billion into economies as well as providing 230,000 jobs, 100,000 of them full time.

Art Basel, the modern and contemporary art fair, moved up the debut of a new digital initiative after its Hong Kong fair was canceled because of the virus. The online viewing rooms will be live March 20-25 after two VIP preview days. The digital initiative will be open for free to galleries that had been accepted to participate in the Hong Kong fair. The rooms allow collectors to browse through thousands of works and directly contact galleries.

But online showings would be a poor option for the luxury watch industry, which is reeling from the cancellation of two major industry events, Baselworld and Watches & Wonders Geneva.

"The watch industry is a touch-and-feel industry. The only way to get a feel for these incredible luxury products is to hold them in your hands and look at them and engage in the emotion of what goes into the making of these incredible masterpieces," said Roberta Naas, who has written several books on the watches and founded the website ATimelyPerspective.com.

Other big cancellations include the Mobile World Congress last month in Barcelona, Spain, the biggest industry show for wireless technology.

In Chicago, the International Housewares Association this week canceled its annual show that was scheduled for March 14-17. It was expected to draw more than 56,000 visitors and more than 47,000 nights booked in the city's hotels.

A slew of others have been postponed that might be less known to the public but are a big deal in particular industries. This month, the exhibition center in Duesseldorf, Germany, has alone seen the postponement of fairs for: wine and spirits, metalworking and manufacturing technology, energy storage, and wire and cables. In Nuremberg, IWA OutdoorClassic, a hunting and outdoor gear show, was pushed back to September.

Gamers Developers Conference, a big event for video-game developers in San Francisco, was postponed last week after a growing number of companies dropped out, including Amazon, Sony, Facebook, Electronic Arts, Unity and Epic. Facebook is planning to go forward with conference-related announcements by video, online question-and-answer sessions and other digital formats. But smaller game developers and software companies can't make up for the loss of exposure of the March 16-20 event.

Jacob Navok, chief executive officer of Genvid, said his software development company had planned several announcements at the conference regarding games. He had planned a keynote address, a forum discussion and an evening party with more than 120 guests. Unlike Facebook, his company does not have the capacity to hold virtual versions of those events.

"Nobody would watch because I have no way to market that. I'm not able to draw people to these things by myself," said Navok.

Instead, Navok said he plans to spend the week flying to San Francisco, Los Angeles and Seattle to meet with some of the major companies. He also will repackage his keynote address for interviews with industry journalists. But he will not be able to meet with many game publishers from other parts of the U.S. and Canada. And he will miss out on the impromptu interactions that happen when people stop by his booth.

"It will suffice, but it cannot replace that in-person presentation and the ability to meet the people that randomly happen across your product," said Navok. "It's a big week of announcements. We are still going to do it. We are going to have to -- but that in-person momentum is not going to be there."

Information for this article was contributed by Kathleen Foody of The Associated Press.