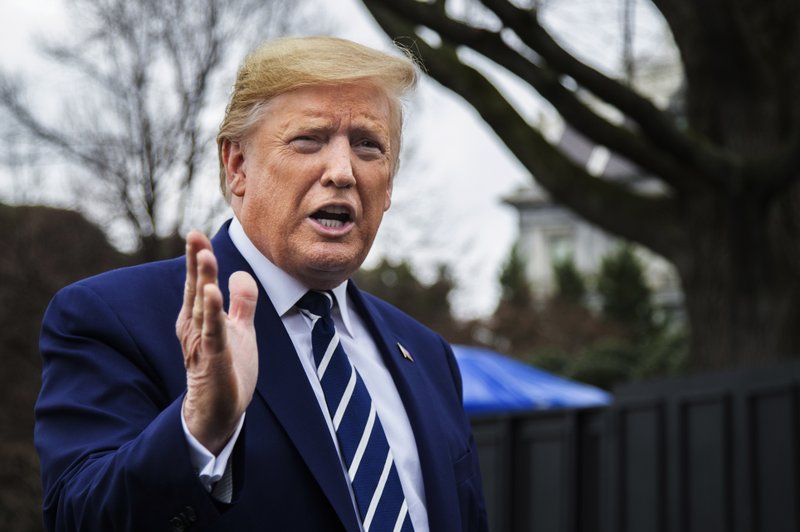 President Donald Trump speaks Tuesday outside the White House. He says he will not accept a reauthorization of surveillance provisions unless he receives a reforms bill from Congress. (AP/Manuel Balce Ceneta)

WASHINGTON -- President Donald Trump told his attorney general and top GOP lawmakers he will not extend surveillance authorities that expire this month unless Congress sends him a bill that incorporates changes, according to a senator present for the Tuesday night meeting at the White House.

Sen. Rand Paul, R-Ky., who has led efforts to curtail the federal government's ability to spy on Americans, said Trump "made it exceedingly clear" he will not accept a straight reauthorization of the surveillance provisions. Trump wants changes before he will sign the bill into law, Paul said.

"The president said he's not signing without something happening," Paul told reporters after the nearly 90-minute meeting with top lawmakers. "He pushed back very vigorously and said, 'We're not doing this.'"

Another person familiar with the meeting confirmed the account. The person was unauthorized to discuss the meeting and granted anonymity.

At the White House, Attorney General William Barr made the case to the president that the Justice Department could make regulatory changes to satisfy the critics of the surveillance programs. Barr and Senate Majority Leader Mitch McConnell want to simply renew the surveillance authority and work on changes that eventually could be legislation. McConnell made his preference for that approach known at the meeting, those involved said.

But Barr and McConnell were outnumbered by the others who attended the meeting that included House Republican leader Kevin McCarthy and Republican Reps. Doug Collins, Mark Meadows and Jim Jordan. Paul, Meadows and Jordan have advocated an overhaul of the surveillance laws and have been pressing Trump to go along. Sen. Lindsey Graham, R-S.C., who was also present, has sided with Barr's approach, pushing for continuing the surveillance and taking the months ahead to work out the reforms.

Barr has urged Congress to quickly renew the provisions, which are used by the Justice Department to fight terrorism. McConnell and House Speaker Nancy Pelosi, D-Calif., are supportive, but each side has lawmakers who are critical of the surveillance tools and want to make changes.

Bipartisan negotiations are ongoing as the provisions are set to expire March 15.

No resolution was reached Tuesday, those involved said. Paul indicated the president may be willing to consider a stopgap measure that continues the surveillance provisions for another week or so if the talks are progressing.

McCarthy has said he is working with Democrats in the House and is optimistic that changes can be hammered out in time to vote before the provisions expire next week. Paul said McCarthy told Trump as much at the meeting.

At issue are three surveillance provisions, including one that permits the FBI to obtain court orders to collect business records on subjects in national security investigations. Another, known as the "roving wiretap" provision, permits surveillance on subjects even after they've changed phones. The third allows agents to monitor subjects who don't have ties to international terrorism organizations.

The FBI calls the provisions vital in the fight against terrorism and stresses that none are tied to the surveillance problems identified by the Justice Department inspector general during its investigation into the Russia probe. The inspector general said in a report last year that the FBI made serious mistakes and omissions during four applications to eavesdrop on former Trump campaign adviser Carter Page, including omitting information that did not support their suspicions that Page was an asset of a foreign government.

House Intelligence Committee Chairman Adam Schiff, D-Calif., and House Judiciary Committee Chairman Jerrold Nadler, D-N.Y., have introduced their own legislation that would make some changes to the law, but it has stalled because it does not go as far as many Democrats would like.

Schiff said Tuesday that he is negotiating with the Democrats who want more changes and with Republicans, but it's unclear if they will find agreement.

Some Senate Republicans have suggested adding an extension to legislation to provide dollars to the coronavirus outbreak, but Schiff, McCarthy, Pelosi and other House lawmakers have said they want it to move separately.

Schiff said that in negotiations they have "incorporated a lot of the proposals in terms of privacy protections, and I think narrowed significantly the differences on any remaining issues."

"I hope we can get to yes, and then we'll have to see where the Republicans are," Schiff said. "What I'm focused on doing is coming up with a bill that's good policy, that has good reforms in it that preserve our ability to get the intelligence we need to protect the country."

Information for this article was contributed by Michael Balsamo and Aamer Madhani of The Associated Press.