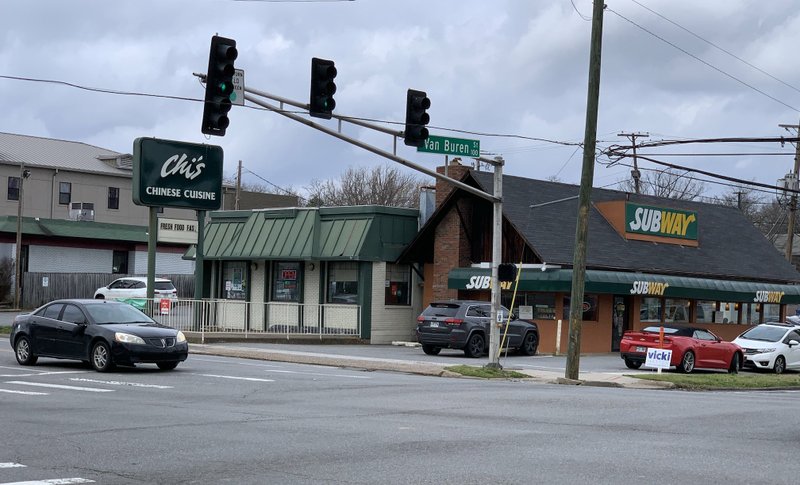 Chi's Too and the Subway at West Markham and Van Buren streets will become the new/old home of Black Angus, with a June target to open. The corner housed the original Black Angus starting in 1960. (Arkansas Democrat-Gazette/Eric E. Harrison)

Black Angus Restaurant will have a new home. Which turns out to be its old home.

The venerable burger-steak-plate lunch establishment, which is being forced to vacate the building at 10907 N. Rodney Parham Road, Little Rock, where it has been serving charcoal-grilled steaks and burgers for 30 years, is going back to its original location, says owner Karla Creasey — the corner of West Markham and Van Buren streets.

"It's the greatest thing I could have ever thought could happen," she says.

She says she hopes to be open by June. Deadline to leave her current location is March 31.

Black Angus opened at Markham and Van Buren in 1960, subsequently moved to South University Avenue, then moved again in 1990 into the west Little Rock building that had previously housed an outlet of the now-defunct Kenny Rogers' Roasters chain.

Creasey explains she'll be taking over two existing restaurants that have grown up at the intersection, where Hillcrest meets Midtown, in the interim: Chi's Too, a sideways descendant of the Chi's Chinese restaurant mini-chain, which took over what had been a Kentucky Fried Chicken, and a Subway.

The Chi's building will undergo complete remodeling, including the creation on its west side of a drive-thru, accessible from A Street behind the restaurant. The Subway will be demolished to provide parking. "That building is too old for long-term use," Creasey says. "We plan to occupy that lot for a long time."

Creasey says while looking at a lot of possible locations, none of which were the right fit for her business, she got a phone call from Morris Harper, the son of Black Angus founder Oliver Harper. The family still owns the lot.

"I was trying to figure out what I would have to give up. And he told me, 'This is so easy. Just go home. Just go back where Daddy put you.'"

The June target is partially based on the amount of remodeling that the building will require, including plumbing and electrical work and the building of a new charcoal grill — Black Angus has grilled its steaks, burgers, etc., exclusively on charcoal for 60 years.

Creasey said she wasn't worried about her business being inaccessible when there are football games in War Memorial Stadium across the street: "Every place has its pros and cons."

Black Angus customers were shocked to see the Jan. 10 post on the restaurant's Facebook page (facebook.com/blackanguslittlerock): "The rumors are true: WE ARE RELOCATING!" But not as shocked as Creasey said she was when she received her notice to vacate — on New Year's Eve — from the owners of the Rodney Parham shopping center that formerly housed a Kmart and in which her restaurant occupies an outlying plot. It is now being developed into Premiere Medical Plaza by Premier Gastroenterology Associates and real estate firm Newmark Moses Tucker.

Creasey received a flood of suggestions for new locations from customers and the community. Complicating the search was her initial desire to stay close to her current spot and the need for a drive-thru window since she estimates that's responsible for about a third of her business: "This is one of the only places where you can phone in an order for a T-bone and pick it up through the window," she said in January. 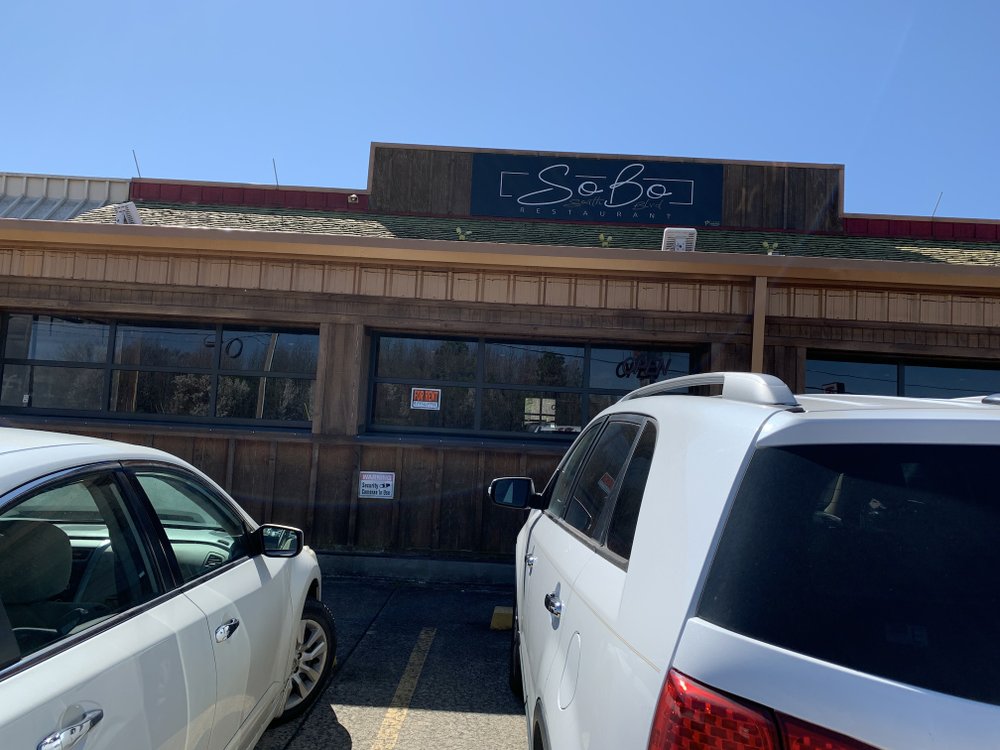 There's a "for rent" sign in the window of the former South Boulevard on Maumelle Boulevard. (Arkansas Democrat-Gazette/Eric E. Harrison)

South Boulevard, aka SoBo, 10840 Maumelle Blvd. on the North Little Rock side of Maumelle, was one of two Arkansas restaurants that chef Gordon Ramsay featured on his 24 Hours to Hell and Back season finale Feb. 25. But the "rescued" restaurant didn't survive even unto the airing of the show, which helps struggling restaurants by renovating their interiors and menus under Ramsay's guidance, on Fox. Our reporter Nyssa Kruse reported last week that, according to Scott Hardin, spokesman for the state Alcoholic Beverage Control division, the restaurant lost its liquor license Jan. 24 due to nonpayment of sales taxes. And the locks on the building were changed in the last couple of weeks because the restaurant had a considerable amount of unpaid rent, says property manager Denise Sery, who added that SoBo had been struggling to pay rent in full and on time since it took over the lease in March 2019. (Defunct previous occupants of the space include GiGi's Soul Food Cafe and Lounge and Nashville Bar and Grill.) Owner Jermaine Burton also operates Maumelle's Lucky's Sports Bar & Grill. There's now a "for rent" sign in the window. Oh, and the other Central Arkansas restaurant featured on the TV show, Bear's Den Pizza in Conway, remains open.

The River Market location of Damgoode Pies, 500 President Clinton Ave., Little Rock, is expected to close March 15, according to manager Chris Lopez. The location opened in 2015, the latest in a long series of brewpubs and restaurants to occupy that space. Damgoode Pies will continue to operate its original location, 2701 Kavanaugh Blvd. in Little Rock's Hillcrest, and one at 6706 Cantrell Road in Little Rock's Pulaski Heights.

And speaking of Pulaski Heights, the windows and door of what used to be That Ramen Place, 5711 Kavanaugh Blvd., have been covered by a raffish pinkish paper or some other kind of semi-opaque substance, indicating that some kind of work is being done within but meant to be kept out of public view. Speculation on what that may be is, at this point, idle.

A couple of our eagle-eyed readers report the presence of large trash receptacles around the former Applebee's at 4333 Warden Road, North Little Rock, which has been vacant for a couple of years. Previous reports, as yet unconfirmed, indicate that a Red Robin is in the works there.

You Scream Holdings LLC will open its latest Dairy Queen outlet this summer as a part of the current Big Red Store at 710 E. Beebe Capps Expressway in Searcy. You Scream President Blake Lively cites the proximity of the store to Harding University. As usual, when the franchisee, which also operates DQs in Sherwood, Little Rock, Cabot, Saline County, Hot Springs Monticello and Greenbrier, announces the grand opening, they'll give away one free item a week for a year to the first 100 DQ fans to buy a cake. Hours will be 10 a.m.-10 p.m. Monday-Friday.

Rafael Rios of Yeyo's Mexican Grill in Bentonville is one of 20 semifinalists in the 30th annual James Beard Awards' "Best Chef: South" category. (For this purpose, "South" includes Alabama, Arkansas, Puerto Rico, Florida, Louisiana and Mississippi.) Rios is competing against chefs from New Orleans; West Palm Beach, Miami and Coconut Grove, Fla.; Orange Beach, Homewood and Mobile, Ala; San Juan, Puerto Rico; and Ridgeland and Biloxi, Miss. The James Beard Foundation handed out the list of Restaurant and Chef Award semifinalists last week; the foundation will announce the finalists March 25 and give out the awards at a gala May 4 at the Lyric Opera of Chicago. Matthew McClure, executive chef of The Hive in Bentonville, was a "Best Chef: South" semifinalist six years running, 2014-19. However, no Arkansas chef has ever won the award. Arkansas' only two James Beard winners have been in the American Classics category — Jones Bar-B-Q Diner in Marianna in 2012 and, announced last month, Little Rock's Lassis Inn.

Downtown Jonesboro will be the site of the Oasis Arts & Eats Fest, 1-7:30 p.m. May 2. It celebrates arts and food in northeast Arkansas, this year incorporating a home-baker cake competition. March 31 is the deadline for vendors, artists and cake competitors to sign up; visit oasisartsandeats.com.

Andrea Allen and Elika Liftee of Onyx Coffee Lab in Rogers took first places — Allen is the new U.S. Barista Champion, and Liftee, the new Brewers Cup Champion — last month at the United States Coffee Championships in Orange County, Calif. It is, according to a news release, the first time that two people from the same company have taken the top spot in two competition categories. They will both travel to Melbourne, Australia, in May to compete for the world titles.

And YUM! Brands Inc. (which includes KFC, Taco Bell and Pizza Hut) has agreed to end use of expanded polystyrene foam packaging (frequently but incorrectly called "Styrofoam") globally by 2022. The company mostly uses the stuff in side-dish take-out containers.