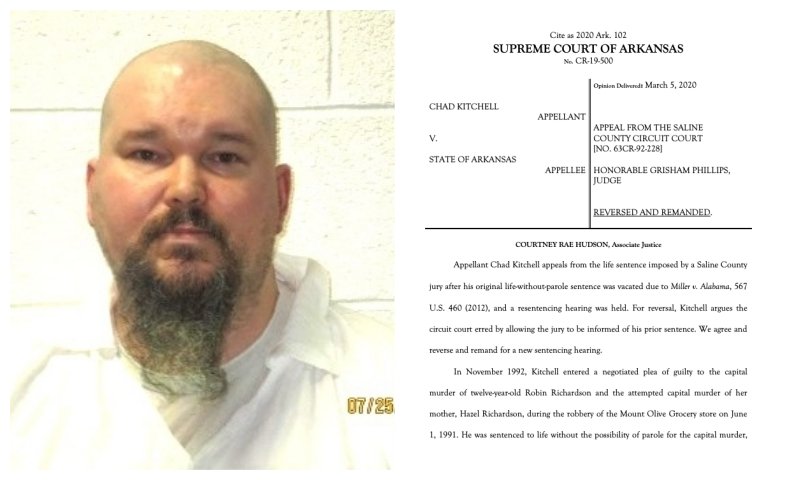 Chad Kitchell is shown beside a screenshot of the Arkansas Supreme Court's opinion ordering a new sentencing hearing.

The Arkansas Supreme Court on Thursday ordered new sentencing for a man convicted of the 1991 murder of a 12-year-old girl during a grocery store robbery, the second time his life sentence has been overturned.

Chad Kitchell was 17 years old when he robbed the Mount Olive Grocery store in Saline County, killing Robin Richardson and wounding her mother, Hazel Richardson, in the process. His original life sentence was vacated, however, after the U.S. Supreme Court ruled in 2012 that minors could not be handed life-without-parole sentences,

In 2018, Kitchell was re-sentenced under the provisions of the Fair Sentencing of Minors Act, which had been passed by the Legislature earlier that year to comply with the Supreme Court’s ruling.

Under that law, Kitchell was sentenced to life, with the opportunity for parole after 30 years.

Kitchell’s attorneys argued, however, that his second resentencing was flawed by prosecutors who told the jury that Kitchell had been previously sentenced to life in prison, and who described the re-sentencing process as “grueling” for the Richardson family.

By a 6-1 decsion Thursday, the state Supreme Court agreed, and remanded the case for Kitchell to face sentencing for a third time. He can still face a sentence range of 10 to 40 years, or life.

“We are mindful of how difficult another resentencing hearing will be for the victim’s family,” wrote Justice Courtney Hudson for the majority. “However, the introduction of evidence during a sentencing trial must be governed by our rules of admissibility and exclusion for the proceeding to pass constitutional muster.”

The decision did not overturn Kitchell’s convictions for capital murder and attempted murder. He remains incarcerated at the Tucker Maximum Security Unit.

Justice Shawn Womack offered the sole dissent from the majority, writing that any prejudice Kitchell at his second sentencing hearing was not enough to warrant overturning the sentence.