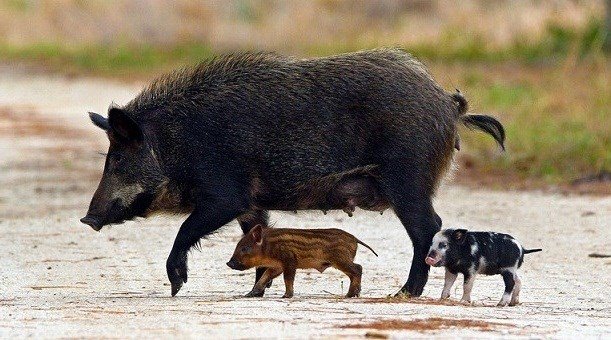 An adult female feral hog trots with her piglets in a Buffalo National River media photo.

More than 670 feral hogs were killed last month in Arkansas thanks to a U.S. Department of Agriculture program, the state Game and Fish Commission said.

Spokesman Keith Stephens said helicopter crews flew over portions of east and northeast Arkansas intermittently from Feb. 10 to Feb. 29 as part of a program offered for free to states by the federal agency.

“It’s very efficient because you can cover a lot of area,” Stephens said, adding that without leaves on trees in the winter, it’s easy to see the hogs from the air.

He said the carcasses were left on the ground. Some animals may eat the hogs, but otherwise "mother nature takes its course."

The commission cannot collect and donate the meat, Stephens said, because of regulations on meat inspections and on feral hog transport.

Stephens said the commission’s usual method of hog removal is trapping a group, called a sounder, and then killing the hogs. He said more than 6,000 hogs were killed last year, the majority in trapping efforts.

Trapping is more efficient than allowing Arkansans to hunt the animals, he said, because trapping captures an entire sounder whereas a hunter may only be able to shoot a couple hogs at a time.

Picking off one or two animals from a sounder can also scare the hogs into moving out of an area, Stephens said, so any trapping operation in progress would have to move and start over.

"There’s no doubt that hunters remove some hogs and it may be effective at removing individuals, but the disturbance to sounders negatively affects ongoing trapping efforts and limits our ability to keep hogs within a specified trapping area," Stephens said in an email. "Also, disturbance to other wildlife during critical seasons such as fawning, nesting, etc. may negatively impact those native species for which we manage as a public trust."

Hunters are only allowed to kill feral hogs on some public lands during hunting seasons for other animals, such as deer and bears. Stephens said anyone, with the exception of someone who has had a hunting license revoked, can kill feral hogs on private land any time of year with landowner permission.