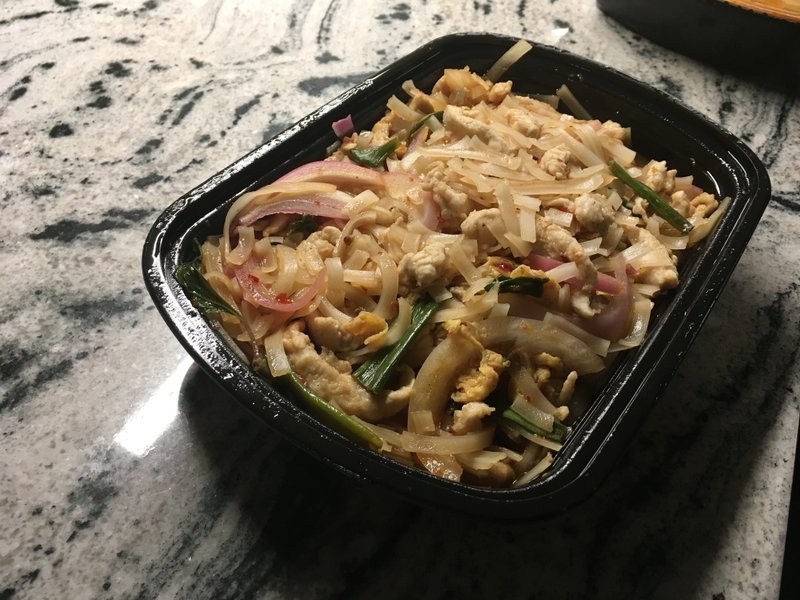 As a takeout dish, Pad Thai and Mapo Tofu filled the bill as well as our stomach. It was mildly spiced, flavorful and plentiful. (Arkansas Democrat-Gazette/Philip Martin)

Eight years ago, when I saw a sign in the Promenade at Chenal in west Little Rock for a restaurant I read as Awlin's, I assumed it specialized in Louisiana cuisine. Awlin's, I suspected, was a truncated "N'awlins," a popular pronunciation of New Orleans.

Good to know, I thought. If I'm struck by the urge for some shrimp and okra gumbo while waiting for the Apple Genius to recover my phone contacts, I'll know where to go.

It was a couple of years before I noticed the periods that set off the initial A and W from the Lin's. Then I decided it must be some sort of fusion Creole-Asian place. I thought that was a fun concept.

Then I wandered back over to my side of University and forgot about it.

But then, last month, a second location of A.W. Lin's opened in the 300 block of Main Street in Little Rock along a burgeoning restaurant row that includes Samantha's, Brewski's, Soul Fish, Bruno's and Allsopp & Chapple — all within walking distance from our new house. (Open an outdoor patio section where we can bring dogs, and it would be perfect.)

Somewhere in the past few years, I'd come to understand that A.W. Lin's was a straight-up Chinese restaurant, though when I finally looked at the menu I realized that wasn't quite right.

As everyone sophisticated enough to read a restaurant review probably knows, what we think of as traditional Chinese restaurants don't really serve traditional Chinese cuisine. Real Chinese cuisine is a large subject; there are dozens of regional cuisines including Sichuan, Yunnan, Beijing, Hunan, Xinjiang, Tibetan, Mongolian and some that no Westerner apart from late great Jonathan Gold or late great Anthony Bourdain ever managed to choke down. So it's not profitable to get hung up on authenticity.

A.W. Lin's isn't traditional authentic Chinese or traditional American Chinese. It's what happens when malleable Asian cuisine collides with the American palate — which you might assume means gets dumbed down. But in this case, it's nothing so cynical as a business plan. A.W. Lin's has a character of its own and deserves the loyalty of its customers.

Let's call the menu pan-Asian, as it assimilates cuisines from across the continent. While A.W. Lin's offers such pseudo-Chinese dishes as General Tso's Chicken ($13), Crab Rangoon ($6 for the appetizer), Lo Mein ($9) and Moo Goo Gai Pan ($12), it also offers sushi, sashimi and Pad Thai ($11 with chicken, $12 for beef, $13 for shrimp) and Vietnamese Pho ($11.50). It's sort of like the late Sai Gon Cuisine in front of Stein Mart on Cantrell Road — only it emphasized Vietnamese dishes while also offering Thai and Chinese fare.

So it's your basic one-stop Asian food emporium, with a thick menu offering options that should theoretically satisfy everyone from your cousin who spent a year teaching English in Beijing and now orders Biangbiang Noodles off the menu in Mandarin, to your uncle's new girlfriend who won't venture a toe past sweet and sour chicken ($12).

Maybe you've got no use for it, but in our experience, just about everybody needs a reliable, popularly priced place to get Kung Pao Shrimp ($15) in their life, and A.W. Lin's — the downtown version, at least — feels like a reasonable option.

Besides, it's got a good bar.

We say this based on a couple of specialty drinks we ordered, an $8 vodka martini made with Tito's, SoHo Lychee (apparently misidentified as a vodka on the menu — it's actually a mildly sweet cordial), triple sec (!!!) and lychee puree. While that sounds a little dangerous, the bartenders must have gotten the proportions right, because the resulting drink is bracing and refined, with just a hint of aromatic candy.

We won't try it at home, but we'd order it again.

One we will duplicate at home is the Old Fashioned made with Suntory Japanese Whiskey (one of those Scotches you can't call Scotch because Scotch comes from Scotland, silly). It's $9, and is simple; the honey-toned Suntory whiskey opens up the drink in a different way than the Four Roses (or Jim Beam Red Stag) bourbon I typically use. Not in a better way necessarily, but in a very pleasant, somewhat lighter way.

I've made Old Fashioneds with real Scotch (from Scotland) before, but haven't been bowled over by them — there's a peatiness to the Old World products that doesn't marry well with muddled sugar and citrus acid. But the Suntory works really well, and it might even be better if you upgraded to Suntory's Hibiki whiskey.

OK, onto the review. We got takeout for two, had a nice school-night dinner there, and took a friend to lunch. We didn't encounter anything we didn't like, though the Pad Thai was correctly labeled "mild" on the menu.

No. 1 is Hot & Spicy Fish ($15), which is a boiled whitefish filet (we asked what sort of fish it was but could get no better answer than "the best white fish available") with napa (which we used to call "Chinese cabbage" back when we went to the Golden Dragon after the bars closed) in a red chile oil sauce, topped with cilantro.

We can also vouch for the noodle-loaded pho, served by the vat. Like the pad thai, it's only mildly spiced — management might think about adding a hot sauce to the tabletop condiments (regular and low-sodium soys) as a sop to those of us who warped our taste buds with too much Tabasco in our youth — but it's flavorful and we ended up taking about half of it, which I would guess is about a quart, home. (We also took some, but not nearly as much, of the hot fish home.)

We got Beijing Style Duck Lotus Bun (two pieces, $6), which is so visually appealing and flavorful that we are reconsidering our usual "no thanks" attitude toward appetizers, along with two full dinners for two — OK, let's say one and three-quarters full dinners for two — out of our Pad Thai and Mapo Tofu ($10) takeout. (Mapo tofu, by the way, is pretty much a real Chinese dish — simple and tasty soft tofu with sichuan peppers in chile sauce.)

Our lunch, which was leisurely, with about as much attention paid to us by the wait staff as we wanted, consisted of A.W. Lin's Lunch Combo ($12), an excellent sushi special with 12 pieces (more than I needed but not more than I wanted) of Crunchy Shrimp Roll, Spicy Tuna Roll and Philadelphia Roll, and Mongolian Beef ($9) that my dining companion found comparable to Fantastic China's version of the dish. (Which by his lights is high praise.)

All this in a clean, attractive and appropriately dimly lighted downtown storefront space that doesn't seem to revolve around two large TVs (both tuned to sports during our visits) with booths and tables that invite conversation. Thankfully, the room doesn't seem acoustically tuned to amplify whispers into screams. You get a nice ambient burble.

The name was adopted because the owner wanted to avoid confusion with Little Rock's extant Fu Lin's; his restaurants in other markets are called Fu Lin's. So the initials stand for his first name and the chef's first name. No reference to the Crescent City is implied.

So, potential investors, I guess that Cajun-Sichuan fusion joint is still on the table.