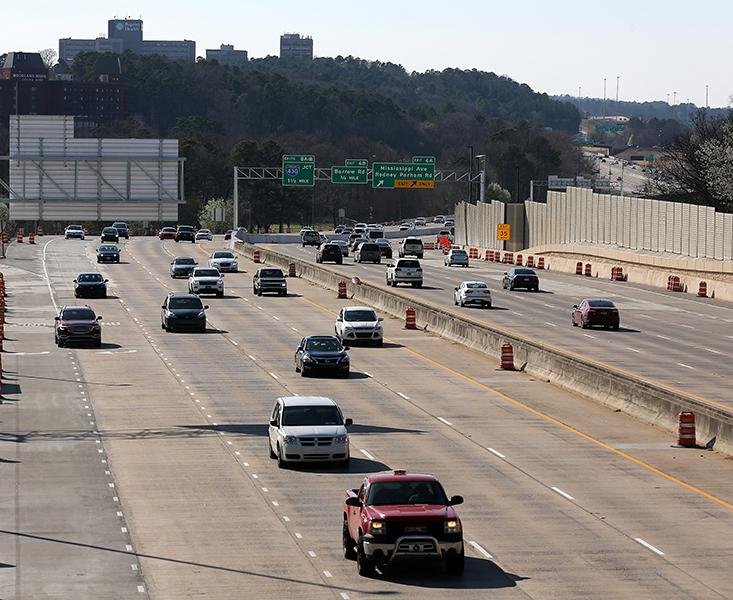 The Interstate 630 widening project in west Little Rock, nearly two years in the making and with an $87.4 million price tag, is all but finished.

All eight lanes are now open and motorists no longer will face lengthy lane closings that in recent months had limited traffic to one lane in each direction for entire weekends.

The Arkansas Department of Transportation said some work remains, including putting down permanent road markings. The latter will require another round of overnight lane closings, but it likely won't take place until April when the ground temperature is warm enough to apply the markings, said Randy Ort, an agency spokesman. Temporary markers are in place.

But for all practical purposes, the corridor is operating as designed as far as drivers are concerned, he said.

That said, until all the work is complete the stretch of highway covered by the project remains a construction zone and is subject to a lower speed limit.

The project began in July 2018 and originally was scheduled to be completed in April. Agency officials expect the prime contractor, Manhattan Road and Bridge of Tulsa, to qualify for almost the maximum amount of incentives for completing the project early, Ort said.

The maximum amount of days available for the incentive is 15 days. For each day, the contractor was eligible for $198,000, which was the assigned daily road-user cost for the project. Manhattan would have been charged that amount for each day over the 590 days the contractor said it needed to complete the project. 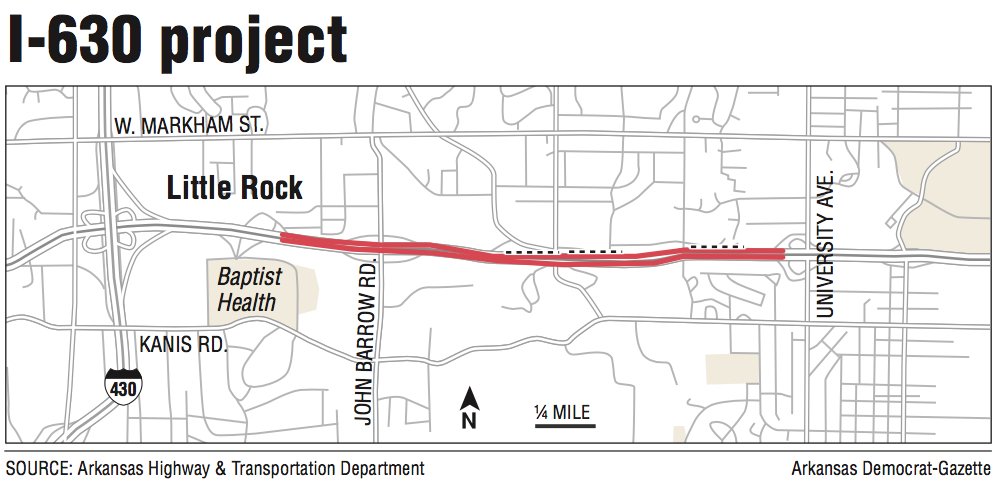 Road-user costs are the impacts of the project on drivers, including the cost of delay, vehicle-operating costs, crash costs and emissions costs as well as noise, business impacts and inconvenience to the local community, according to the Federal Highway Administration.

If it is Tuesday, Manhattan will qualify for incentives totalling $2,784,000.

"There is still some painting and permanent seeding to be completed" before the project is considered "substantially completed," Wylie said in an email.

She said work that will need to be completed after Tuesday include application of the permanent markings, the sidewalk along the South Hughes Street overpass, any work deemed necessary by the agency's bridge inspectors, traffic cameras and message boards.

The project covered a 2.2-mile section east from Interstate 430 to South University Avenue, widening it to eight lanes from six. It included replacing the South Hughes Street overpass and replacing bridges over South Rodney Parham Road and Rock Creek.

It also included the installation of sound barriers for neighborhoods on the north side of the freeway.

While some residents question the aesthetics of the sound barriers, they are working as designed, said Mary-Julia Hill, the president of the Briarwood Area Neighborhood Association.

"The people that are on the [walking] path can carry on a conversation," she said.

Manhattan agreed to fix a curb issue on the Hughes overpass and a drainage issue in the neighborhood.

"If they do that, I'm a happy camper and so is the neighborhood," Hill said.

A lawsuit in federal court challenging the environmental approval of the project was rejected on appeal and is now back in U.S. District Court awaiting a review of the basis that the Federal Highway Administration and state transportation officials used to approve the environmental clearance the project received.