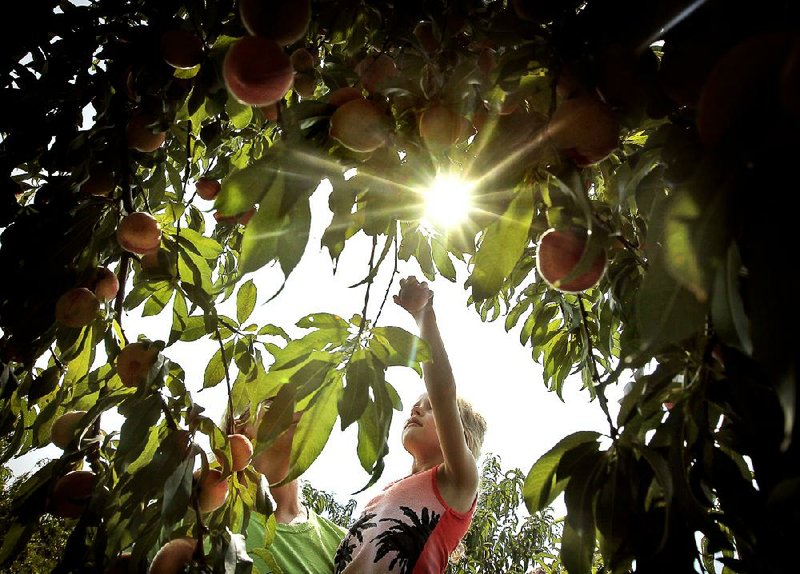 FILE — Aimsley Helms, 6 from Sherwood, reaches into a peach tree at Faulkner Lake Orchard and Produce while picking peaches to make jam with her friends in this 2012 file photo.

A worsening climate in California for vegetable and fruit crops is creating an opportunity for farmers in the Arkansas Delta and the Arkansas River Valley, a conservation group says.

The World Wildlife Fund, which generally isn't known for agriculture research, said in a report released last month that commercial production of fruits and vegetables already being grown in the state could increase dramatically if certain obstacles can be overcome.

California produces more than a third of the vegetables and two-thirds of fruits and nuts grown in the United States, the World Wildlife Fund said. "However, California's warming climate makes farming there less certain in the future, and the state will likely suffer from more chronic weather (e.g. increased droughts) as well as severe weather (e.g. heavy rains, flooding and freezes)," the group's report said.

Wildfires pose a threat to the state's orchards, and lighter snowfalls in the Sierra Nevada mountains mean less irrigation from runoff, the group said.

A University of California study released in 2018 projected that more than half of the Central Valley will no longer be suitable for growing apricots, peaches, plums, walnuts and other crops around the middle of the century.

"While California farmers and ranchers have always been affected by the natural variability of weather from year to year, the increased rate and scale of climate change is beyond the realm of experience for the agricultural community," the California scientists said.

The World Wildlife Fund began "The Next California" project in January 2019 and solicited the help of scientists and researchers at the University of Arkansas and Arkansas State University, experts with Winrock International, among others in Tennessee, Mississippi and Missouri. The group's researchers visited a number of farmers in the state.

While the report also concerned western Tennessee, southeast Missouri and northwest Mississippi -- all part of the Mississippi River delta -- much of its focus was on eastern Arkansas and along the Arkansas River Valley.

A second phase of the project will involve more research on questions raised in the first part of the study, creating "market demand and bringing large-scale buyers on board" and developing a pilot program for specialty-crop growers.

"When this project began, we were concentrating on farmland along the Mississippi River," the World Wildlife Fund said. "However, there is also interest in specialty produce among farmers in Arkansas' River Valley. This region also has fertile areas of land with plenty of water, but it is more mountainous, with a different climate that will allow for a broader range of fruits, vegetables, and nuts to be grown. This will bring diversity to the state industry."

"However, most of these [produce] farms are quite small and sell to very local audiences," according to the World Wildlife Fund report. "A full 66.7% of vegetables and 41.3% of fruits are sold at farmers' markets. ... New, larger markets would need to be developed to engage additional farmers or to incentivize larger farms to move into specialty crop productions."

Arkansas produces about 4,000 acres of sweet potatoes, valued at $20 million; 2,000 acres of tomatoes for a crop value of $10 million, and 1,600 acres of watermelons with a value of $5 million, according to Farm Bureau statistics.

The World Wildlife Fund noted the opening last year of peanut-shelling and drying facilities near Jonesboro and the growth of edamame production in Arkansas as signs of farmers' willingness to move into specialty crops. Production of commercial hemp in Arkansas resumed last year.

"While California will continue to be a key agricultural state, we envision a more distributed food system where areas are able to grow what is best suited to local climates, food is produced closer to consumers with less waste, and economically depressed areas can benefit from higher-value produce," the World Wildlife Fund said.

Julia Kurnik, author of the group's report, said farmers she visited were open to shifting at least some of their row crops to specialty crops, with some caveats. "They recognize the change to grow higher-value crops and the safety provided by more diversity," she wrote. "Many expressed concerns over low prices for commodity row crops and falling demand, especially considering ongoing trade concerns. However, they also advocated a pragmatic approach, and few were eager to be the test case."

Potential obstacles are the need for seed varietals to be developed and tested, higher labor costs because most fruits and vegetables are hand-picked, a shortage in farm labor, and lack of infrastructure in storage, cooling and shipping, she said.

"The commodity row crops that are grown do not spoil easily and can be stored for long periods," she wrote. "They also are frequently shipped via river freight, which is much cheaper than trucking. Specialty produce would need to operate on a faster schedule and in an temperature-controlled environment."

The U.S. Department of Agriculture, she wrote, could boost specialty-crop production by expanding programs now primarily available only to row-crop farmers. Farmers could join in a sort of cooperative to establish washing stations, packing sheds and cold-storage facilities needed for vegetables and fruit, she said.

"[W]hile the farmers I met spoke eloquently on these topics, they also thought that with the right partners and support, these challenges could be overcome," Kurnik wrote in a blog in October. "Most importantly, they were willing to try if others are willing to work with them."

"While specialty produce would be relatively new to the Delta, this is an agricultural region with rich and plentiful soils, abundant water, and transportation to the rest of the country. But it is also rich in people -- both industrious farmers ready to take on new challenges and great local partners," Kurnik wrote.