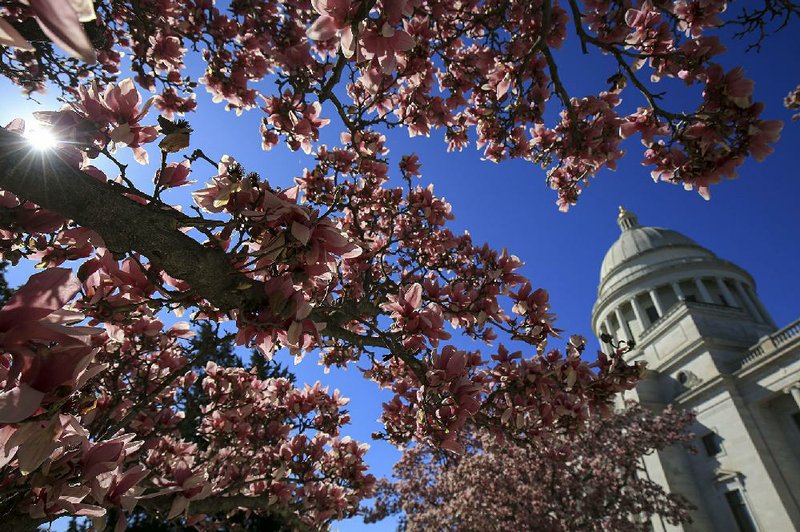 An effort to change the once-a-decade process of drawing Arkansas' legislative and congressional district maps was started Thursday, in hopes that removing elected officials' role in the process will make it less partisan.

Arkansas Voters First, a group formed to lead the redistricting effort, filed a proposed amendment to the Arkansas Constitution, the first step toward qualifying the amendment to go before voters in November.

Currently, the state Legislature handles the drawing of the state's four congressional districts, while a committee consisting of the governor, secretary of state and attorney general draw the districts for the state House and Senate.

The Arkansas Voters First proposed amendment would replace that process with a nine-member commission that would draw congressional and legislative districts.

The proposal instructs that the commissioners draw maps that do not "unduly favor or disfavor any political party," a process known as gerrymandering. The commission also would be required to consider race and language when drawing the districts, and would be instructed to divide as few cities and counties as possible.

The Arkansas Voters First effort is closely tied with the state chapter of the League of Women Voters, whose members make up a majority of the group's board, said Bonnie Miller, a league member and chairwoman of Arkansas Voters First. The national League of Women Voters announced an effort last year to adopt redistricting changes in all 50 states.

"We have been very concerned with partisan gerrymandering, really throughout our existence," Miller said. "We view it as the biggest threat to democracy that we face today."

After the 2010 census round of redistricting -- when Republican-controlled legislatures in states such as North Carolina and Pennsylvania drew maps that skewed toward GOP candidates -- efforts to tackle gerrymandering began to take place through the courts, which struck down maps in those states.

But in cases involving maps drawn by Democrats in Maryland and Republicans in Wisconsin, the U.S. Supreme Court said partisan gerrymandering is not an issue for federal courts to decide and left it up to state courts.

A growing number of states have taken redistricting out of the hands of party politicians by establishing independent commissions to handle the process.

In Arkansas, a change to the process was proposed two years ago by David Couch, the author of the successful 2016 amendment that legalized medical marijuana. While Couch's earlier effort stalled, he said he helped write the amendment put forward by Arkansas Voters First.

As was the case in Couch's 2018 efforts, state Republicans are likely to oppose efforts to make redistricting nonpartisan. That's because they are in power and stand to control the process for the first time in state history.

Democrats, who drew the current maps after the 2010 census, lost control of the state Legislature and the other offices that control redistricting during Republican waves in 2012 and 2014.

"I will be skeptical of the proposal because the system that we have now works well," said Doyle Webb, the chairman of the Republican Party of Arkansas.

At least one Arkansas Republican, however, has been recruited by Arkansas Voters First to support the effort.

State Rep. Dan Douglas, R-Bentonville, a four-term lawmaker who is not running for reelection after he survived a close primary challenge in 2018, said overly partisan districts are leading to more extreme candidates and turning voters toward apathy.

"Yes, Democrats had it and gerrymandered it for so long, [but] why not, instead of letting either party have control of what the districts are, let the citizens decide what their districts are?" Douglas said.

Arkansas Democratic Party Chairman Michael John Gray agreed with Douglas, though he conceded that it would clearly benefit the minority party to pass redistricting changes as Democrats are almost certain to be shut out of the process next year. Gray laid part of the blame for Republican successes on the current Democratic-drawn maps and the political influences that went into those districting decisions.

"It's politicians drawing it," Gray said. "Whether it worked or it didn't work out, the districts are wrong."

The commission proposed by the Arkansas Voters First Amendment would consist of nine members chosen in a multistep process intended to ensure that members represent both major political parties, as well as each congressional district in the state. The proposed amendment also would bar anyone who is a registered lobbyist, elected official or party official -- or anyone with an immediate family member in those positions -- from serving on the commission for a period of five years.

Qualified applicants for the commission would first be narrowed into a pool of 30 applicants by a panel of former judges appointed by the chief justice on the Arkansas Supreme Court. Then, the governor and legislative leaders would be able to veto applicants to reduce the pool to 20. Finally, the panel of judges would randomly draw names from that pool to form the commission.

Attorney General Leslie Rutledge, a Republican who will have a seat in the redistricting under the current law, said the proposed changes will not produce fairer maps.

"This proposal is far from non-partisan because there is an inherent conflict of interest when commissioners are recommended by those legislators who stand to benefit from the drawing of their respective districts," Rutledge said in a statement Thursday.

Rutledge, however, will not play a role in reviewing proposed constitutional amendments as she did in 2018. Under a law passed by the Legislature last year, backers of any proposed amendments can start collecting signatures once they file a draft with the secretary of state. Any legal challenges will automatically be reviewed by the Arkansas Supreme Court.

Miller, the chairwoman of Arkansas Voters First, said the group plans to use paid and volunteer canvassers to solicit petitions. The group filed its formal organization papers with the Ethics Commission on Thursday and does not have to disclose its donors until next month.

The group has until July 3 to gather 89,151 signatures of valid voters in order to qualify for the ballot.

Even then, however, it is likely to face legal challenges. A similar proposal for a nine-member redistricting commission in Oklahoma was struck down last month by the Oklahoma Supreme Court, which said the group supporting the proposal had failed to adequately describe it to voters.