Scientists weigh in on pets, infection after dog case 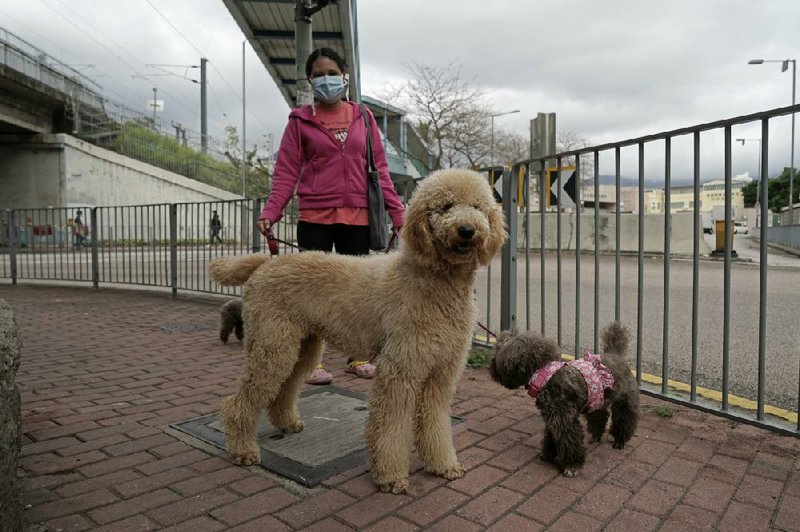 A woman walks her dogs Thursday in Hong Kong. While a dog in Hong Kong has tested weakly positive for the coronavirus, officials say pets do not spread the virus to humans. (AP/Kin Cheung)

HONG KONG -- Pet cats and dogs cannot pass the new coronavirus on to humans, but they can test positive for low levels of the pathogen if they catch it from their owners.

That's the conclusion of Hong Kong's Agriculture, Fisheries and Conservation Department after a dog in quarantine tested weakly positive for the virus Feb. 27, Feb. 28 and March 2, using the canine's nasal and oral cavity samples. The dog is owned by a person who was hospitalized with covid-19, and it has been quarantined since Feb. 26, according to the department.

A unidentified spokesman for the department was quoted in a news release as saying. "There is currently no evidence that pet animals can be a source of infection of covid-19 or that they become sick."

Scientists suspect the virus known as SARS-CoV-2 that causes the disease originated in bats before passing it on to another species, possibly a small wild mammal, that passed it on to humans. However, experts from the School of Public Health of The University of Hong Kong, the College of Veterinary Medicine and Life Sciences of the City University of Hong Kong and the World Organization for Animal Health have unanimously agreed that the dog has a low-level of infection and it is "likely to be a case of human-to-animal transmission."

[Video not showing up above? Click here to watch » https://www.youtube.com/watch?v=FKo0algaw7s]

"At this point, we can say there's evidence dogs can get infected, but we have no idea what that means for dogs or people ... is it one of a million or is it one of 10? We have no idea," said J. Scott Weese, a professor at the University of Guelph's Ontario Veterinary College who studies zoonotic disease. But, he added, "a weak positive would suggest there's not a lot of virus there."

Weese said he is less concerned about the possibility of dogs becoming widely infected with the novel coronavirus than he is about cats, which, along with ferrets, were shown to be susceptible to infection with the SARS -- severe acute respiratory syndrome -- virus in laboratory experiments. A study published in late January in the Journal of Virology, he noted, predicts that the virus that causes covid-19 can attach to receptor cells present in cats, pigs, ferrets and some primates -- meaning those species might be at greater risk of being infected.

"The big question for me is: Is it exclusively a human virus, or is it predominantly a human virus right now?" Weese said. "What we don't want to do is get an animal reservoir," that could spread the virus, he added, such as feral cats. "But that's probably unlikely."

That a dog is infected with the virus is not surprising, said Gregory Gray, an infectious-disease epidemiologist at Duke University. Coronaviruses are "promiscuous" and move between species, he said.

"Certainly, it raises the hypothesis that perhaps dogs could play a role in the ecology of SARS-CoV-2 transmission to man, but you'd be going way out on a limb to assume that right now," said Gray, referring to the virus that causes covid-19 in people. "I don't see any reason to change the social connectivity with our dogs or other dogs or to put any sort of respiratory apparatus on the dogs, like we've seen on the Internet."

Gail Golab, chief veterinary officer with the American Veterinary Medical Association, said in an email that the Hong Kong dog's lack of symptoms could mean it "has a low level of infection, but that replication of the virus in the dog has not been sufficient to cause the dog to become ill." Given that, she said, the association's advice to pet owners remains the same: Focus on hygiene, and if ill, stay home and away from pets -- "including petting, snuggling, being kissed or licked, and sharing food."

Most important for now is that people who are infected with or have been exposed to covid-19 think about their pets, too, Weese said -- both because of the unknowns about their susceptibility to infection, and because a pet can host the virus on its fur or skin, just as cash or a doorknob might.

"If I'm self-isolating at home and living in my basement, away from other people, but my cat comes to sit on my lap, and I cough on it and pet it, and it runs upstairs and rubs against my kid and goes outside, then we've maybe got a little bit of a problem," Weese said. "Consider your cat just like your kid."

Information for this article was contributed by The Associated Press; and by Karin Brulliard of The Washington Post.