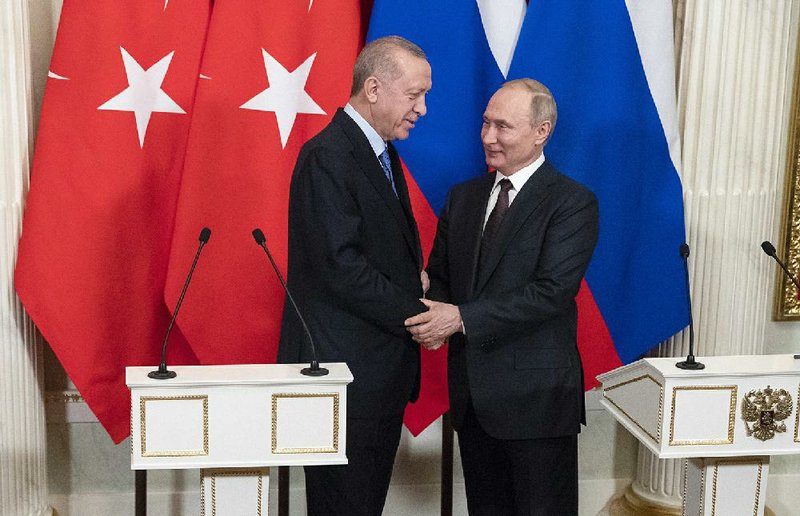 Turkish President President Recep Tayyip Erdogan (left) and Russian President Vladimir Putin hold a news conference Thursday in Moscow after agreeing to a cease-fire in northwest Syria, where dozens of Turkish troops have been killed in clashes with Russia-backed Syrian government troops and more than 1 million civilians have been displaced. Turkey also sent forces to its border with Greece to stop Greek authorities from blocking asylum-seekers from entering from Turkey. (AP/Pavel Golovkin)

MOSCOW -- The presidents of Russia and Turkey said they reached agreement on a cease-fire to begin at midnight Thursday in northwestern Syria, where escalating fighting had threatened to put forces from the two countries into direct conflict.

The deal struck by Russian President Vladimir Putin and Turkish President Recep Tayyip Erdogan also would set up a security corridor along a key east-west highway in Idlib province.

Putin voiced hope the agreement will serve as a "good basis for ending the fighting in the Idlib de-escalation zone, put an end to suffering of civilian population and contain a growing humanitarian crisis."

The agreement appears to achieve Russia's key goal of allowing the Syrian government to secure control over strategic highways essential for consolidating its grip on the country after a devastating nine-year war.

[Video not showing up above? Click here to watch » https://www.youtube.com/watch?v=PKgQ50Cc24A]

But in a nod to Turkey's interests, the deal also puts the brakes on Syrian President Bashar Assad's push to reclaim control over all of Idlib province, the last opposition-controlled region that borders Turkey.

Erdogan said he and Putin agreed to help refugees return to their homes. More than 900,000 people have been displaced by the fighting since Assad's forces began an offensive in December backed by Russian airstrikes.

Both leaders had underlined the need for an agreement at the start of the Kremlin talks, which lasted more than six hours.

U.N. Secretary-General Antonio Guterres "takes note" of the cease-fire agreement and hopes it will lead "to an immediate and lasting cessation of hostilities that ensures the protection of civilians in northwest Syria, who have already endured enormous suffering," U.N. spokesman Stephane Dujarric said.

Until the latest crisis, Putin and Erdogan had managed to coordinate their interests in Syria even though Moscow backed Assad while Ankara supported the government's foes. Both Russia and Turkey wanted to avoid a showdown but the sharply conflicting interests in Idlib province made it difficult to negotiate a mutually acceptable compromise.

The Syrian offensive in Idlib has resulted in Turkey sending in thousands of troops to repel the Syrian army. Clashes on the ground and in the air have left dozens dead on both sides.

The fighting also has pushed nearly 1 million Syrian civilians toward Turkey, which already hosts more than 3.5 million Syrian refugees. Erdogan responded by opening Turkey's gateway to Europe in an apparent bid to persuade the West to offer more support to Ankara.

Putin discussed the situation in Idlib with European Council head Charles Michel, who met with Erdogan in Ankara on Wednesday. The Kremlin said Michel informed Putin about the EU's efforts to block the flow of migrants.

Putin offered Erdogan his condolences over Turkish military losses but noted that Syrian troops also suffered heavy casualties. Turkey's Defense Ministry announced that two more of its soldiers were killed Thursday, raising the number slain in Syria since the start of February to 60.

"The world's eyes are on us," Erdogan had said.

Opposition activists in Idlib blamed Russia for Thursday's strike on a rebel-held village that they said killed at least 15 people, including children, and wounded several others. The Russian military had no immediate comment, but it has denied similar claims by insisting it hasn't targeted residential areas.

The Russian and Turkish foreign ministers said Thursday's agreement involves a cease-fire to be enforced starting at midnight along existing battle lines. The deal also envisages setting up a 7-mile security corridor along the M4 highway to be jointly patrolled by Russian and Turkish troops, starting March 15.

Meanwhile, Turkey's purchase of an advanced Russian missile system won't block the U.S. from helping its NATO ally in its fight against Russian-backed Syrian forces, the American envoy for Syria said Thursday.

"There is no unanimity in D.C. on what to do and how fast to do," James Jeffrey told a conference in Istanbul on the conflict in Idlib, the last Syrian rebel stronghold.

Ankara's purchase of the Russian S-400 missile-defense system is "a serious concern for the U.S. Congress and for our defense establishment and Trump," he added. "We're looking at ways to work around that."

Turkey has asked Washington to deploy a pair of U.S.-operated Patriot missile-defense batteries on the Syrian border to deter Russian and Syrian airstrikes on Idlib.

Erdogan confirmed on Wednesday that he had requested ammunition from President Donald Trump.

Washington has threatened Turkey with sanctions over the purchase of the S-400 missiles, and has warned it against operating them if it wants to buy Patriot batteries and return to the joint production of the F-35 stealth warplane.

Information for this article was contributed by Vladimir Isachenkov and Suzan Fraser of The Associated Press; and by Onur Ant and Selcan Hacaoglu of Bloomberg News. 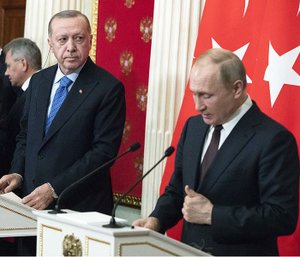