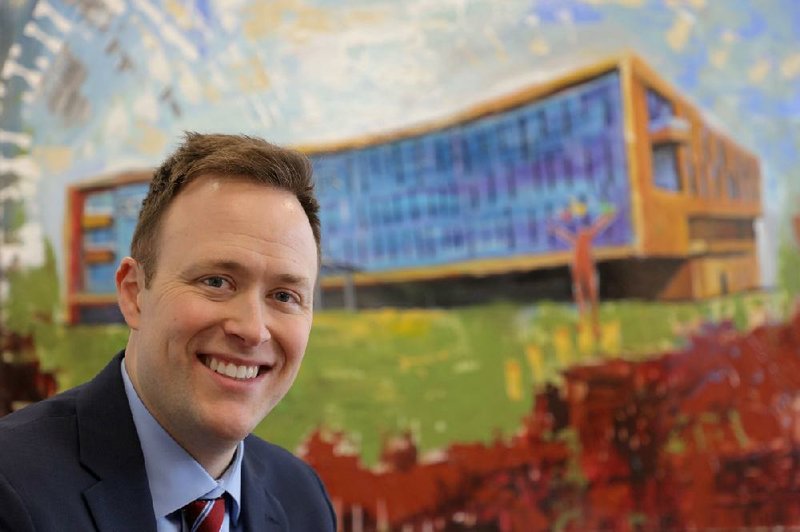 “We want to transform the way cancer care is delivered. We want to deliver care in a world-class fashion. We have physicians and team members I would put against anybody in the nation.” (Arkansas Democrat-Gazette/John Sykes Jr.)

Taking the fight to the often deadly disease is the mission of CARTI, the largest private care cancer clinic in Arkansas. Currently CARTI employs 33 doctors, more than 600 staff members and has 16 separate locations around the state dedicated to the cause. Among CARTI's numerous services to patients are cancer survivor retreats, counseling and even massage therapy. 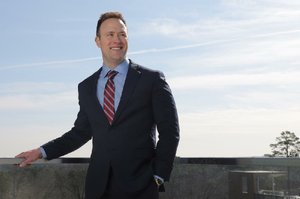 “Getting up early and training puts me in a better place. Accomplishing something like that early is crucial. Working out physically helps everything fire mentally.” (Arkansas Democrat-Gazette/John Sykes Jr.)

Adam Head has had slightly more than two years as president and chief executive officer of CARTI. Those two years have made quite an impression on those who depend on CARTI and those who keep CARTI going. He is seen as the kind of fighter that the cancer center needs.

"There are a lot of qualities that make [Adam] a great president and CEO," says Albert Braunfisch, a six-year CARTI board member and chairman of the board for the past two years. "He is a servant leader, a great listener and a team builder. His military background probably played a role. But he hit the ground running and put together a great team in no time at all."

Head, 39, is fairly young for someone with his title and responsibilities.

"We did a national search," Braunfisch says. "We weren't just looking in our own backyard. I will say there were other candidates who were older and had more experience dealing with cancer. His age didn't give us any concern. He had a track record at the Heart Hospital. It was clear he had the skills."

By all accounts, Head has set a new tone for CARTI and straightened the financial course of the organization. The result is a brighter future for CARTI.

"We want to transform the way cancer care is delivered," Head says. "We want to deliver care in a world-class fashion. We have physicians and team members I would put against anybody in the nation. We have had patients that have traveled out of state for cancer care and they were referred back to us."

Head calls himself a "late bloomer and pretty shy."

He spent his early childhood in North Little Rock. His father started out in the car business and later moved into insurance. His mother was a nurse when she wasn't a full-time, stay-at-home mom. He is the oldest of four children in his family.

For Head, those early days growing up were dominated by getting outside and riding around his neighborhood.

"I feel like I was always on a bicycle back then," Head says. "I was always riding around to different homes of friends and playing baseball or basketball or soccer. I wasn't the first one picked for the teams. I can tell you that."

Head has only good memories of his family life in those days.

"We always vacationed at the beach in the Gulf Coast in Florida," Head recalls. "We would camp. My dad would take me fishing. We went to Arkansas Traveler games. If you were to go back in the newspaper files, you would find a photo of me when the San Diego Chicken was in town. He has his beak on my head. I couldn't have asked for a better childhood. I had a loving mom and dad who were very encouraging to me."

For high school Head traveled across the river to attend Walnut Valley Christian Academy, a new school in west Little Rock. Head says his family "burned up the interstate" getting him back and forth from classes to home.

Head felt comfortable at Walnut Valley despite it being small and new.

"We had fun," says Head of his high school days. "We pulled pranks. It might have been us who put some urinal fresheners in the principal's office. We might have moved a teacher's car sideways in the parking lot."

Head is happy to note that he met and eventually married his "high school sweetheart."

"It was a pretty small school and she was walking down the one hallway," Head recalls. "At first she thought I was silly. Our first date was a double date and we went to Chili's. I spilled ice cream and chocolate all over myself on another date."

Courtney and Adam have four young kids -- the oldest is 13.

"I was attracted to her because she has a very kind spirit toward other people," Head says. "She has a lot of empathy. She is sweet and encouraging. Let's say it was not a hard decision."

Head didn't feel pressure from his parents to do any one specific thing after high school.

"They recognized that everybody is wired differently," Head says. "They always encouraged us to find out our path. I wanted to go to school and we reasoned through that together. What do I want to do? We looked at the pros and cons."

After thinking about it, Head decided he "wanted to do something adventurous." His best friend had an uncle in the FBI. Head looked to get in the world of criminal justice but planned to sign up for the ROTC in college.

"I found I got an Army/ROTC scholarship right before I started at the University of Arkansas in 1999," Head says.

Head's family didn't have extensive experience serving in the military. There was one connection to service in the armed forces that Head could look to as an example.

"My grandfather served in World War II in the same division I ended up in," Head says. "I would mow [my grandparents] yard in summers while going through ROTC and we'd sit on the driveway and he'd tell me things about WWII -- maybe some things he hadn't shared [with anyone else]."

The University of Arkansas proved to be the right choice for Head.

"I did like college. I still had fun but it was different fun."

By the time he was a sophomore, Head was realizing that the criminal justice track wasn't the best fit.

"I started getting interested in health care," Head recalls. "I worked as an orderly at Washington Regional Medical Center. You see the different ways you could serve and lead in the hospital. I could see how I could use the skills I was picking up to run a medical organization. I talked to my mom about it a lot. She thought that could be a good path."

Head shifted from criminal justice to a business management degree. His scholarship required him to spend four years in the military after graduating. This commitment took on a more serious tone after Sept. 11, 2001.

"I lived in a dorm four years," Head recalls. "I walked in the first floor of Yoakam and they had a big TV there. I saw the second plane going into the tower. Pretty soon they were canceling classes and the teachers just left."

In the frantic days that followed, the purpose of the attack became clear and the United States identified the enemy responsible. Then came the war with Iraq.

"I knew the game had changed for me," Head says. "This thing I had stepped into was now different. It was a faith test. It was scary to be honest."

Head was out of college and newly married when he had to report to Fort Benning, Ga., in 2004. He served as a captain in the Army Medical Service Corps at Martin Army Hospital.

By June 2005, the young captain was deployed to Iraq.

"The first half of my time in Iraq was in Bakuba, east side of Baghdad," Head says. "We were able to do a lot of things working with the Iraqi army. Our goal was to help them and to train their soldiers on life-saving techniques. We were the first units to hand off to them. It was exciting."

Orders to move to a different side of Baghdad brought Head up close to the hellish side of U.S. mission in Iraq.

"We got moved to ... the west side of Baghdad," Head says. "There we were just trying to keep everybody alive. We called it an outpost. There were no toilets. We ran on generator power. It was tough to get resources we needed. We were taking care of a lot of our own soldiers, civilians and the Iraq army soldiers. It was an aid station and we would be called to take care of mass casualty events. If a roadside bomb went off, we could be overrun."

After getting out of the military in summer 2008, Head eventually took on the job of assistant administrator at Little Rock's Heart Hospital. The move meant a return to his hometown and offered him valuable experience in the varied aspect of hospital administration.

"You get exposed to a little bit of everything," Head says. "It is a learning role. You manage a few departments, help out with strategic planning and marketing. You get a lot of exposure to a lot of parts in hospital. That really helps you see the whole picture."

Coming in as a leader of CARTI was attractive to Head because the situation was not an optimal one.

"It was in a challenging state," says Head of CARTI in August 2017 when he was named president and CEO. "I've always been drawn to situations that require transformative leadership."

"When [Head] came here 2 1/2 years ago, we had posted financial losses for four years in a row," says Balan Nair, medical oncologist and chief medical director at CARTI. "When he came, we were not quite halfway through the fiscal year. By the end of the year, we posted positive net revenue. We have posted positive revenue since then. There were silos in our organization that had been built up over the years and he helped break them down. He hired smart people to help him with management."

For Head, almost everything he does is in some way feeding into his leading CARTI. In his off time, he reads books about leaders and leadership.

Staying in top physical condition -- a holdover from his time in the Army -- through what he calls "rigorous training" is key for Head. So his early mornings are dedicated to weight training and other conditioning.

"Getting up early and training puts me in a better place," Head says. "Accomplishing something like that early is crucial. Working out physically helps everything fire mentally."

It looks like CARTI found the fighter it needed.