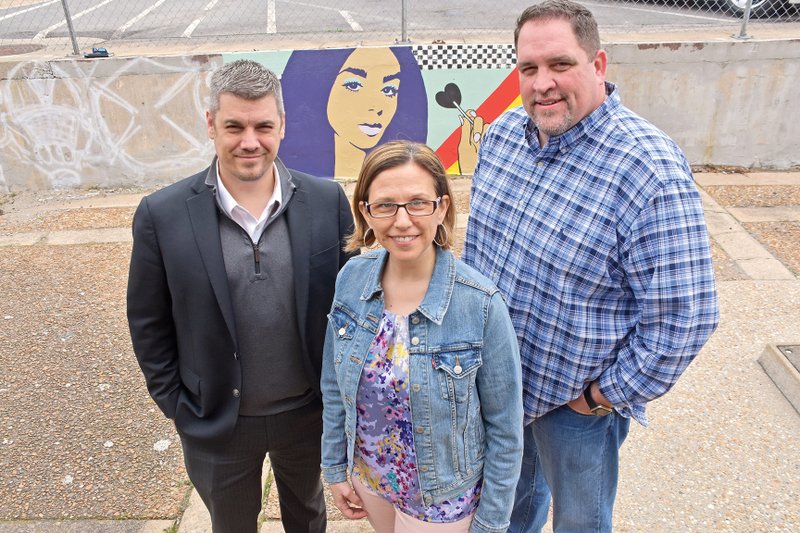 Cabot Mayor Ken Kincade, from left, stands with Cabot Foundation for the Arts and Culture vice president Becky Williams and foundation president John Rudd in front of the paint-a-wall mural behind the Cabot Police Department. The foundation is working with the city to install three murals by the end of the year.

CABOT — In November, the Cabot Foundation for the Arts and Culture started a paint-a-wall project behind the Cabot Police Department.

“It is a short wall, about 3 or 4 feet high, and we divided the wall into 23 sections, and each artist is assigned one of the sections,” said Becky Williams, foundation vice president. “We divided the sections, giving one half to local high school students and the other half to the local artists.

“It should be done by April.”

The paint-a-wall project inspired the foundation to tackle and invest in bigger local pieces and to, hopefully, invite the rest of the state to the city of Cabot. Williams said the Advertising and Promotion Commission for the city gave funding to the foundation in order to paint three murals this year.

“We are really excited to show what Cabot can do,” foundation president John Rudd said. “We are inviting the rest of Arkansas to come into our community and experience what family is like in Cabot.

“We’ve got a lot to offer between our sports programs and the Parks and Recreation Department. There are a lot of people out there who don’t know Cabot, and we are hoping this will get them here.”

“We are going to be asking residents what murals they would like to see and discuss how the artists should be chosen,” Williams said. “With every project that we do, we want to start with the citizens.”

“There has been a real push for bringing back the heart of downtowns,” Williams said, “especially in rural communities that have kind of gotten out of downtown. We are trying to build the pride of community, and art does that like nothing else.

“We don’t have to agree on politics or religion to appreciate a piece of art because it appeals to a wide audience. It is easy to love art.”

Williams and Rudd have attended the Uncommon Communities program at the Winthrop Rockefeller Institute, and Williams said the focus was community and economic development.

“Murals are huge right now. People will travel to see them, take photos in front of them and showcase them,” Williams said. “It builds a sense of pride that we already have in our community.

“We want these murals to invite people to see what Cabot has to offer.”

She said the foundation has talked to representatives from a couple of other cities, and they have said that murals are bringing in tourists and new people and getting the local community out as well.

Williams said one of the things she would like is to have the mural artists involve students at the schools, who would actually help with the painting on certain days.

“They may not be able to help with the finer details, but they could help with big swatches of color,” she said. “We want it to be a community art piece. We want that buy-in from the community from the very beginning.”

She said the cost of each mural will vary, depending on the artist. She said foundation members will have concepts in mind and will show the concept to different artists and start a bidding process.

“Basically, we will explain that this is our budget, and this is our wall, and do the bidding process that way, then ask for submissions,” Williams said. “Other communities have had different options and ideas on how to do the murals.

She said the cost depends on the wall and how big the mural will be, as well as the artist. Williams

said there are a lot of factors that go into the cost of murals.

She said each mural will most likely cost less than $10,000. She said the A&P Commission gave the foundation $30,000. The murals should be completed by the end of the year.

Williams said they have not narrowed down the sites for the three murals. She said there are a few walls that have potential, and the foundation has permission to put murals on them.

“We don’t have specific ones. That is something we will decide on in the coming months,” Williams said. “We hope this is just the beginning of the murals.”