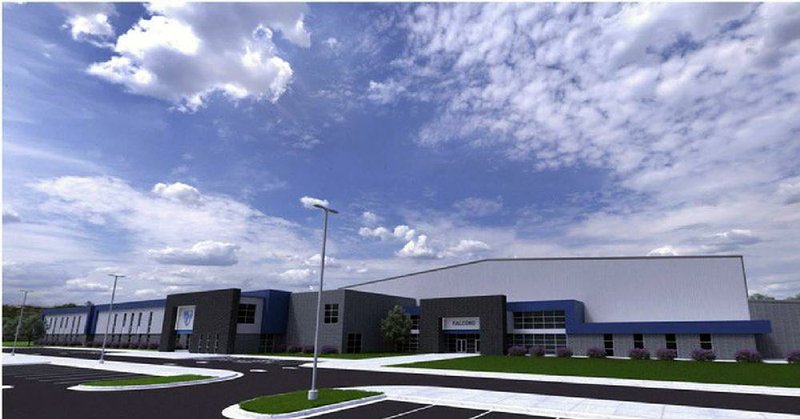 Leaders of Academics Plus Charter Schools Inc., the state's oldest charter system, plan to break ground in June on a two-story, $20 million high school building on nearly 40 acres on White Oak Crossing. The site is next door to the Maumelle baseball fields on a flat stretch between Interstate 40 and the city.

Rob McGill, chief executive officer/president of Academic Plus, last week presented the construction plans at two events for the school system that in January received a 10-year renewal of its state charter, along with authorization to build the school in the Maumelle area and expand the system's enrollment cap.

"Ten years, 700 more students at Maumelle and the new building -- that's what we are celebrating," McGill said. "Those are very big things that come from the renewal from the state for the citizens of Maumelle and our students," he told about 75 people at a cookies-and-punch event at the current high school campus.

The anticipated high school is the latest in a string of buildings constructed by both traditional public systems and open-enrollment charter schools, which are publicly funded but operate independent of traditional systems.

In fewer than 10 years, the North Little Rock School District replaced or greatly expanded each of its campuses.

LISA Academy charter system has repurposed and put up new buildings, including a new middle and high school at its North campus. EStem Public Charter Schools has created new elementary, middle and high schools out of old facilities. Even the Maumelle Elementary and existing Maumelle High School buildings have yet to reach a 10-year anniversary.

The new Maumelle-area high school building is to open to students in August 2021, said Kyron Jones, chief operating officer for Academics Plus. It will result in the grade reconfiguration at the existing Maumelle Charter Elementary and Maumelle Charter High School, both on Edgewood Drive in the heart of Maumelle. Both schools have A grades from the state, based largely on ACT Aspire exam results in grades three through 10.

The elementary building will become home to kindergarten through third grades. The current high school will be a middle school for grades four through seven, and the new high school -- which is actually in the North Little Rock city limits and not Maumelle -- will house up to 700 pupils in grades eight through 12.

The new high school was designed by Lewis Architects Engineers to have 39 classrooms, including choir and band rooms and three computer labs as well as laboratories for chemistry, physical science and the environmental and spatial technology course.

The multiwindowed, high-ceiling cafeteria will seat at least 325 in each of two lunch periods. The gymnasium -- home of the Falcons -- will have seats for 1,545. Other features will include dressing rooms, a spacious weight room, and a concession stand that can serve the gymnasium crowd as well as those outdoors for soccer and track events.

For the first time, an Academics Plus campus will have an auditorium, McGill said, a 782-seat space.

"It's not a Cadillac but its not a Pinto either," McGill said of the features of the auditorium that he called a middle-of-the-road Chevrolet.

Like the existing high school, the new campus won't have a traditional stand-alone library, McGill said. The school has a waiver from state requirements for traditionally structured libraries, gifted education and alternative education programs. In regard to libraries, Maumelle Charter High School students and faculty members rely instead on classroom books and electronic resources.

The school will use its annual state foundation aid -- which is $6,899 per student this year -- to make the debt payments.

The Academics Plus system overall has the potential to grow to 2,975 when the new 2,000-student cap in the Maumelle area is paired with the 975-student cap at the system's Scott Charter School in the Scott community in eastern Pulaski County.

Scott Charter School has a current kindergarten-to-ninth-grade enrollment of 247. The school is to expand a grade a year until it serves kindergarten through 12th grades. Tied to its enrollment growth are plans for two new classroom building and a gymnasium. A 300-seat gym was recently completed at the Scott campus.

That school's facility plan calls for a new elementary building for 550 pupils once the enrollment there reaches 400, and another new classroom building when the count is 800. At 900 students, a 1,000-seat gym will be added to the 21-acre Scott property, McGill said.

The state Board of Education initially authorized Academics Plus in 2001 and just recently renewed the charter until 2030. 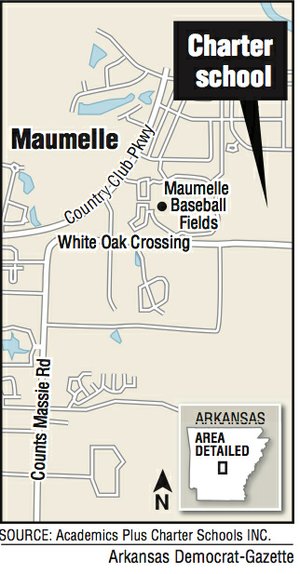 A map showing the location of a charter school near Maumelle.