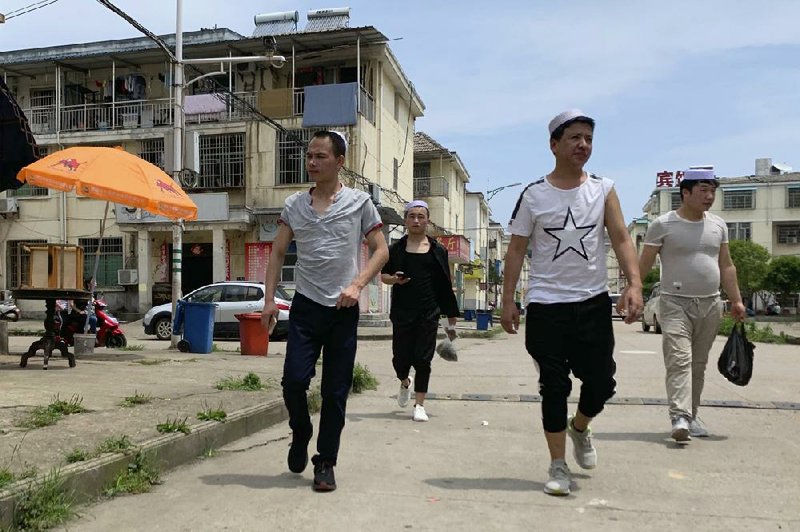 Residents of the Hui Muslim ethnic minority walk in a neighborhood near an OFILM factory in Nanchang in eastern China’s Jiangxi province in June. (AP/Ng Han Guan)

NANCHANG, China -- In a lively Muslim quarter of Nanchang city, a sprawling Chinese factory turns out computer screens, cameras and fingerprint scanners for a supplier to international tech giants such as Apple and Lenovo. Throughout the neighborhood, women in headscarves stroll through the streets, and Arabic signs advertise halal supermarkets and noodle shops.

Yet the mostly Muslim ethnic Uighurs who labor in the factory are isolated within a walled compound that is fortified with security cameras and guards at the entrance. Their forays out are limited to rare chaperoned trips, they are not allowed to worship or cover their heads, and they must attend special classes in the evenings, according to former and current workers and shopkeepers in the area.

The connection between OFILM, the supplier that owns the Nanchang factory, and the tech giants is the latest sign that companies outside China are benefiting from coercive labor practices imposed on the Uighurs, a Turkic ethnic group, and other members of minority groups.

Over the past four years, the Chinese government has detained more than a million people from the far west Xinjiang region, most of them Uighurs, in internment camps and prisons where they go through forced ideological and behavioral reeducation. China has long suspected the Uighurs of harboring separatist tendencies because of their distinct culture, language and religion.

When detainees "graduate" from the camps, documents show, many are sent to work in factories. A dozen Uighurs and Kazakhs told the AP they knew people who were sent by the state to work in factories in China's east, known as inner China -- some from the camps, some plucked from their families, some from vocational schools. Most were sent by force, although in a few cases it wasn't clear if they consented.

Workers are often enrolled in classes where state-sponsored teachers give lessons in Mandarin, China's dominant language, or politics and "ethnic unity." Conditions in the jobs vary in terms of pay and restrictions.

At the OFILM factory, Uighurs are paid the same as other workers but otherwise treated differently, according to residents of the neighborhood. They are not allowed to leave or pray -- unlike the Hui Muslim migrants also working there, who are considered less of a threat by the Chinese government.

"If you're Uighur, you're only allowed outside twice a month," a small-business owner who spoke with the workers confirmed. The AP is not disclosing the names of those interviewed near the factory out of concern for possible retribution. "The government chose them to come to OFILM, they didn't choose it."

The Chinese government says the labor program is a way to train Uighurs and other minorities and give them jobs. The Chinese Ministry of Foreign Affairs last week called concern over possible coerced labor under the program "groundless" and "slander."

However, experts say that like the internment camps, the program is part of a broader assault on the Uighur culture, breaking up social and family links by sending people far from their homes to be assimilated into the dominant Han Chinese culture.

"They think these people are poorly educated, isolated, backwards, can't speak Mandarin," said James Leibold, a scholar of Chinese ethnic policy at La Trobe University in Melbourne. "So what do you do? You 'educate' them, you find ways to transform them in your own image. Bringing them into the Han Chinese heartland is a way to turbocharge this transformation."

OFILM's website indicates that the Xinjiang workers make screens, camera cover lenses and fingerprint scanners. It touts customers including Apple, Samsung, Lenovo, Dell, HP, LG and Huawei, although the AP had no way to track specific products to specific companies.

Apple's most recent list of suppliers includes three OFILM factories in Nanchang. It's unclear whether the specific OFILM factory the AP visited twice in Nanchang supplies Apple, but it has the same address as one listed. Another OFILM factory is about half a mile away on a different street. Apple did not answer repeated requests for clarification on which factory it uses.

In an email, Apple said its code of conduct requires suppliers to "provide channels that encourage employees to voice concerns." It said it interviews the employees of suppliers during annual assessments in their local language without their managers present, and had done 44,000 interviews in 2018.

Lenovo confirmed that it sources screens, cameras, and fingerprint scanners from OFILM but said it was not aware of the allegations and would investigate. Lenovo also pointed to a 2018 audit by the Reliable Business Alliance in which OFILM scored very well.

All the companies that responded said they required suppliers to follow strict labor standards. LG and Dell said they had "no evidence" of forced labor in their supply chains but would investigate, as did Huawei. HP did not respond.

OFILM also lists as customers dozens of companies within China, as well as international companies it calls "partners" without specifying what product it offers. And it supplies PAR Technology, an American sales systems vendor to which it most recently shipped 48 cartons of touch screens in February, according to U.S. customs data obtained through ImportGenius and Panjiva, which track shipping data.

PAR Technology in turn says it supplies terminals to major chains such as McDonald's, Taco Bell, and Subway. However, the AP was unable to confirm that products from OFILM end up with the fast food companies.

McDonald's said it has asked PAR Technology to discontinue purchases from OFILM while it launches an immediate investigation. PAR Technology also said it would investigate immediately. Subway and Taco Bell did not respond.

OFILM confirmed it received AP requests for comment but did not reply. Its website says the company "answered the government's call" and went to Xinjiang to recruit minorities, as part of an effort to pull them from poverty and help them "study and improve." It recruited more than 3,000 young men and women from Xinjiang starting in 2017.

A report Sunday from the Australian Strategic Policy Institute, researched separately from the AP, estimated that more than 80,000 Uighurs were transferred from Xinjiang to factories across China between 2017 and 2019. The report said it found "conditions that strongly suggest forced labor" consistent with International Labor Organization definitions.

The AP also reported a year ago that Uighur forced labor was being used within Xinjiang to make sportswear that ended up in the U.S.

-- Information for this article was contributed by Erika Kinetz of the Associated Press.