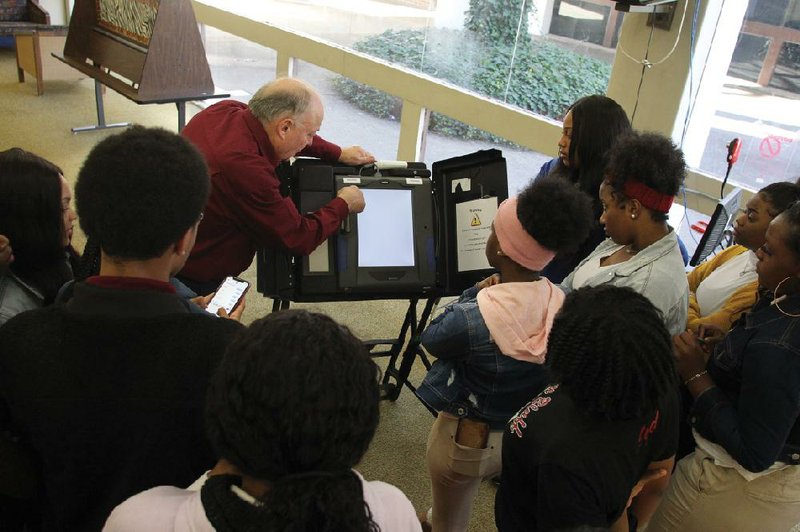 PINE BLUFF -- Jefferson County election officials, with the March 3 primary behind them, are looking toward what lies ahead as they continue struggling with old touchscreen voting machines that have become balky and prone to failure.

Last week, on Super Tuesday, those shortcomings became apparent as technicians struggled to power the machines up and as poll workers struggled to keep them operating. According to Election Commissioner Stuart "Stu" Soffer, a number of poll judges said they won't be back until the machines are replaced.

The total cost of the 140 machines Soffer said the county needs, according to an estimate supplied by the Jefferson County Election Commission, is nearly $940,000.

According to a formula worked out by the secretary of state's office, to purchase the machines, the state would put in $618,434 from federal grant funds, leaving Jefferson County to come up with the remaining $321,367 -- money that both Soffer and County Judge Gerald Robinson have said the county does not have.

Last week, the commissioners approved a letter to be sent to seven senators and state representatives whose districts include all or part of Jefferson County, asking for assistance in convincing Gov. Asa Hutchinson and Secretary of State John Thurston that the county's fiscal woes justify asking the state to fully fund new voting equipment.

"There is precedent and several of the counties receiving 100 percent state funded new voting equipment were in significantly sounder fiscal condition than Jefferson County," the letter said.

Kevin Niehaus, public relations director for the Arkansas secretary of state's office, said that two counties, Scott and Van Buren, received 100% reimbursement for the cost of voting equipment, but only after those counties reduced their needs to the amount originally budgeted by the state.

"This is since we got the new $8.2 million from the Legislature," he said. "We don't know what the previous administration did."

Niehaus said the secretary of state's office plans to visit the nine counties that still need new equipment in the next few weeks to see what can be done.

"The goal is to get new equipment to those counties in time for the November election," he said.

In a recap of Election Day, the commission reported 20 instances of equipment failure that delayed opening some polling locations. Worn connections between the Real Time Audit Log printer and the iVotronic touch screen voting machine on some units created issues in powering the machines up and four units had to be replaced altogether.

The Real Time Audit Log attaches to the iVotronic voting machine and records in real time every vote that is cast to that machine.

Sven Hipp, administrator for the election commission, said the problems encountered had to do with the age of the voting machines and corrosion issues.

"It had a lot to do with worn out, loose connections on top," he said. "It was a poor design to start with, too. Where on a normal printer you have two screws to secure the connection, these just plug in and over time they've gotten worn and the connections are no longer secure."

As a fail-safe feature, Hipp said, when the connection is lost between the Real Time Audit Log printer and the voting machine, the machine will not allow any more votes to be cast until the connection is restored.

"It will not let you vote, it will not let you do anything else until that printer is fixed," he said. "The only thing a failed printer does is prolong the voting period. It doesn't cause any votes to be lost."

Another issue arose when data anomalies were detected in some of the Personal Electronic Ballot units that are used to load the proper ballots onto the machines and to then retrieve the data upon closing of the machine.

At one polling site, Mount Harmony Baptist Church in Pine Bluff, Hipp said both voting machines at that location froze up and would not load ballots from the Personal Electronic Ballot units, which led to a halt in voting until the problem could be addressed.

"I had to go down there and get them jumped off," Hipp said. "One lady had already left after she got aggravated for having to wait."

But the big problems came at the end of the night, Hipp said, when seven polling sites had problems closing out the machines, which led to delays in getting the votes to the Election Commission office and left several poll workers frustrated and angry, with some even threatening to not come back until the county has reliable machines for people to vote on.

"I know of three right offhand who said they really don't want to mess with them anymore," he said, saying that he understands their frustration.

"When I teach them to do it right and they follow proper procedure and do what they're told to do and then it doesn't go right, it's just so aggravating," Hipp said. "They should have been out of there in 20 minutes but three hours later they're still trying to get the machines to work and we're on their time. They don't get paid any extra for getting out there three hours later because the machine won't work right."

The last polling site to close down and deliver the ballots to the Election Commission office was at the Sahara Shrine Temple at 820 S. Main St. in Pine Bluff, less than eight blocks away. Those ballots were delivered three hours after the 7:30 closing of the polls.

"The company, [Election Systems & Software], the advice they were giving wasn't working," Hipp said. "The problem is that the people who designed these machines 20 years ago are retiring so they've got newer guys who know all of the statewide new equipment but they just know what they've heard in the little bit of time they've had with the old iVotronics."

When he arrived at the polling site, Hipp said, he realized the error on the machine was one he had witnessed 10 years earlier when he was being trained on the equipment, and he was able to force close the machine manually on a different Personal Electronic Ballot unit, save the data onto a flash drive, and close the machine.

"I knew how to fix it but I couldn't walk anybody through it over the phone," he said. "The way [Election Systems & Software] was advising us, it would have taken over two hours to close the machine, but I realized when I got there that I had seen this happen before and we were able to close the poll."

Robinson said the problems encountered on Election Day made it clear that the county needs the new equipment, but even so, the cost is still beyond the reach of the county budget.

"At this particular time, we don't have it," Robinson said, "but as things get better I do believe we'll be able to put something on it."

The county judge said that if the state won't consider paying the full cost, he will ask the secretary of state's office if something can be worked out for the county to pay a lesser share or possibly to pay out the full amount over time as revenue comes in. He said even though the county's ability to afford the new equipment may be in doubt, the need for the new equipment is not.

"I do agree with Mr. Soffer on the fact that we need those new voting machines," he said. "So we're going to do everything we can to have as much as possible so that we can get those new machines. And I'm not even beyond asking for help from outside entities. One thing about me, I'm not afraid to ask."