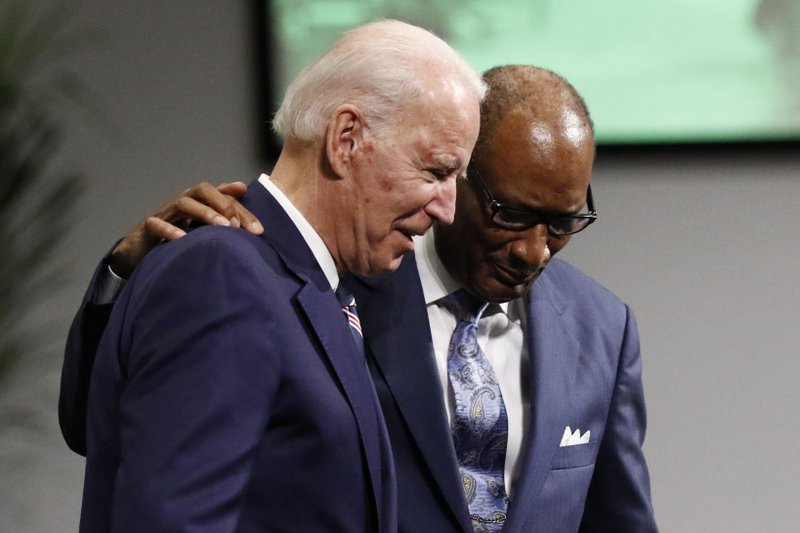 Rival Bernie Sanders was campaigning about 900 miles to the north in Michigan, the biggest prize among the six states voting Tuesday. The senator from Vermont was looking to bolster his appeal with black voters by announcing the endorsement of the Rev. Jesse Jackson, a civil-rights activist.

Biden was welcomed at New Hope Baptist Church in Jackson, where he was accompanied by NAACP President Derrick Johnson and by U.S. Rep. Bennie Thompson, both of whom are from Mississippi. They sat in the front row, and Biden sang along with the congregation: "Oh, victory in Jesus, my savior forever."

Thompson endorsed the former vice president on Thursday and introduced him to the congregation Sunday. "We know what it means to be picked out, to be picked on," Thompson said. "We know Joe. I'm going to give him another name."

[Video not showing up above? Click here to watch » https://www.youtube.com/watch?v=zI42QYaLPuk]

He called Biden "the comeback kid."

Biden had struggled in the early voting states of Iowa, New Hampshire and Nevada, where Sanders emerged as the front-runner. But Biden won decisively in South Carolina on Feb. 29, boosted by black voters. He also had a strong showing on Super Tuesday in states with large numbers of black voters.

He mentioned former President Barack Obama several times. Biden said the United States is at "an inflection point" because of poor treatment in the past three years of people who are marginalized, isolated and oppressed.

Obama's name also came up at a Sanders rally Sunday in the Michigan city of Grand Rapids -- but under different circumstances. The senator and Jackson appeared together in front of thousands of cheering supporters at a downtown plaza, and Sanders said Jackson "has broken down more barriers than others can even dream of" while blazing a path against racism that helped propel Obama to the White House.

"If there was no Jesse Jackson, in my view, there never would have been a President Barack Obama," Sanders said.

"Let me just say to Rev. Jackson: It's one of the honors of my life to be supported by a man who has put his life on the line for the last 50 years fighting for justice," he added.

Jackson and Obama's relationship has not been without its past issues, including in 2008 when Jackson apologized for saying Obama had been "talking down to black people."

Addressing attendees at the Michigan rally, Jackson stayed focused on Sanders, saying, "I stand with Bernie Sanders today because he stood with me," adding that the senator "never lost taste for justice for people."

Sanders beat Hillary Clinton in Michigan's Democratic primary in 2016, and he noted that Jackson won the state during his own bid in the 1988 presidential primary.

"Tuesday, there is going to be a very, very important primary here in Michigan," Sanders said. "Back in 1988, Jesse Jackson won the state. In 2016, I won the state. And, on Tuesday, if we stick together, we bring our friends out to vote, we're going to win it again."

In Mississippi, Biden also talked about the 2017 white supremacist rally in Charlottesville, Va. "I underestimated that hate's never defeated. It only hides," Biden said.

Daisy Carter, 75, attended the church service where Biden spoke, and she said afterward that she is enthusiastically supporting him and will ask others to vote for him, too.

"He was Obama's right hand, and Obama was our man," said Carter, who is black and is retired as a Head Start purchasing agent. She said it is important to defeat President Donald Trump, adding she thinks Biden can do that.

Actress Vivica A. Fox and former Massachusetts Gov. Deval Patrick spoke to a racially diverse crowd Sunday at a get-out-the-vote rally for Biden at historically black Tougaloo College in Jackson. "Joe had President Obama's back for every minute of those eight years in office," said Fox, who also campaigned for Biden in South Carolina before that state's primary.

As Jackson was endorsing Sanders, Biden picked up the endorsement of Sen. Kamala Harris of California, who said she would "do everything in my power" to help elect the former vice president. She is the latest dropout from the Democratic presidential race to line up behind Biden in his matchup against Sanders.

The decision by Harris, who was one of three black candidates seeking to challenge Trump, further solidifies the Democratic establishment's move to close circles around Biden after his Super Tuesday success.

Despite that, Jackson said he chose Sanders after the campaign offered responses on 13 issues Jackson raised, including protecting voting rights, increasing funding for historically black colleges and universities, and committing to putting blacks on the Supreme Court, according to a statement released by the Sanders campaign. Jackson also said Biden's campaign hadn't approached him about an endorsement but that Sanders' did.

Speaking at the Michigan rally, Jackson brushed aside some voters' uneasiness about Sanders' avowed democratic socialist ideology, saying Sanders will defend democratic values and that issues important to the poor and to members of minority groups wouldn't have been prioritized in the presidential race without him.

As the coronavirus hits more states, Sanders said Sunday that his campaign is gauging whether it may become necessary to cancel the large rallies held by his campaign.

"Obviously what is most important to us is to protect the health of the American people," Sanders said as he appeared in a series of TV interviews. "And what I will tell you, we are talking to public health officials all over this country."

"This is an issue that every organization, every candidate has got to deal with," he said.

Federal health authorities have been advising older people and those with medical conditions, in particular, to avoid crowded spaces, prompting the cancellation of music and arts festivals and other events around the country. On Sunday, Surgeon General Jerome Adams noted that the average age of death for people from the coronavirus is 80, while for those needing medical attention, it is 60.

But that so far hasn't led Trump or the two major Democratic rivals to cut back on big campaign events. Each man is in his 70s.

Sanders said that "in the best of all possible worlds," the three candidates should probably limit their travel and avoid crowds, "but right now, we're running as hard as we can." Sanders planned a meeting today in Detroit with public health experts and others to discuss the outbreak.

Mercedes Lopez, 56, who owns a restaurant in Grand Rapids and attended an open-air Sanders rally in the city's downtown area on Sunday, said she's not afraid of the virus. She said she sees the government's increased concern as a plot to distract the electorate from other, negative things that are occurring, such as increasing petty crime and official corruption.

"There's a virus, but it's not at the level they are saying. It's to distract people," Lopez said.

Lopez added that she wasn't worried about attending an event with such a large group, saying: "I'm calm. I'm not going to worry about it because the more you think about -- 'I'm going to protect myself against this one thing or this other thing' -- it becomes impossible. You can't protect yourself from everything."

Trump on Saturday said he wasn't worried about the coronavirus getting closer to the White House after the first case in the nation's capital was confirmed over the weekend. Officials also said an attendee of a recent political conference -- where Trump had spoken -- also tested positive for the virus.

As the battle for the Democratic presidential nomination has played out over the past several weeks, Trump has typically held a rally on the eve of each primary or caucus. But as of Sunday, no plans for a rally tonight had been announced by the campaign. The president's most recent rally took place last Monday in North Carolina.

Erin Perrine, a Trump campaign spokeswoman, said in a statement that the campaign is "proceeding normally" and will announce further events at a later date.

"We will announce rallies when we are ready to do so," Perrine said. She noted that last week, Trump held a town hall-style event and a fundraiser, "and we have loads of campaign events on the event schedule on the website."

Adams, acknowledging Trump's busy public schedule, said that for many Americans, "life can't stop" and that ultimately the goal was to minimize risk as much as possible.

Sanders appeared on CNN's State of the Union, NBC's Meet the Press, and ABC's This Week, and Adams spoke on CNN and on CBS' Face the Nation.

Information for this article was contributed by Emily Wagster Pettus, Will Weissert, Hope Yen and Zeke Miller of The Associated Press; and by Felicia Sonmez, Paige Winfield Cunningham, Juliet Eilperin, Seung Min Kim and Derek Hawkins of The Washington Post. 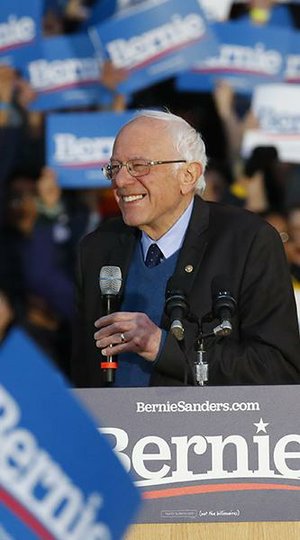