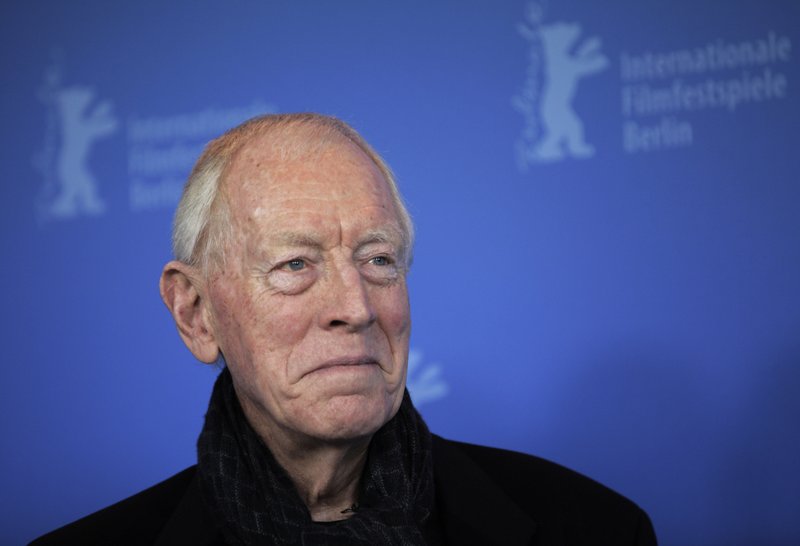 In this Feb. 10, 2012 file photo, actor Max von Sydow poses at the photo call for the film Extremely Loud and Incredibly Close during the 62 edition of International Film Festival Berlinale, in Berlin.. (AP Photo/Gero Breloer, File)

COPENHAGEN, Denmark -- Max von Sydow, the self-described "shy boy"-turned-actor known to art house audiences through his work with Swedish director Ingmar Bergman and later to moviegoers everywhere when he played the priest in the horror classic The Exorcist, has died. He was 90.

His agent Jean Diamond said Monday that the actor, who was born in Sweden but became a French citizen in 2002, had died Sunday in France.

From his 1949 screen debut in the Swedish film Only a Mother, von Sydow starred in close to 200 film and TV productions, remaining active well into his 80s.

He received two Academy Award nominations -- for best actor in 1988 for his gripping portrayal of an impoverished farmer in Pelle the Conqueror, and best supporting actor in 2012 for his role as a mute in Extremely Loud & Incredibly Close. More recently, he received an Emmy nomination for his work as the Three-Eyed Raven in HBO's Game of Thrones.

[Video not showing up above? Click here to watch » https://www.youtube.com/watch?v=22XD-LsJpLc]

The Swede was a mainstay of nearly a dozen classic, angst-ridden films by Bergman, including Wild Strawberries, Shame and the 1957 release The Seventh Seal, in which he featured in one of Bergman's most memorable scenes, as the medieval knight who plays a game of chess against the grim reaper.

Von Sydow made his Hollywood debut as Jesus in the 1965 film The Greatest Story Ever Told, but gained widespread international fame as the devil-evicting priest in William Friedkin's controversial 1973 film The Exorcist.

Tall and lanky, with sullen blue eyes, a narrow face, pale complexion and a deep and accented speaking voice, von Sydow was often typecast in Hollywood as the sophisticated villain.

In 1980, von Sydow starred as the evil emperor Ming the Merciless in Flash Gordon. He turned down the role as the sinister Dr. No in the first James Bond film with the same name, but later appeared as the cat-stroking villain Ernst Blofeld in the 1983 Never Say Never Again, starring Sean Connery as Bond.

While his characters were often sinister, tormented or evil, the soft-spoken von Sydow said he became an actor to overcome his own shyness.

"I think that for many years I used my profession as some kind of a mental therapy," he said in one interview.

Von Sydow was born April 10, 1929, into a family of academics in the southern Swedish city of Lund. He was baptized Carl Adolf von Sydow, but later changed his first name to Max, saying his given name was "not a good name" after World War II.

He studied at the Royal Dramatic Theater in Stockholm and acted in small municipality theaters in Sweden for eight years -- an experience he later described as crucial for his career.

Von Sydow married Swedish actress Christina Olin in 1951 and had two sons, Clas and Henrik. The couple later divorced and he married French filmmaker Catherine Brelet in 1997, with whom he had two more sons, Yvan and Cedric.