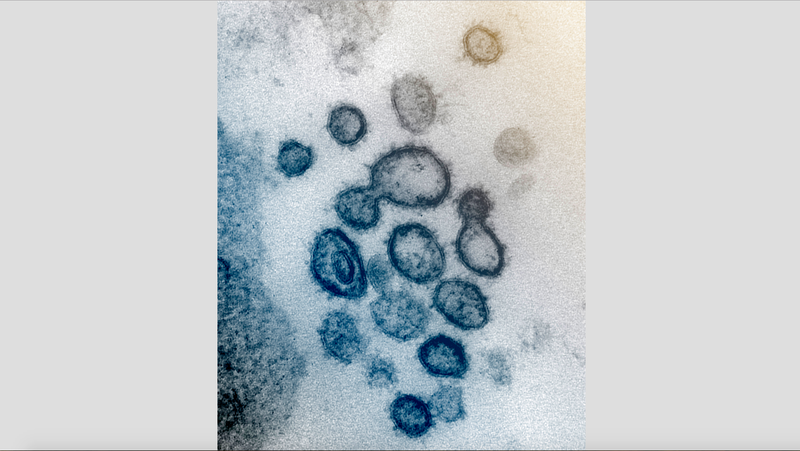 This undated electron microscope image made available by the U.S. National Institutes of Health in February 2020 shows the Novel Coronavirus SARS-CoV-2. Also known as 2019-nCoV, the virus causes covid-19. ( NIAID-RML via AP )

This list features event and school cancellations in Arkansas related to the coronavirus. All public schools were closed beginning Tuesday, March 17, and lasting through April 17.

RESTAURANT CHANGES: See a list of restaurants making changes to their operations due to coronavirus

Arkansas Climate Accord: Personal Stories, Community Solutions: Postponed from May 2 to Oct. 2

Arkansas Enterprises for the Developmentally Disabled’s Curtain Call for a Cause fundraiser, May 28-29; postponed to a single night, June 25

Arkansas Homeless Coalition: April 8 meeting in Little Rock is canceled. Next meeting is scheduled tentatively for May 13.

Arkansas School for Mathematics, Sciences, and the Arts: Remote instruction will begin March 17 through at least March 29. The ASMSA campus will remain open through this period under otherwise normal operations.

Arkansas State Parks: All programs canceled through May 13

Arkansas State University: May 16 commencement postponed until August. Classes online from March 17 until the end of the spring semester. ASU’s residence halls, cafeteria and library will remain open.

Arkansas State University-Three Rivers: online or distance learning exclusively for now, laboratory coursework will be handled on a case-by-case basis

Ballet Arkansas is canceling the remainder of its season and postponing its Master/Works showcase to a date within its 2020-21 season. The company has been offering online programming, including a series called “Encore,” screening Ballet Arkansas performances for free on weekends, and a new series of online dance classes.

Center at Bishop Park in Bryant: Closed through March 30

Central Arkansas Library System: All programs and events suspended effective immediately through May 9. All locations closed until at least April 20.

Clayton House in Fort Smith: Closed to public until March 31. All special events will be postponed.

Crowns: The Gospel Musical at the Weekend Theater in Little Rock: March 20-22, 27-29 and April 2-5; all performances canceled

DecARcerate: Inside Out poetry reading on March 31 is canceled

Delta Symphony Orchestra, May 3 concert in in Jonesboro, canceled

Evolve Gala for the Centers for Youth and Families: March 14, Statehouse Convention Center

Faulkner County: All county offices closed to the public

Fayetteville Public Library: Closing from noon on March 16 through March 29

Fort Smith Museum of History: Closed to public effective March 16 and suspending public and group tours, programs, events, public meeting room use, and outreach through the end of March.

Go Red for Women luncheon for the American Heart Association of Arkansas: March 17, Benton, rescheduled for May 28

Hendrix College: Classes suspended after March 13; remote instruction begins March 30 and continues for the rest of the semester

Hot Springs Animal Services lobby closed to customers until further notice. Individuals interested in adopting or looking for lost pets can view the animals from the outside kennels or look on the Animal Services Facebook page

Hot Springs National Park: Gulpha Gorge campground, including the restrooms and picnic area, will be restricted as of April 2. Those currently registered to camp in Gulpha Gorge will be asked to leave their campsites by April 3. Visitors center and administrative offices remain temporarily closed.

Jonesboro: Parks are closed except for trail use until further notice

Jonesboro: Senior centers and community centers are closed for at least a week

Little Rock: Will reschedule events with planned attendance of 50 or more, a change from the previous plan of 100 or more.

Little Rock Zoo: Closed to visitors March 16-30. The Wild Wines fundraiser has been moved from April 24-25 to September 25-26. Volunteer meetings and training have been postponed until March 30.

Montgomery County Courthouse, Mt. Ida: County offices in the building are closed to the public until further notice

Murry’s Dinner Playhouse, rescheduling March 19-21 Travis Ledoyt concerts; reducing seating to 200 to comply with city recommendations on cancellations of groups over 200; delaying the opening one week to March 31 of Perfect Wedding; and plating meals instead of putting food out on the buffet.

Museum of Discovery, closed March 15 until at least 9 a.m. March 23

National Park College: online-only instruction began March, scheduled through at least April 5, while some technical or hands-on learning may be postponed until after April 5; physical campus closed and employees will work remotely at least until April 5

Momentary, The, Bentonville, closure extended through at least April 17

Old State House Museum, all events canceled through May 13

Philander Smith College: Spring 2020 commencement, originally set for May 2, has been postponed until the fall

Potluck & Poison Ivy: “An Evening with KaToya Fleming,” March 26 at the Joint in North Little Rock

Pulaski County Quorum Court meeting scheduled for March 24 will take place as scheduled but will be limited to Quorum Court members, the County Judge, and some essential staff. The public will still not be permitted access to the building. The meeting will be livestreamed as usual.

Sherwood city playgrounds and outdoor basketball courts are closed until further notice; all indoor facilities are closed to the public under a March 19 mayoral directive. Trails and open spaces remain open.

Southern Arkansas University, Magnolia: Students who do not visit areas of outbreak during spring break will return to classes March 30. Any faculty, staff or student who travels internationally, via public transportation, or to or through domestic areas of significant outbreak will be required to remain off campus until April 13.

Southern Arkansas University Tech, Camden: Spring break will be extended through March 27, except for aviation maintenance and cosmetology programs; students will return to classes March 30; students who left town to go home will have to undergo a health screening before returning

Twice as Fine Texarkana Wine Festival: May 2, postponed to Oct. 10

University of Arkansas at Monticello: Classes move online through the spring semester

University of Arkansas Community College at Hope-Texarkana: extended spring break through March 27, except for courses that were already online-only

Walton Arts Center: All performances and events suspended through May 9

Wildwood Park for the Arts grounds will remain open.The park is rescheduling performances of Godspell, March 27-April 5, to 7:30 p.m. May 29-30 and 3 p.m. May 31. Indoor activities and programs in the Cabe Festival Theatre are postponed until further notice