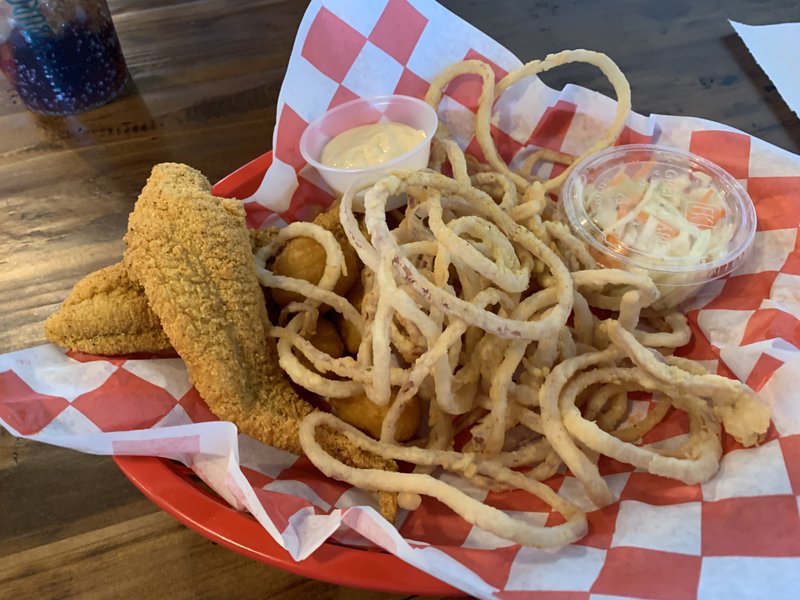 The building with the red-and-white-checkerboard roof has housed many restaurants over the years, including, most recently, the relatively short-lived resurrection of Casey's Bar-B-Q.

The one that was, and probably still is, the most popular at 7410 Cantrell Road in Little Rock: Arkansas Burger Co., gone these many years.

So that might help explain why its ground-beef-centered successor, Hubcap Burger Co., has been packed at peak periods and pretty darn busy at off-peak periods since it opened last month.

The eatery is basically a slightly stripped-down version of Cotham's in the City, at Third and Victory streets downtown and the survivor of the legendary Cotham's Mercantile in Scott, which burned down in May 2017. That's not at all a surprise, considering that the owner is Erin Griffin, who co-owns Cotham's in the City with her husband, Jon Griffin.

The pièce d'résistance/cause célèbre at both Cotham's locations has been the so-called Hubcap Cheeseburger ($12.99), a pound of beef, more or less, forming a patty at least 6 inches in diameter that more than overflows the normal-size bun it comes on, along with plenty of melted cheese, lettuce, tomato, onions and mayonnaise.

We tried it at Cotham's in the City a couple of years back and decided not to repeat the experience here — it was too big to simply lift off the plate and eat as a sandwich, so we cut it into quarters and ended up taking nearly half of it home.

But we did compromise and ordered the "regular" Cheeseburger ($9.99), somewhere between ⅓ and ½ pound, which was plenty large enough. Hubcap Burger allows customers the choice of American, Cheddar or pepper jack cheese​ — we chose Cheddar — and dresses the burger with leaf lettuce, tomato, pickles and red onion — and Hubcap Sauce, a sort of orange-pink, slightly smoky cross between mayonnaise and aioli.

We eschewed all the vegetables and got the Hubcap Sauce on the side, wisely, as it turns out, as our yankee-cultivated palate still considers mayonnaise on red meat heresy. The well-cooked burger needed something as it was basically unseasoned. So we tried adding a little and wish we hadn't. Salt and pepper are on the table; so is a plastic squeeze bottle of ketchup, which is what we ultimately went with. Mass dispensers of yellow mustard and mayonnaise are on the sideboard where you can pick up napkins and plastic tableware.

The surprise on our plate was the accompanying salt-and-pepper seasoned fries, sliced thin and "flat" and considerably crispy.

Where we scored at Hubcap was with the catfish platter ($10.99 with slaw and fries). The two pieces of catfish were nicely crispy and well drained and were dwarfed by the huge pile of onion rings (a $1.99 upgrade) that came in the red-and-white-checked paper-lined red plastic basket.

The o-rings, as they're called on the menu, were another pleasant surprise — very thin onion slices in a light, light-tan batter that we initially thought were underfried, but which, like shoestring potatoes, turned out to be crispier and tastier that way than we expected. The vinegar slaw pleased even our notably slaw-averse diner.

Chicken tenders and grilled chicken are also available as platters or on a bun — standard gluten-bearing or, for $2 more, a gluten/egg free one from Dempsey Bakery.

The staff couldn't be friendlier. Order at the front counter and get a number; food runners bring your food to your table — there's seating for about 60 at black-lacquered tables and, along the western wall, booths. The walls in the dining room are exposed dark-red brick and decorated with actual hubcaps (so you have an actual standard of comparison vis a vis the size of your hubcap burger).

A single table sits on a back patio. Aside from the plastic baskets, just about everything is disposable, though the soft-drink cups are composed of a dense plastic that suggests you could take them home and reuse them; the paper straws are barber-poled red-and-white. Griffin has applied for a native beer and malt beverages permit with plans to serve local brews.