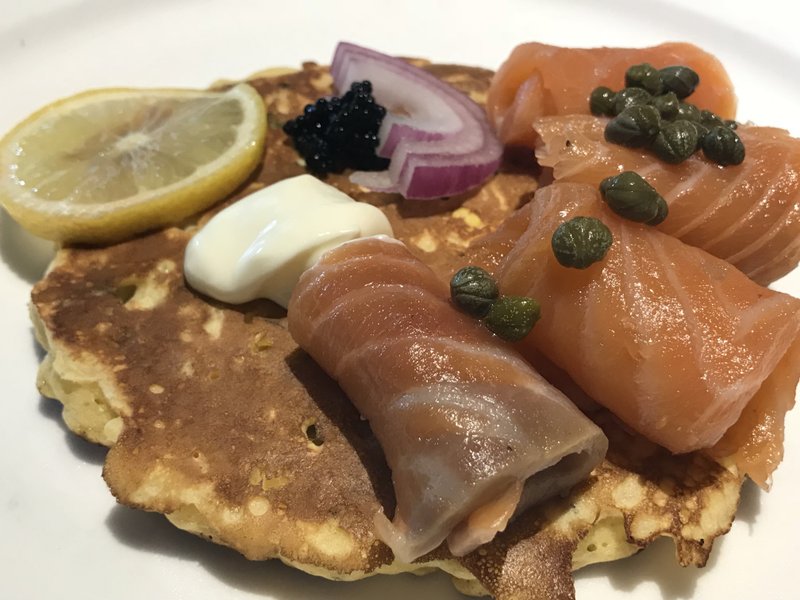 Chef-restaurateur Ira Mittelman is returning to downtown Little Rock with a new restaurant, to be called Savor, at 215 Center St., the original location of Three Fold Noodles & Dumpling Co. and where, since the end of May, Three Fold owner Lisa Zhang has operated what she called a "pop-up" restaurant called Haybird Chicken.

Mittelman estimates it'll take him somewhere between 45 days and two months to open; interior remodeling includes building a bar, installing a new floor, putting in new tables and chairs and painting, but almost all the kitchen equipment is already in place. He is transferring an existing wine and beer license to the new space while applying for a full liquor permit. And he'll be using the enclosed space just to the left of the front door as a 35-seat private dining room, where he'll be able, among other things, to hold small wine tastings.

The motto for the new restaurant, he says, will be "taste and enjoy." The menu will consist, as it has in Mittelman's previous area eponymous restaurant ventures — the short-lived Ira's on Main Street and Ira's Park Hill Grill in North Little Rock — of "all my creations," with an emphasis on "my take on Southern dishes" (expect, for example, a catfish Reuben for lunch), plus "some real interesting vegetarian dishes" along with his usual lineup of steaks, appetizers and salads. He once again pledges to use as many local ingredients as possible.

Tentative hours are 11 a.m.-2 p.m. for Monday-Friday lunch, 5 p.m. to whenever he closes for Monday-Saturday dinner, with occasional Sunday openings when there's something big happening downtown. Happy hour will start at 3.

Mittelman has been surprised and pleased by the backing he has gotten from the locals even in his professional doldrums (Ira's lasted four months and was replaced in a sort of "coup d'hote" over a weekend by Allsopp & Chapple Restaurant + Bar). "When I was down and out, people in this town supported me and I feel fortunate, lucky and blessed," he says. "We're [putting together] what we hope is a tremendous restaurant that builds on what we've done before."

According to its Facebook page (facebook.com/TheMightyCrabNorthLittleRock), The Mighty Crab opened — or at least soft-opened — Monday in Lakewood Village, 2703 Lakewood Village Drive, North Little Rock. The soft opening includes a "raffle giveaway" — tickets are $25, for an unspecified grand prize to "be announced during our Grand Opening ribbon ceremony in about 2 weeks!" It's the third restaurant in a budding mini-chain with locations in Monroe, La., and Jackson, Miss. The menu, also available on the Facebook page, is similar to that of area restaurants Juicy Seafood and Lulu's Seafood Kitchen (formerly Lulu's Crab Boil) — shrimp, crab legs, crawfish, etc., boiled with potatoes and corn on the cob, as well as fried options. A mixed-drink license is pending. Hours are 11 a.m.-10 p.m. Sunday-Thursday, 11 a.m.-11 p.m. Friday-Saturday. We were unable to get through on the listed phone number, (501) 827-8018.

The Senor Tequila at 1117 Oak St., Conway, has closed — Sunday was its last day. A post on the Facebook page (tinyurl.com/vnz26ew) thanked customers for five years of business but explained that "we will not be renewing our lease" and will be "relocating to the Benton/Bryant area," though it does not specify just where. We couldn't get anybody to answer the phone at (501) 358-6382. 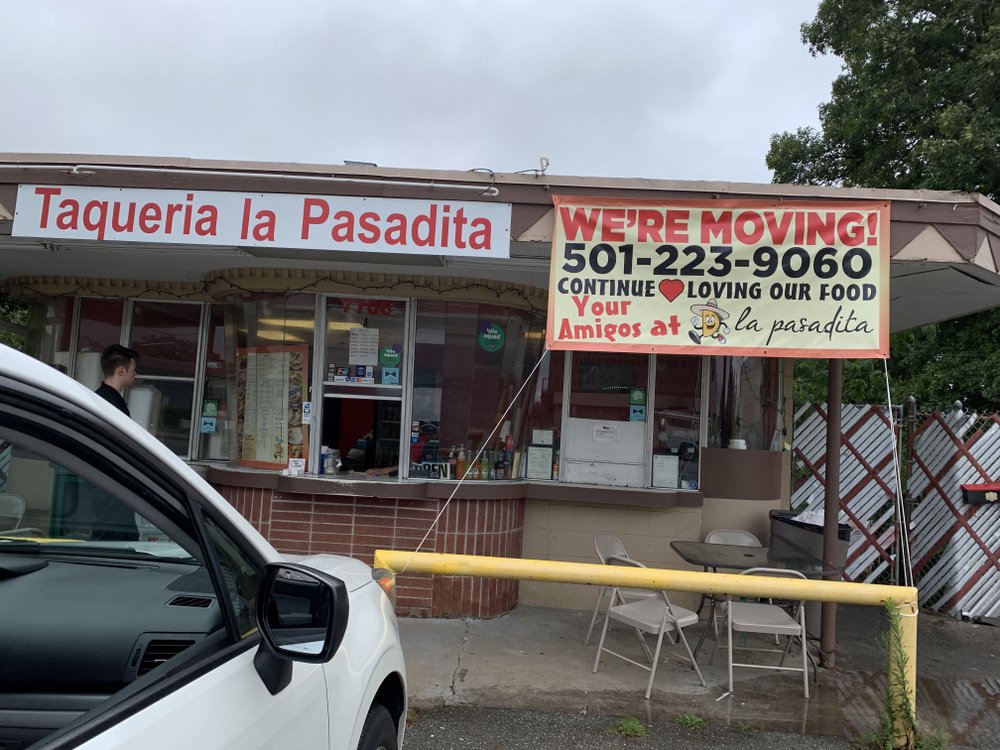 Speaking of Mexican restaurants, Taqueria La Pasadita has a new sit-down restaurant pending — in the Market Place Shopping Center, 11121 N Rodney Parham Road, Little Rock, Suite 34B, which most recently housed the Happy Egg and before that B-Side and Lily's Dim Sum Then Some. You will recall the taqueria had been the final occupant of The Hop shack at 7706 Cantrell Road, Little Rock, and following its eviction (the building has been removed and there's no sign of there ever having been one there), moved into a food truck that operated at 201 Keightly Drive in Little Rock. A post on the Facebook page (facebook.com/lapasadita201) says a timeline for opening could come this week and promises an expanded menu. The phone number is (501) 223-9060.

And an update on our report last week on the new home for Black Angus Restaurant, returning to the corner of West Markham and Van Buren streets where Little Rock's Midtown meets Hillcrest: A March 4 post from owner Karla Creasey on the Facebook page (facebook.com/blackanguslittlerock) reports that the restaurant will close down its current location at 10907 N. Rodney Parham Road on March 24, "giving ourselves a week to exit." The original vacate-date on the building was March 31. The restaurant and its drive-thru operate 10:30 a.m.-9 p.m. Monday-Saturday. The phone number is (501) 228-7800; the website is blackanguscafe.com.

Wear a toga Tuesday to Little Greek Fresh Grill, in the Pleasant Ridge Town Center, 11525 Cantrell Road, Little Rock, and get a free gyro pita — "no purchase is required" — as the chain-franchise outlet celebrates Little Greek Week next Monday-Saturday. If you do buy a $6.99 gyro chicken, falafel or veggie pitas next week, you'll get a free Pepsi fountain drink. The phone number is (501) 223-5300.

A new restaurant called Craw Billy's is set to soft-open Friday at what the Searcy County Arkansas Chamber of Commerce says on its Facebook page (tinyurl.com/wygl82e) is "at the turnoff to Gilbert" — best as we can determine, that address is 12599 U.S. 65 North, St. Joe (in Searcy County) — with a "grand opening and ribbon cutting on April 1!" Ken Perea, co-owner with his wife, Sonya, says he'll boil 500-600 pounds of crawfish this weekend and next, and expects to have his full menu — including seafood and chicken andouille gumbos, blackened catfish and red snapper, peel-your-own shrimp, po'boys (including gator), jambalayas, muffulettas, crawfish pies and red beans and rice ("Our recipe's got brisket and andouille sausage in it," Perea notes) — in place by April 1. It's set up primarily as a take-out business, but Perea says there will be some outdoor areas for eating. Perea also rents cabins and operates an antique shop on the property. Initial hours will be 11 a.m.-9 p.m. Thursday-Sunday, with a possible expansion to more days if business picks up or after cabin-rental season starts. Right now the business phone number is Perea's: (479) 903-2238.

And while we're in the neighborhood, did you know that Searcy County is the "Chocolate Roll Capital of the World?" Well, it is. And Marshall High School, 1004 Zack Road, Marshall, is hosting the ninth annual MHS Chocolate Roll Contest and Festival on March 21, with the title of "Best Chocolate Roll Baker" up for grabs. For $5 you can join the cadre for judging, from 10 a.m.-1 p.m.; there will also be a 5K, an antique car show and classes on how to make chocolate rolls. Visit facebook.com/mhschocolaterolls.

And Burg der Gustropub, billed as "the very first German restaurant in Northwest Arkansas," is coming spring 2020 to the inside of the Bentonville Brewing Co., 1700 S. First St., Rogers. Rob Nelson, executive chef of Tusk & Trotter, is at the helm of the Pig & Swig Hospitality Group concept: "traditional German pub fare with a High South twist."