Tornado watch covers more than half of state 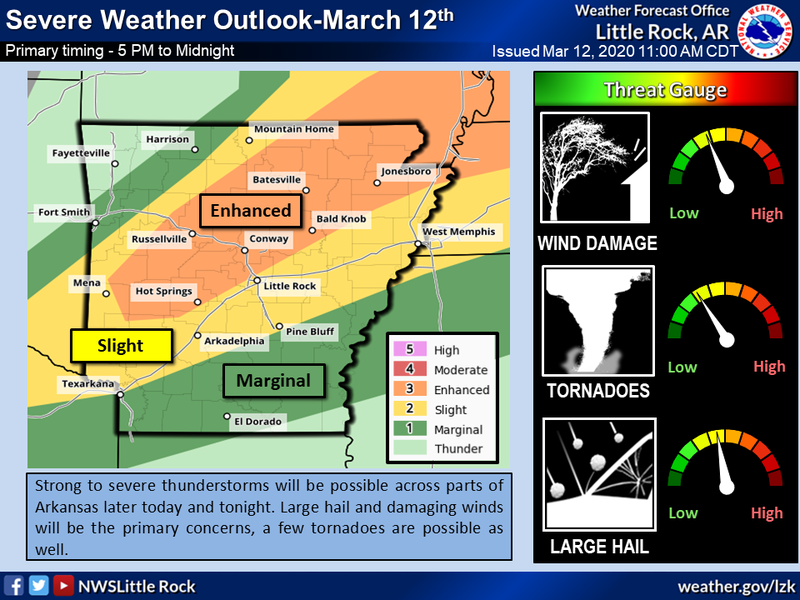 A tornado watch is in effect for more than half of Arkansas until 11 p.m., the National Weather Service said.

The watch stretches from Texarkana to Jonesboro and includes Pulaski County.

Northwestern, southern and southeastern counties are largely excluded from the watch area.

The National Weather Service has expanded the section of Arkansas under an enhanced risk for severe storms on Thursday.

Areas stretching from Hot Springs to Jonesboro are included in the expanded area. Little Rock remains at a slight risk.

Hood said the time for greatest risk in Central Arkansas is expected to be roughly between 5 and 8 p.m.

A large part of Arkansas is under a slight risk for severe weather Thursday as a storm system moves through the state, according to the National Weather Service.

Meteorologist Dan Koch said a strong system will move across Arkansas throughout the day, hitting central areas around sundown, give or take an hour.

The storm brings with it a chance for wind damage or large hail, Koch said.

He said unlike previous storms this week, wind conditions with the storm are also presenting a risk for tornadoes, albeit a low one. He said the chance for tornadoes could fluctuate, depending on conditions as the storm develops and moves.

The risk for severe weather is forecast to be highest in northeast Arkansas tonight where Koch said a warm front may combine with the storm system to create more volatile conditions.

Aside from severe weather, flash flooding is also a concern across the state before the storm system moves out overnight into Friday morning, Koch said.

Additional systems are expected to move through Arkansas in the next few days. The weather service said up to 3 or 4 inches of rain could fall across most of the state in the next seven days, with western Arkansas possibly seeing up to 5 or 6 inches in some areas.

This story was originally published at 10:24 a.m.