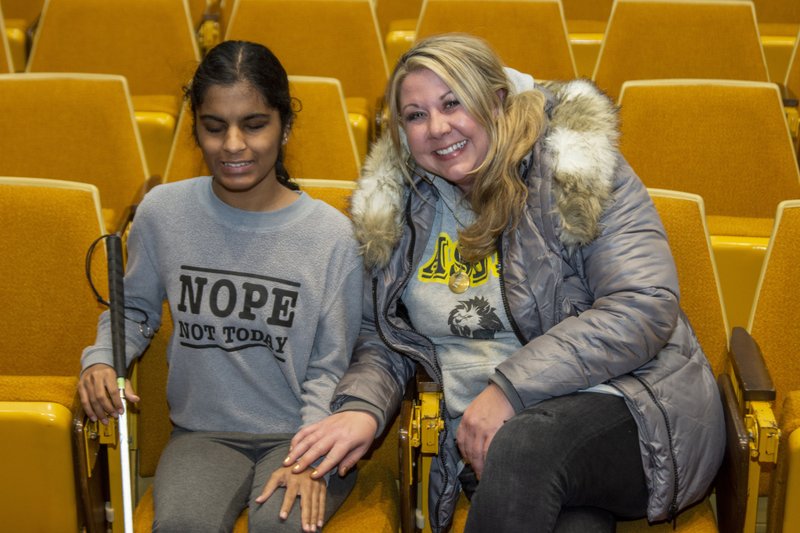 School winner Diya Chakaraborty and her English teacher Rebekah Lewis on 02/26/2020 at Arkansas School for the Blind for a story about Poetry Out Loud, the national poetry recitation competition. (Arkansas Democrat-Gazette/Cary Jenkins)

On Saturday, 26 students from across Arkansas will take the stage, one at a time, during the Poetry Out Loud competition in Little Rock.

They will recite three poems for a panel of four judges, who will score them on accuracy, physical presence, voice and articulation, dramatic appropriateness and overall performance. The winner will advance to the national finals on April 26 in Washington for a chance to win $20,000.

Among the participants at the Central Arkansas Library System's Ron Robinson Theater will be 15-year-old Diya Chakraborty, a freshman at the Arkansas School for the Blind and Visually Impaired. She qualified for the state competition after beating 18 other School for the Blind students in the first-round of the contest Feb. 7. She is the first student from there to compete in the state finals.

"This was a whole new thing," Diya says. "I'd never tried anything like it before, and I was interested in how it works, what do we do, what are the rules?"

She is speaking in the classroom of her English teacher, Rebekah Lewis.

"We were really excited to be a part of it," Lewis says. "We thought it was a great way, especially for our kids, to learn better communication skills."

Alisha Kindrick, a School for the Blind math and science teacher who has two children who attend there, was a supporter of bringing the contest to the school.

"I'm all about setting high expectations for our students and allowing them to do what sighted children do," she says. "We wanted to push our students to be able to do those things. Even though it's challenging, we want them to have the same competition that they are going to have in the real world."

Lewis integrated the competition into her lesson plans, introducing her high-school students to poetry slams and recitations. Students chose the poems they would recite for Poetry Out Loud-approved resources and practiced during class, giving one another critiques along the way. 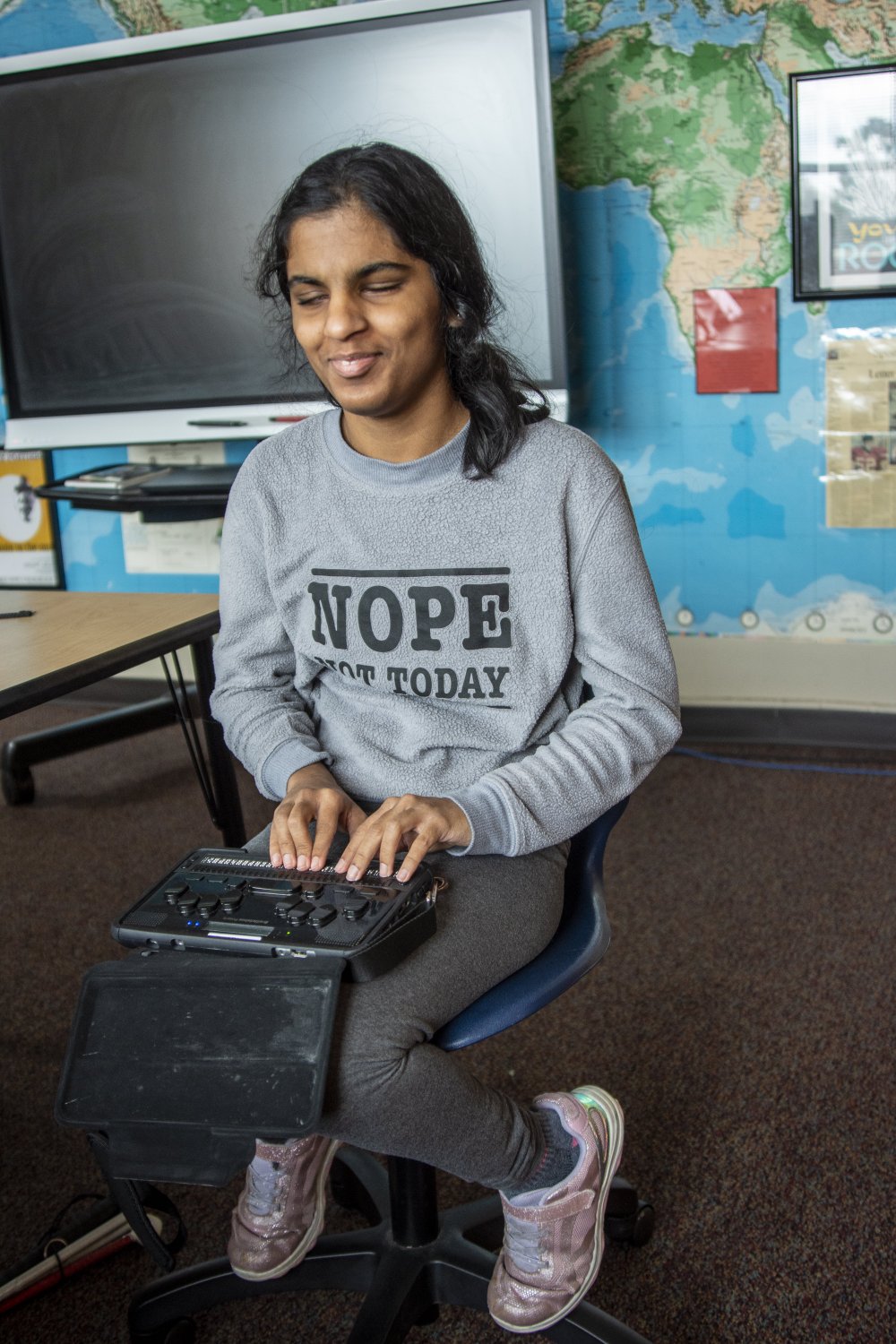 School winner Diya Chakaraborty shows how she searched for he poems on 02/26/2020 at Arkansas School for the Blind for a story about Poetry Out Loud, the national poetry recitation competition. (Arkansas Democrat-Gazette/Cary Jenkins)

The two poems Diya recited at the first-round competition were A Small Moment by Cornelius Eady and January, 1795 by Mary Robinson.

A Small Moment recounts a sweet visit to a bakery on spring day, while Robinson's poem, with its misers, hospitals, "drooping commerce" and "authors who can't earn dinner" is darker.

Diya — who was born with severe retinopathy of prematurity and is blind — pauses for a few seconds when asked why she was drawn to these two poems.

"What was fun about A Small Moment is that it's very happy," she says, before reciting the lines, "'What's that smell ... am I flirting' .... January, 1795 is not a happy poem. I think it's the opposite of A Small Moment. It's dramatic. 'Pavement slippery/ People sneezing/ Lords in ermine, beggars freezing ....'"

Students will recite three poems at Saturday's competition. For her third poem, Diya has chosen Flirtation by Rita Dove.

Sandrekkia Morning is the Arts in Education Manager for the Arkansas Arts Council and coordinates the annual Poetry Out Loud competition in the state.

Morning, a poet and spoken word performer, goes back a bit with Poetry Out Loud. She brought the contest to eStem Charter High School when she was a senior there in 2012 for a class project.

She has also been writing poetry most of her life.

"I had my first poem published when I was in sixth grade, and poetry has always stuck with me," Morning says.

Her mother encouraged her to recite a poem at church, "and I realized I could take it from the page to the stage."

The goal of Poetry Out Loud, Morning says, "is to encourage the study of poetry, but what I think is the most beneficial thing about students learning these poems is that they get a chance to exercise their comprehension and communication skills. They really have to digest and dissect these poems to perform them and communicate to the audience."

For the state competition, students recite three poems. One has to be 25 lines or fewer, one must date from pre-20th century and one can be chosen by the student, according to Poetry Out Loud rules, Morning says.

The state champion will receive $200 for him or herself and $500 for his or her school to buy poetry materials. The champion and a chaperone also receive a trip to Washington to compete at the national finals.

Second place receives $100 and $200 for poetry materials for his or her school.

In 2009, Shenequa Page of Hamburg High School won the state title and represented Arkansas at the national competition.

"It was my first flight," she says. "From the dinners to meeting the winner from the year before, it was so much fun ... I didn't want to come home."

She didn't win but even now, Page says, being part of the event still resonates.

"I always list my Poetry Out Loud accomplishments on every resume. I don't care how long ago it was. That's a huge accomplishment."

Offering advice to this year's competitors, Page says: "This is the time for you to shine .... Relax and let the poetry flow from your heart. Don't worry about trying to sound like someone else."

Diya admits that she's "a little nervous" for the state competition.

"We will rehearse multiple times," Lewis assures her.

Studying all this verse has led Diya to poets like Robert Burns.

"One of his poems is called To A Mouse, and it is really good," she says.

She's also been inspired to write.

"I'm really good with grammar, so I've decided to write my own little story," she says.

A little while later, Diya is onstage at the School for the Blind's Woolly Auditorium. She has put her cane down by her feet and in a voice that is strong, clear and expressive recites Eady's A Small Moment for an appreciative crowd of three.

"I walk into the bakery next door

To my apartment. They are about

To pull some sort of toast with cheese

From the oven. When I ask:

What's that smell? I am being

a poet, I am asking

What everyone else in the shop

Wanted to ask, but somehow couldn't;

I am speaking on behalf of two other

Customers who wanted to buy the

Name of it. I ask the woman

Behind the counter for a percentage

Of her sale. Am I flirting?

Am I happy because the days

Are longer? Here's what

She does: She takes her time

Choosing the slices. "I am picking

Out the good ones," she tells me. It's

Degrees to go. Some days, I feel my duty;

Some days, I love my work."