He faces nation as pandemic declared by Compiled by Democrat-Gazette staff from wire reports | March 12, 2020 at 6:54 a.m. 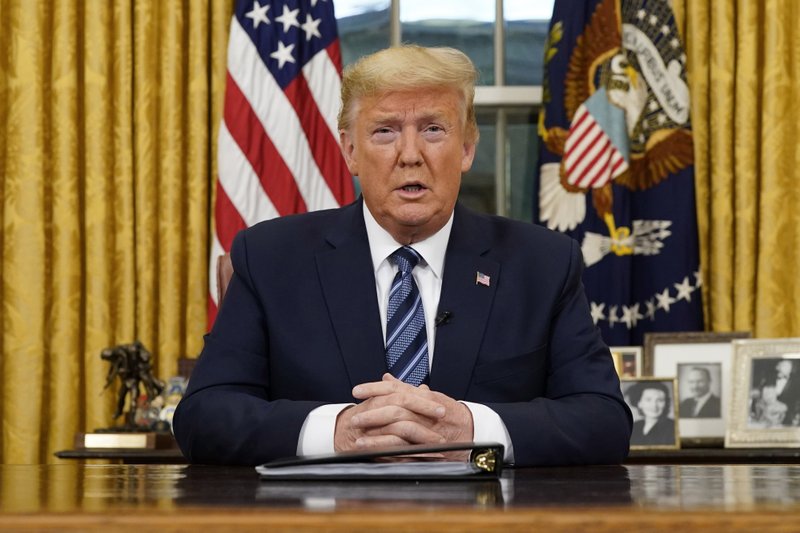 In his address to the nation Wednesday evening, President Donald Trump said that “we are marshaling the full power” of the government and private sector to protect the American people. He said he was directing agencies to provide unspecified financial relief for workers affected by the virus. (The New York Times/Doug Mills)

WASHINGTON -- President Donald Trump said Wednesday that he is suspending all travel between the U.S. and 26 European countries for 30 days beginning Friday as he seeks to combat a viral pandemic.

The president's address follows the World Health Organization's declaration Wednesday that the global virus crisis is now a pandemic as U.S. stocks plunged into bear market territory, several American cities joined European counterparts in banning large gatherings, the NBA suspended its season, and the NCAA made games off-limits to the general public.

"We have called every day for countries to take urgent and aggressive action. We have rung the alarm bell loud and clear," said Tedros Adhanom Ghebreyesus, the WHO chief.

Trump made the announcement in an Oval Office address to the nation, saying the European Union did not act quickly enough to address the "foreign virus" and saying U.S. clusters were "seeded" by European travelers.

"We made a lifesaving move with early action on China," Trump said. "Now we must take the same action with Europe."

Trump said the restrictions won't apply to the United Kingdom and the U.S. would monitor the situation to determine whether travel could be reopened earlier.

Trump said there would be exemptions for "Americans who have undergone appropriate screenings." It also wouldn't apply to cargo.

Homeland Security officials later clarified that the new travel restrictions would apply only to most foreigners who have been in the "Schengen Area" at any point for 14 days before their scheduled arrival to the United States. The area includes Italy, Germany, Greece, Austria, Belgium and others. It doesn't apply to legal permanent residents, immediate family of U.S. citizens or others "identified in the proclamation."

[Video not showing up above? Click here to watch » https://www.youtube.com/watch?v=OFqZN7DC64M]

The president said he was also directing agencies to provide unspecified financial relief "for workers who are ill, quarantined or caring for others due to coronavirus," and asked Congress to take action to extend it.

Trump said the U.S. will will defer tax payments for some individual and business filers for three months to lessen the impacts of the outbreak. He said the Small Business Administration will also make low-interest loans available to businesses.

"This is not a financial crisis," he said. "This is just a temporary moment of time that we will overcome together as a nation and as a world."

Trump also reiterated his call on Congress to pass a cut to the federal payroll tax in order to stimulate the economy.

Trump said "we are marshaling the full power" of the government and private sector to protect the American people.

The president canceled planned trips to Colorado and Nevada "out of an abundance of caution," the White house reported.

In a late development Wednesday, the NBA has suspended its season "until further notice" after a Utah Jazz player tested positive Wednesday for the coronavirus, a move that came only hours after the majority of the league's owners were leaning toward playing games without fans in the arenas.

Meanwhile, the NCAA decided the men's and women's tournament games will be off-limits to the general public.

NCAA President Mark Emmert said Wednesday that he made the decision to conduct both tournaments, which begin next week, with only essential staff and limited family in attendance. The decision comes after the NCAA's covid-19 advisory panel of medical experts recommended against playing sporting events open to the general public.

Emmert told The Associated Press that canceling the tournament was considered.

Also on Wednesday, Tom Hanks and his actress-singer wife Rita Wilson have tested positive for the coronavirus, the actor said in a statement.

Hanks said the couple was in Australia and felt tired, with colds, body aches and slight fevers. "To play things right, as is needed in the world right now, we were tested for the coronavirus and were found to be positive," Hanks said.

The 63-year-old actor said they will be "tested, observed and isolated for as long as public health and safety requires."

Hanks, who also posted his message on social media, signed off saying: "Take care of yourselves!"

The virus can live in the air for several hours and on some surfaces for as long as two to three days, tests by U.S. government and other scientists have found.

Their work, published Wednesday, doesn't prove that anyone has been infected through breathing it from the air or by touching contaminated surfaces, researchers stress.

"We're not by any way saying there is aerosolized transmission of the virus," but this work shows that the virus stays viable for long periods in those conditions, so it's theoretically possible, said study leader Neeltje van Doremalen at the National Institute of Allergy and Infectious Diseases.

For this study, researchers used a nebulizer device to put samples of the new virus into the air, imitating what might happen if an infected person coughed or made the virus airborne some other way.

They found that viable virus could be detected up to three hours later in the air, up to four hours on copper, up to 24 hours on cardboard and up to two to three days on plastic and stainless steel.

For most, the coronavirus causes only mild or moderate symptoms, such as fever and cough. But for a few, especially older adults and people with existing health problems, it can cause more severe illnesses, including pneumonia.

But most people recover. People with mild illness recover in about two weeks, while a more severe illness may take three to six weeks, the WHO says.

Iran and Italy are the new front lines of the fight against the virus that started in China, the WHO said.

"They're suffering but I guarantee you other countries will be in that situation soon," said Dr. Mike Ryan, the WHO's emergencies chief.

WHO officials said they thought long and hard about labeling the crisis a pandemic -- meaning a new virus causing sustained outbreaks in multiple regions of the world.

The risk of employing the term, Ryan said, is "if people use it as an excuse to give up."

But the benefit is "potentially of galvanizing the world to fight."

With officials saying that Europe has become the new epicenter, Italy's cases soared again, to 12,462 infections and 827 deaths -- numbers second only to China.

"If you want to be blunt, Europe is the new China," said Robert Redfield, the head of the U.S. Centers for Disease Control and Prevention.

In response to the mounting crisis, Italy announced that all shops and businesses except pharmacies and grocery stores would be closed nationwide beginning today and designated billions in financial relief to cushion economic shocks from the virus.

These measures are on top of travel and social restrictions.

In Iran, the hardest-hit country in the Middle East, the senior vice president and two other Cabinet ministers were reported to have been diagnosed with covid-19. Iran reported another jump in deaths, by 62 to 354 -- behind only China and Italy.

China's new worry is that the coronavirus could reenter from abroad. Of 24 new cases reported Wednesday, five arrived from Italy and one from the United States. China has had over 81,000 virus infections and over 3,000 deaths.

In the Mideast, most of the nearly 10,000 cases are in Iran or involve people who traveled there. Iran's semiofficial Fars news agency said they include Vice President Eshaq Jahangiri.

Britain's government announced a $39 billion economic stimulus package and the Bank of England slashed its key interest rate by half a percentage point to 0.25%.

Pope Francis is live-streaming prayers from the privacy of his Vatican library as police barred access to St. Peter's Square.

In Denmark, Prime Minister Minister Mette Frederiksen announced that all schools, preschools and universities will close as of Monday.

Officials in Seattle announced that public schools would close for about 53,000 students starting today and large gatherings were banned in San Francisco and in Washington state, the hardest-hit U.S. state, with 29 deaths.

Washington Gov. Jay Inslee prohibited activities involving more than 250 people. The ban, encompassing an area of 4 million people, applies to houses of worship and baseball's Seattle Mariners, whose home games will be moved.

In San Francisco, Mayor London Breed banned all gatherings of 1,000 or more people for the next two weeks in the city of 880,000. California's Santa Clara County, home to San Jose and Silicon Valley, did the same.

Instead of hosting 100,000 at its twice-yearly conference in Salt Lake City next month, the Church of Jesus Christ of Latter-day Saints said it will hold the gathering online and on TV.

The National Association of Broadcasters canceled its annual trade show, scheduled for April in Las Vegas. It typically draws 100,000 people.

And at a Congressional hearing in Washington on Wednesday, Dr. Anthony Fauci, director of the National Institute of Allergy and Infectious Disease, said "We have got to assume it is going to get worse and worse and worse," adding that Americans should not assume the virus will die off like the flu in warmer weather as President Donald Trump has said.

Rep. Stephen Lynch, D-Mass., who represents a state where there are almost 100 confirmed cases of the virus, pleaded with Fauci to speak out about the threat it poses.

"You should be forthright," he said, adding, "Standing behind [Trump] and nodding silently with an eye roll once in a while is not going to get it."

Fauci responded testily, "I have never ever held back telling exactly what is going on from a public health standpoint."

"We must be much more serious as a country about what we might expect," Fauci told lawmakers on the House Oversight and Reform Committee. "We cannot look at it and say, 'Well, there are only a couple of cases here; that's good.' Because a couple of cases today" are going to be "many, many cases tomorrow."

Dr. Robert Redfield, director of the Centers for Disease Control and Prevention, said that "this is the time for everyone to get engaged." 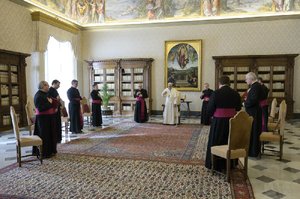 Pope Francis (background) holds his general audience Wednesday as it is livestreamed from the privacy of his library as the Vatican took drastic coronavirus lockdown measures. Italy’s cases soared to 12,462 infections and 827 deaths. (AP/Vatican News) 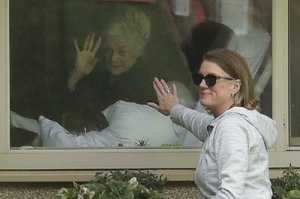 Photo by AP
Judie Shape (left), who has tested positive for the coronavirus, waves to her daughter, Lori Spencer, after they visited over phones at the Life Care Center in Kirkland, Wash. (AP/Ted S. Warren) 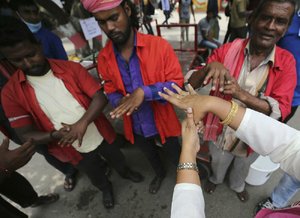 Photo by AP
A medical officer demonstrates to porters the way to use hand sanitizer during an awareness campaign Wednesday at a train station in Bangalore, India. (AP/Aijaz Rahi)