Danny Trejo, back from the dead again and again 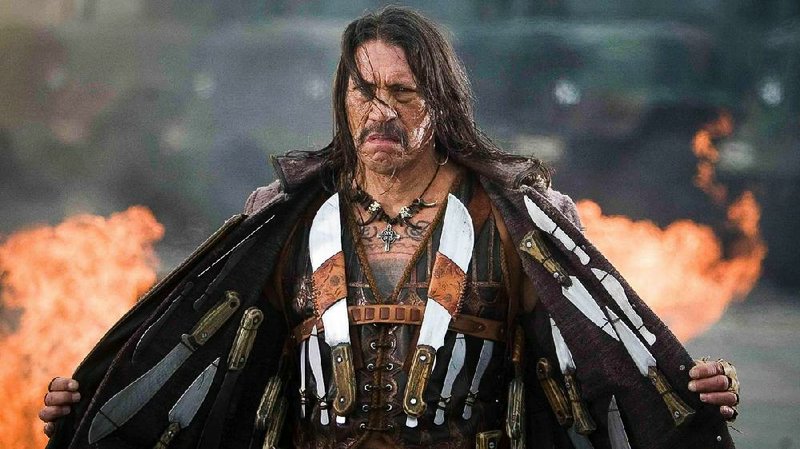 Danny Trejo has died on screen more than any other actor.

According to the Movie Mortality section of BuzzBingo.com, the Los Angeles-born actor has died 65 times, which is five more fatalities than runner-up Christopher Lee (The Horror of Dracula, The Lord of the Rings). I learned this fact a couple of days after he had come back from the movie grave to make another call.

He mentioned that he filmed a couple of movies in Arkansas, then added, "After 382 appearances, it's hard to remember."

Trejo probably wouldn't have made the list if it weren't for his long hair, weathered visage and his distinctively gruff voice. His character's (Tortuga) demise on the cable series Breaking Bad was as unforgettable as Giancarlo Esposito's final scene as Gus Fring.

Whereas Daniel Day-Lewis has made a career of burying his identity in a role, Trejo's consistently unique presence has proved to be an asset in his long career.

"We still have the real pretty boys, the people who could be on calendars," he says. "And then you gotta have some variety. You gotta have a guy who can't make the calendar."

Those who'd like to see Trejo's non-calendar-friendly face for themselves off-screen can catch him when he is the official starter of Hot Springs' 17th Annual First Ever World's Shortest St. Patrick's Day parade at 6:30 p.m. Tuesday. Cheech Marin will be the Grand Marshal, and the Dallas Cowboys Cheerleaders will perform at 5 p.m. before the parade starts. Rockers Foghat will perform after the parade.

Watching parades is something Trejo has loved since childhood.

It shouldn't be surprising to see Trejo resurfacing after one of his many demises to start a parade. He has emerged from a place some people never leave. During the '60s and '70s, Trejo had served time in prison for drug offenses and armed robbery. Running into a fellow inmate helped him find a more legitimate line of work.

"I gave up alcohol and drugs. I stopped using them completely. I just started dedicating my life to help other people," he says. "From there, things just kept happening. Everything good that happened to me has happened as a direct result of helping someone else, everything.

"I had run into a friend named Eddie Bunker [Mr. Blue from Reservoir Dogs], who was a writer, and he was the one who actually gave me my start in Hollywood. He'd seen me win the lightweight and the welterweight title at San Quentin State Prison. He said we need somebody to train Eric Roberts how to fight [for the 1985 movie Runaway Train]. The director [Andrei Konchalovsky] saw that I could handle Eric and gave me a job, and all of the sudden, I was an actor."

But Trejo doesn't always play the villain. In August, he and a fellow Los Angeles bystander named Monica Jackson rescued a child trapped in an overturned car. It was an act that seemed more reminiscent of his most famous role, the sullen but resourceful ex-Mexican federale Machete Cortez. The blade-wielding tough guy is a vigilante whose quick thinking makes him a grosser version of MacGyver.

"(Robert Rodriguez and I) had thought about Machete when we first did the movie Desperado," he says. "He liked the way that I dealt with people and the way that people kind of gravitated toward me. He said, 'I've got this character Machete. He's a federale who fights with machetes.

"We kept talking about it, and when we did Spy Kids, we named the character (I played) 'Uncle Machete.' When we did Grindhouse, we did a fake trailer. When we walked out of the theater, everybody said we want to see that movie. I saw it with Hollywood elites screaming, 'We want Machete!' So, we did it."

When asked about the appeal of the role, Trejo says: "I think it's because he was a down-and-out farm laborer who fought for justice, and that's what everybody wants. Everybody wants a hero, and he fought for the poor. When you look at the homeless crisis, it's not just Mexicans; it's everybody. He's a hero for everybody."

Trejo also reached wide audiences for a Snickers commercial that aired during the Super Bowl. In a vintage clip from The Brady Bunch, Trejo's face and body take the place of Marcia Brady until "she" eats the candy.

"He said, 'There's one problem: You're going to play Marcia Brady.' I said, 'I don't care!

Digging through YouTube reveals lots of other delightful moments that might not have made your Netflix or Sling (which Trejo has advertised) queue. For example, in a limited series BMW produced, The Driver, Trejo plays Satan's henchman and chauffeur. In the episode "Beat the Devil," directed by the late Tony Scott, Gary Oldman plays the Prince of Darkness, who refuses to change his contract with James Brown (the actual Godfather of Soul). This leads to a race between Trejo and Children of Men star Clive Owen.

"Marilyn Manson was in it, and it was so funny when Gary Oldman said to us, 'You're both scary,'" Trejo says.

Despite his long resume and the fact that he's 75, Trejo has another career, a restaurateur. Trejo's Tacos can be found in several L.A. locations. Having starred in the low-budget movie Bad Ass for producer Ash R. Shah, the two teamed up on the venture.

"We have seven locations," he says. "Two days ago, we opened up another one. Most restaurants die in the first year, and we keep on going. Everyone keeps asking me what's your secret. I say it's no secret. It's just good food. They'll come by for a celebrity, but if the food's not good, they're not coming back."

Print Headline: Danny Trejo, back from the dead again and again