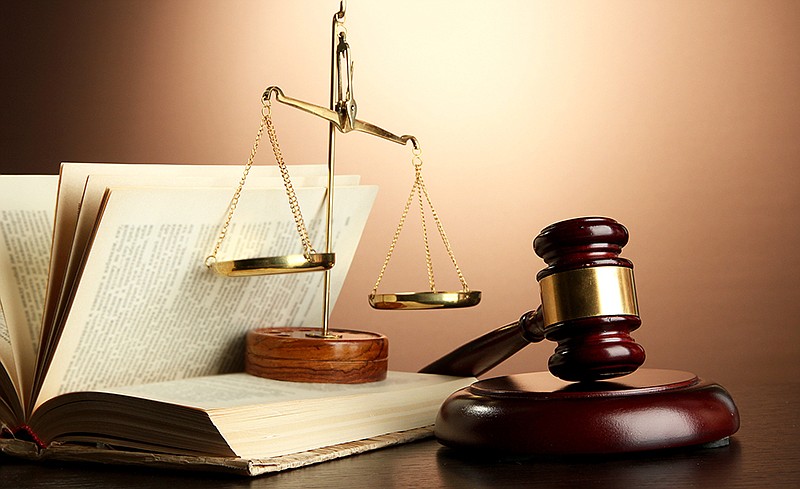 A gavel and the scales of justice are shown in this photo.

A federal jury deliberated less than two hours Thursday before finding Eric Scott Kindley, a former prisoner transport officer, guilty of sexually abusing two women as he drove them across Arkansas to out-of-state jails in 2014 and 2017.

The 52-year-old California man was convicted of two counts of violating the women's civil rights -- by forcing one woman to perform oral sex on him and by digitally raping the other while grabbing her breasts. The second woman testified that he tried to force her to perform oral sex on him as well, but her screams caused lights to come on nearby and prompted him to get back into his van.

Kindley was also convicted of a third charge of using a firearm to carry out the assault on the second woman. She said he repeatedly placed his hand on the gun in his holster, which he wore on his hip, and told her, "It only takes one bullet to the head."

Both women were assaulted at night, when they were alone with Kindley in his white Dodge Caravan, before or after he picked up other prisoners on the multiday transports. Both said he made them move from a third row of the van to the second row, right behind him, so he could look them over in his rearview mirror while he talked extensively about sex and asked them intimate questions they didn't want to answer.

Both women were restrained at the time by handcuffs, leg shackles and waist chains.

In a jury trial that began Monday in the Little Rock courtroom of Chief U.S. District Judge D. Price Marshall Jr., the women said that when they asked Kindley to make a bathroom stop, he would use his cellphone to call the nearest jail and get permission to bring a prisoner in for a bathroom break. Then, they said, he would ignore his GPS and pretend to be lost on back roads, finally pulling over and parking in dark areas that appeared isolated.

The first woman testified that he didn't let her out, but raped her in the van, without removing her handcuffs, and then drove her to a jail where she was held overnight. Receipts found years later during a search of Kindley's house indicated the Feb. 16, 2014, attack happened somewhere along a a route that stretched from Prescott to Greenbrier.

The second woman told jurors that Kindley uncuffed one of her hands to allow her to pull down her leggings and urinate, but then threw her against the side of the van and assaulted her. The FBI tracked the location of his cellphone at the time of that assault on Jan. 28, 2017, to an area near Atkins and east of Russellville in Pope County, where records indicated the van was moving slowly or not at all for about 43 minutes.

The women said they didn't report him during stops at other jails because they believed he was a law enforcement officer who was friends with other officers at the jails, and that they wouldn't be believed.

During closing arguments Thursday, defense attorney John Wesley Hall Jr. told jurors that the women's testimony "sounded scripted," that there were "holes" in the government's case and that "this case just isn't believable."

Assistant U.S. Attorney Fara Gold of Washington, D.C., told jurors that Kindley "was counting on the fact that no one was going to pay attention to these women" because they were mere inmates, "as though they weren't even human." But she said he didn't count on them eventually telling their stories, "and he certainly didn't count on these women traveling one by one from all over the country" to testify against him.

As a private transport officer hired by jails to take prisoners from a city where they had been arrested to a jail in another jurisdiction that had issued the arrest warrant, Kindley wasn't regulated. He owned his own company -- operating as Court Services Inc. from 2002 to 2013 and then as Group 6 LLC, doing business as Special Operations Group, from 2013 until his arrest on June 1, 2017.

He wasn't required to travel with a woman, as other law enforcement officers testified they routinely do while transporting female prisoners, to protect themselves from liability and to protect the prisoners.

However, jurors were shown photographs of the passenger seat of Kindley's van on which he kept a mint-green hat on the headrest and a yellow scarf draped around it, making it appear through tinted windows that he was accompanied by a female officer.

FBI Agent Kyle Roberts of Arizona, who began the investigation in response to a call from the Apache County jail in St. Johns, Ariz., where the 2017 victim was dropped off, testified in 2018 that Kindley was arrested a day after he signed up as an Uber driver. Roberts said agents were monitoring Kindley's smartphone, which showed that he was conducting searches about Uber drivers having sex with passengers, and decided to arrest him immediately rather than continue watching him while gathering evidence.

In addition to the two Arkansas victims, Marshall permitted testimony from four other women Kindley had transported in other areas of the country.

One testified that he went into a bathroom stall with her and watched her urinate, then kept her seated on the toilet while forcing her to perform oral sex. Another said he raped her in the van with one hand on his gun. A third said he pulled her out of the van and demanded oral sex from her but she resisted and he backed down. The fourth said he bragged about having sex with his female prisoners and called himself "blessed," referring to the size of his penis, but didn't assault her, which she attributed to her attitude and tough-looking physical appearance.

Kindley, who will be sentenced by Marshall after a pre-sentence report is prepared, is facing similar charges in federal court in California.