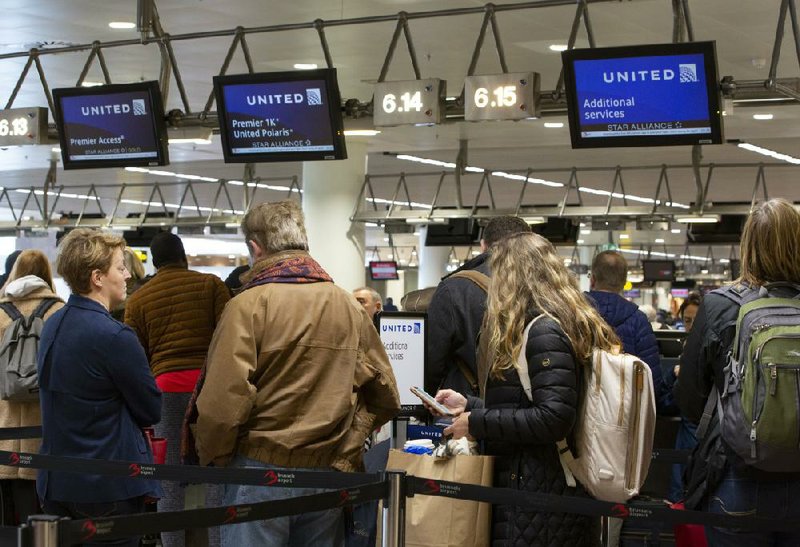 People wait to check in for a flight to Chicago on Thursday at Brussels International Airport. Airlines scrambled to cancel flights and reassure anxious travelers after President Donald Trump announced a 30-day ban on Europeans traveling to the U.S. (AP/Virginia Mayo)

Already reeling from a steep decline in bookings because of the coronavirus outbreak, the airlines now stand to lose millions of dollars in revenue from a halt to trans-Atlantic flights, which account for a big chunk of their international business.

On Thursday, Norwegian Air, a once fast-growing low-fare carrier that flies to many U.S. cities, said it would temporarily lay off half of its staff and ground 40% of its long-haul flights and 25% of shorter flights.

"Suspending travel on such a broad scale will create negative consequences across the economy," said Alexandre de Juniac, chief executive of the International Air Transport Association, an industry group. "Governments must recognize this and be ready to support" the industry.

According to the association, about 200,000 flights last year carried passengers between the United States and 26 countries targeted in Trump's order, averaging about 550 flights carrying 125,000 travelers per day.

Over the next four weeks, the ban will result in the cancellation of more than 6,700 flights, the equivalent of 2 million seats, in each direction, according to an analysis by OAG, an aviation data provider.

Confusion reigned after Trump's announcement, with frantic travelers struggling to understand the consequences of the ban and airlines racing to adjust operations on little notice ahead of its implementation tonight.

"This action will hit U.S. airlines, their employees, travelers and the shipping public extremely hard," said Nicholas Calio, president of Airlines for America, an industry group. "However, we respect the need to take this unprecedented action and appreciate the administration's commitment to facilitate travel and trade."

But others in the industry were more critical. Sara Nelson, president of the Association of Flight Attendants, the union representing flight attendants at 20 airlines, including United, said that the airline industry was "pretty blindsided" by Trump's announcement.

"It created total pandemonium," Nelson said. "Airline employees had no idea what this meant, and for some it was completely disrupting their lives. They weren't even sure if they were going to have a job in the next 24 hours or get home."

Among flight attendants, there is widespread fear about job losses, she added. "The trajectory that this is on right now is beyond job loss, it's about whether or not the industry can actually operate," Nelson said. "You can't operate a flight when no one wants to be on it."

Even before the ban, investors were reassessing the financial prospects of airlines, several of which sought bankruptcy protection in the past two decades.

"The airlines are in cash preservation mode, and we fully expect to see credit facilities extended and increased in the next week," Helane Becker, an airline analyst with Cowen, wrote in a research note Thursday. "We previously stated U.S. airline bankruptcies were unlikely and in the near-term that still remains the case but if bookings do not improve in the next three months things could deteriorate quickly."

Delta said Wednesday night that it would waive change fees for all customers traveling to, from or through Europe and the United Kingdom through May. American Airlines, which operates 15 daily flights from the parts of Europe affected by the ban, said that it was "committed to taking care of any affected customers by assisting them with rebooking" and that it was reaching out to those affected.

Travel and tourism between the United States and Europe, including areas not covered by the ban, is a business totaling roughly $130 billion annually, according to U.S. government data.

After the ban was announced, Norwegian Air said it would temporarily lay off half of its staff and ground 40% of its long-haul flights and 25% of shorter flights.

"This is an unprecedented situation, and our main priority continues to be the care and safety of our customers and colleagues," Jacob Schram, the company's chief executive, said in a statement. "The new restrictions imposed further pressure on an already difficult situation. We urge international governments to act now to ensure that the aviation industry can protect jobs and continue to be a vital part of the global economic recovery."

Last week, an international airline group estimated that the virus could wipe out as much as $113 billion in airline revenue worldwide, a forecast made before Trump's travel restrictions on Europeans and other limits by countries including Israel, Kuwait and Spain.

"Airlines will need emergency measures to get through this crisis," de Juniac said, calling on governments around the world to consider extending credit to airlines or reducing taxes and other costs.

In addition to Trump's travel ban affecting the 26 European countries that make up the Schengen Area, the State Department warned Americans that they should reconsider all international travel, the most severe caution it can offer short of "do not travel."