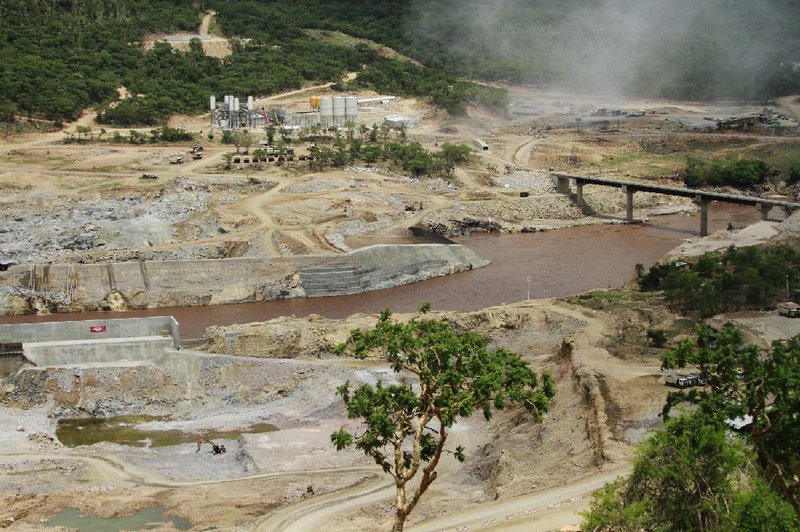 The Blue Nile flows near Assosa, Ethiopia, where the $4.6 billion Grand Ethiopian Renaissance Dam is under construction. (AP/Elias Asmare)

ADDIS ABABA, Ethiopia -- Ethiopia refuses to be pressured by the United States into signing a deal with Egypt and Sudan over its controversial dam on the Nile River, says Ethiopia's foreign minister.

In an interview with The Associated Press, Gedu Andargachew said the three countries need to resolve their differences without outside pressure.

"In the talks held in Washington, D.C., around mid-February, we were pressured to quickly reach an agreement and sign a deal before resolving outstanding issues," Gedu said, adding that his delegation told U.S. officials at the time that Ethiopia would not sign an accord under such duress.

"Then U.S. officials drafted and sent us an agreement, which we also opposed because the U.S. only has an observer status," he said. "We are of the opinion that an agreement reached under pressure is not in the best interest of anyone party to the talks."

Tensions are rising over the impasse between Ethiopia and Egypt over the $4.6 billion Grand Ethiopian Renaissance Dam that Ethiopia is building on the Nile River, Africa's longest river. The stresses escalated after Addis Ababa did not attend the latest round of talks held in Washington on Feb. 26, citing the need for further domestic consultations.

When Ethiopia did not attend the Washington meeting, Egypt's Foreign Ministry criticized what it called "Ethiopia's unjustifiable absence ... at this critical stage in the negotiations" and added "Egypt will use all available means to defend the interests of its people."

Following the unsuccessful Washington meeting, President Donald Trump phoned Egyptian President Abdel Fattah el-Sisi and "expressed hope that an agreement on the Grand Ethiopian Renaissance Dam would be finalized soon," according to a statement issued by the White House.

Ethiopia is now drafting its own proposal on how to resolve the standoff and it will be presented to Egypt and Sudan soon, said Gedu.

"We won't subscribe to an agreement just because the U.S. and the World Bank came forward with it. We need to take time and sort out sticking points," he stressed.

Ethiopia's top military officers visited the site of the dam Thursday and issued a statement in which they vowed to "retaliate if there are any attacks on the dam," a veiled warning to Egypt not to try to sabotage the dam.

Ethiopia's construction of the mega-dam, which will be Africa's largest and produce 6.4 gigawatts of power and is now about 71% complete, has been contentious for years. Ethiopia says the power from the dam is crucially needed to help to pull many of its 100 million people out of poverty, while Egypt warns that filling the dam's reservoir too rapidly in the coming years will threaten its fair share of Nile River waters.

Ethiopia seeks to fill the dam in seven years, but Egypt proposes it should be done more slowly, over a period of 12 to 21 years, to minimize the reduction of the flow of Nile waters. Egypt relies on the Nile River for agricultural irrigation and water for its population of about 100 million.

The U.S. and the World Bank were brought in to the talks after el-Sissi last year pleaded with Washington and the international community to help find a solution to the long-running dispute.