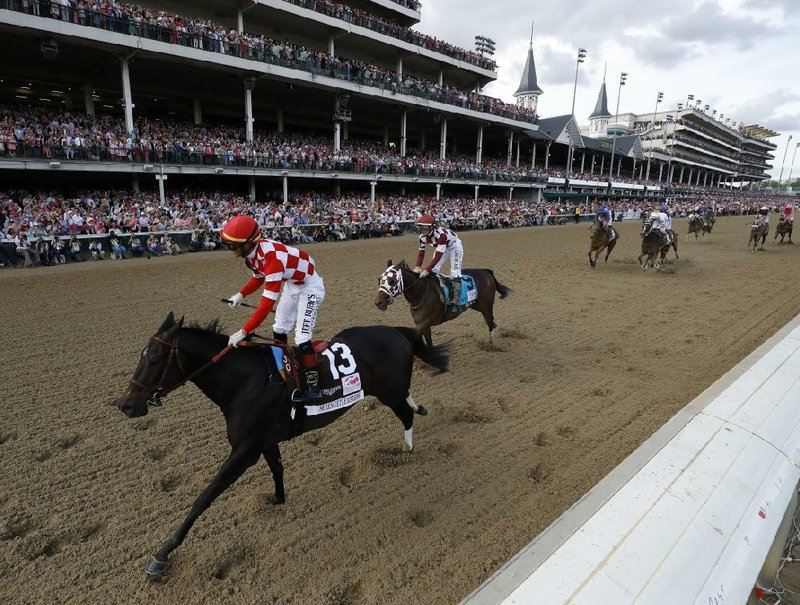 Serengeti Empress (13), who won the Kentucky Oaks a year ago, is running in today’s Azeri Stakes at Oaklawn in Hot Springs. Serengeti Empress is listed at 9-5 odds on the morning line. (AP/Matt Slocum)

HOT SPRINGS -- A rematch among three fillies and a mare who finished less than a length apart in a recent graded stakes race will appear before a limited audience at Oaklawn today.

Fillies Lady Apple, Serengeti Empress and Street Band, and 5-year-old mare Mylady Curlin are four of the seven entrants in the Grade II, $350,000 Azeri Stakes for fillies and mares who are 4 years old and up. The 1 1/16-mile race is set for 4:50 p.m. as the ninth on Oaklawn Racing Casino Resort's 11-race card.

"It really was a great race," said Larry Jones, trainer of Street Band. "It was a mad dash to the wire. Everybody had their shot. It was really good. A good bunch of horses, and here we are again."

In Oaklawn's response to the worldwide coronavirus pandemic, racing fans will not be allowed on site. Only track management and employees, horsemen, racing officials, veterinarians, emergency medical personnel and media representatives will attend. It is an unprecedented anomaly for the 116-year-old facility, particularly on a day with two other stake races scheduled, including the Rebel Stakes and the $350,000 Essex Handicap for older horses.

The Essex-Azeri-Rebel combination attracted an estimated crowd of 45,500 in mid-March last season. No more than a few hundred people, categorized as essential, will gather on Oaklawn's racing grounds today.

Front-running Serengeti Empress was the Houston Lady Classic's 3-5 favorite off a third-place finish in the Grade I Breeders' Cup Distaff at Santa Anita Park in November. She was a 1 3/4-length Grade I Kentucky Oaks winner at Churchill Downs on May 3, but Serengeti Empress was passed late at Sam Houston by Lady Apple, who emerged as the winner from a four-horse wall in the final few yards.

Lady Apple, from the barn of Hall of Fame trainer Steve Asmussen, has won four consecutive Grade III stakes, a streak that began with Oaklawn's Fantasy Stakes on April 12.

"I'm not taking anything away from the winner, but I thought it was a real missed opportunity for us," Amoss said. "One of the mistakes I think we made in the race, we slowed the pace down so much on the front end that we really kept the entire field in the race. That was disappointing to me.

"The second thing was, we didn't protect the rail, and the winner came right through on the rail and won the race. I'm very much looking forward to trying again and seeing if we can't do better."

Amoss said he's impressed by Talamo, who moved from the California circuit to Oaklawn in January.

"I will talk to Joe about it, but I know Joe is a real student of the game and watches a lot of replays," Amoss said. "The great thing about that is, when I talk to him about it, he's already going to have it in his mind."

Street Band, trained by Larry Jones and ridden by Sophie Doyle, finished third in the Houston Ladies Classic, one-fourth of a length in front of fourth-place Mylady Curlin, who is trained by Brad Cox. Larry Jones said he thought Street Band ran further than the margin that separated her from the winner.

"I got beat 6 feet, and I sure had the widest trip of anybody in there," Jones said. "I know I ran more than 6 feet farther than those others did. That's what I keep telling me, you know, but I know we fit. I'm sure everybody had a reason they can do better than what they did, so it's going to be interesting."

STREET BAND*** won four of eight races in 2019, including a Grade I and Grade II stake. She was narrowly defeated against similar in the Houston Lady Classic, and she may be double-tough if the track is wet. SERENGETI EMPRESS used her speed to advantage winning the Grade I Kentucky Oaks last spring. The exceptionally quick filly may have too much speed and class for this field. LADY APPLE upset the top two fillies by winning the Houston Lady Classic, and she is unbeaten in three career races at Oaklawn.