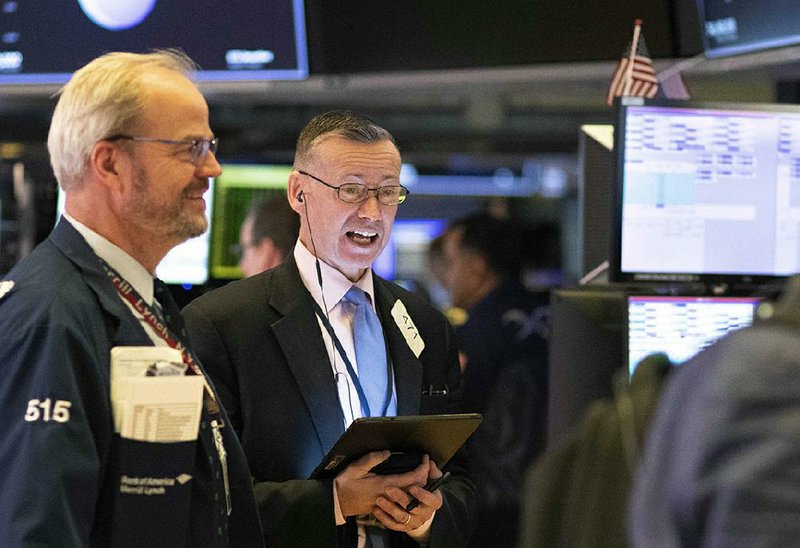 Traders work Friday at the New York Stock Exchange where stocks regained most of their losses from Thursday’s rout. More photos available at arkansasonline.com/314stocks/. (AP/Mark Lennihan)

Stocks rallied Friday, rebounding from their worst day in more than 30 years, after President Donald Trump said leaders of private companies in the United States had agreed to help with efforts to test for the coronavirus and declared a national emergency that would free billions in funding to fight the epidemic.

The rally recouped many of the losses from a day earlier, when the index experienced its worst slide since the Black Monday crash of 1987 and European indexes had one of the worst drops on record. The major indexes each closed with gains of more than 9%.

Trump said the administration was working with Google to develop a website to determine whether an individual needs a test -- a move aimed at avoiding overwhelming the health system with people who are ill but do not necessarily need to be tested for coronavirus.

The chief executives of Walmart, Target and Walgreens all said they had agreed to make facilities available for testing. Executives from CVS Health, Roche Diagnostics and Signify Health were also in attendance at the news conference.

Trump also said he would waive interest on all student loans held by all government agencies and that the energy secretary would be buying "large quantities of oil" to fill up the country's strategic reserve -- an effort to bolster flagging oil prices.

Financial markets have been nothing if not inconsistent for the past three weeks, plunging and then rising, and then plunging again, as each day brought new measures to contain the outbreak and new worries that the economy, workers and businesses would take a hit as a result of them.

Gallery: Stocks opens sharply higher on Wall Street a day after the worst drop since 1987

Friday's session capped a dizzying week on Wall Street, with wild swings driven largely by uncertainty over how much damage the coronavirus would cause to the global economy. By Thursday, the Dow had suffered two drops of more than 2,000 points and the longest-ever bull market had ended, as Trump's ban on the entry to the United States from most European countries disappointed investors, who had been waiting for Washington to take stronger steps to bolster the economy.

Then on Friday stocks rallied, shooting sharply upward in the last half-hour of trading as investors appeared to gain confidence that the Trump administration has a plan to combat the outbreak from both a health care and economic perspective.

Despite Friday's pickup, the market still ended the week with its second-worst weekly loss in the past 10 years. In just a few weeks, U.S. stocks have lost all the gains made during 2019, one of the best years for the market in decades. All the major indexes are in what traders call a bear market.

Investors have been clamoring for strong action from the U.S. government to combat the outbreak's effect on businesses and workers. News that the White House and Congress were trying to reach an agreement on a package to provide sick pay, free testing and other resources helped boost the market.

Stocks jumped in the early going Friday after Treasury Secretary Steven Mnuchin said on CNBC that the two sides were "very close to getting this done." But during a late-afternoon White House news conference, Trump said the White House and Congress had yet to agree on a broader aid package. He said he doesn't believe House Democrats are "giving enough."

Speaker Nancy Pelosi said the House would approve its own coronavirus aid package and urged the Trump administration and congressional Republicans to "put families first" by backing the effort to provide Americans with relief.

Trump did not rule out a rescue package for the airline and cruise industries.

Trump said Friday that he would fill up the Strategic Petroleum Reserve, which for decades has been used as a cushion in case of fuel shortages caused by global political events or natural disasters.

The reserve has about 635 million barrels of oil and is equipped to store another 75 million barrels, which is equivalent to three-quarters of one day's global oil production. By adding to it, the government would have to buy oil on the market, increasing overall demand and lifting prices. Oil prices, which have tumbled in recent weeks as demand has plummeted because of the coronavirus outbreak, shot up about 6% after Trump's remarks.

"It won't clean up the market, but it is an important first step," said Larry Goldstein, a director of the Energy Policy Research Foundation, an industry and government funded research organization.

Wall Street's meltdown over the past month has erased most of the stock market gains since Trump's election in November 2016.

Some analysts believe a recession is already underway, and that the market swoon has further -- some say much further -- to go.

"The coronavirus likely tips us into a recession because we were hit with a one-two punch from the virus," said Dan Niles of AlphaOne Capital Partners, a San Francisco hedge fund. "It is both demand and supply destruction, unlike 9/11 or the tech bubble bursting, which was just demand."

Asian markets were gutted Friday, with Japan's Nikkei 225 shedding more than 6%, while Hong Kong's Hang Seng Index closed down about 1.1%. But European markets shared in the rebound after one of their worst days in history, boosted by intervention plans from the European Central Bank. The benchmark Stoxx 600 index finished Friday up 1%, a big rebound from its 11% loss Thursday.

Friday's rally was broad, with technology stocks accounting for a big slice of the gains. Shares in cruise line operators, airlines and hotels -- among the hardest-hit stocks as people canceled vacations and companies shut down business trips -- headed higher.

Investors' anticipation of a government stimulus effort and a rate cut by the Fed next week likely put traders in a buying mood, though it's not unusual for stocks to rebound a day after a big decline, something Wall Street calls a "dead cat bounce."

"I don't know if I would call this a dead cat bounce, but I would certainly not call it a trend," said Katie Nixon, chief investment officer at Northern Trust Wealth Management. "Maybe it reflects a little more optimism that we're getting a fiscal impulse that will help support the economy, and by extension, the market while we get through this transitory period of economic weakness."

"At this point, almost everyone in the country who is paying attention knows about the problem, knows about the risks, and knows in some detail about what to do to mitigate those risks. We are at maximum public awareness -- and probably at least close to maximum public fear," Brad McMillan, chief investment officer at Commonwealth Financial Network, wrote in commentary Friday. "Given this maximum awareness, I would suggest we may also be close to maximum economic and market impact."

Information for this article was contributed by staff members of The New York Times; by Alex Veiga and Damian J. Troise of The Associated Press; and by Thomas Heath and Taylor Telford of The Washington Post.