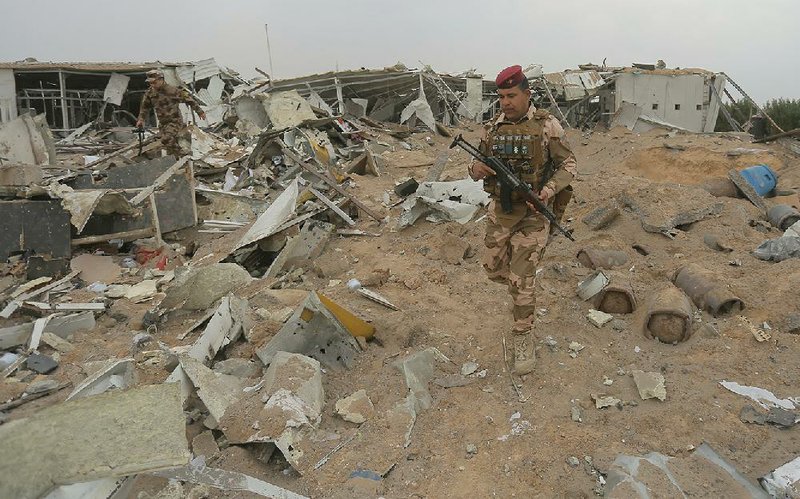 Iraqi soldiers on Friday inspect the destruction left at an airport complex in Karbala after U.S. jets fired missiles Thursday on several weapons depots in Iraq in retaliation for the deaths earlier this week of American and British servicemen at a base north of Baghdad. (AP/Anmar Khalil)

WASHINGTON -- The U.S. retaliatory airstrikes against militants in Iraq destroyed five weapons depots, but the top U.S commander for the Middle East acknowledged Friday that there are many similar sites that the U.S. has not hit because of potential civilian casualties and political sensitivities with the Iraqi government.

Marine Gen. Frank McKenzie, chief of U.S. Central Command, said the decision to target the Iranian-backed Shiite militia group that killed American and British troops in a rocket attack this week sends a strong message to Iran and its proxies. But he said that as the threat of attacks remains high and tensions with Iran have not gone down, the U.S. is beefing up military assets in the region.

"What should now be obvious to everyone is you're not going to be able to fire those at a U.S. or coalition base, hurt or kill our people, and escape unscathed," McKenzie told Pentagon reporters Friday. He said the U.S. has been aware of the weapons sites and knows where there are more, but has exercised "restraint" in bombing them because in some cases strikes would kill "a lot" of civilians. He said the U.S. works with the Iraqi military to take out the sites, but at times that doesn't work.

The United States and Iraq were at odds over the impact of the airstrikes, with McKenzie saying the munitions hit military targets while Iraq insisted that there were regular troops and a civilian among the dead.

The U.S. military said it had launched "defensive precision strikes" against targets linked to the Kataib Hezbollah group, calling them a proportional response.

McKenzie said the strikes hit five facilities used by Kataib Hezbollah to store advanced conventional weapons. "The strikes, carried out by manned aircraft, all occurred south and west of Baghdad, he said.

He showed before and after photographic imagery of sites in Jurf al-Sakhar, Karbala, Al Musayyib and Arab Nawar Ahmad, and said they showed that precise weapons were used to maximize damage but limit civilian harm.

"We assessed that each location stored weapons that would enable lethal operations against U.S. and coalition forces in Iraq," the general said. "We also assessed that the destruction of these sites will degrade Kataib Hezbollah's ability to conduct future strikes." McKenzie said the U.S. military was "very comfortable with the level of damage that we were able to achieve" at those sites.

But in Iraq the strikes were met with a flurry of condemnation. The Iraqi military described the attacks as "treacherous," saying three regular soldiers had been killed, as well as two policemen whose bodies had yet to be recovered from the rubble. Iraq's president, Barham Salih, described the strikes as a "violation of national sovereignty."

A Shiite endowment in the holy city of Karbala said the strikes resulted in the death of one civilian in an airport complex under construction. A gaping crater was left in the wake of the U.S. airstrike outside Karbala's defunct airport. Iraqi forces inspected an area covered in shards of glass and debris.

Kataib Hezbollah, the militia group the U.S. blames for Wednesday's attack at Camp Taji base that killed two U.S. and one British service members and wounded 14 other personnel, has not commented on the strikes, but another Iranian-backed group has vowed revenge.

The back-and-forth strikes potentially signal another cycle of violence between U.S. and Iranian forces that could play out in Iraq, and they threaten to hamper U.S. negotiations with the Iraqi government to keep American troops in the country.

Harakat Hezbollah al-Nujaba, an Iran-backed militia group designated as a terrorist organization by the U.S., vowed to retaliate with "an eye for an eye" in a statement Friday.

Iraq's military and senior officials condemned the airstrikes, saying they were in breach of the country's sovereignty.

"The pretext that this attack came as a response to the aggressive action targeting Taji Camp is a false one, and leads to escalation without providing any solutions to control the situation," the statement said.

Iraq's presidency said the continual violations of sovereignty constituted a "serious weakening" of the state's capabilities during a time when the country is facing unprecedented challenges politically, economically and by the coronavirus pandemic.

In Baghdad's Tahrir Square, the hub of a six-month protest movement, crowds gathered to reject the U.S. strike.

"We condemn the attacks on the Hashed al-Shaabi [Popular Mobilization Forces] facilities in Iraq," said Ali Muften, a protester. "America and Iran threaten each other, but ultimately Iraqis are the victims."

Asked about the Iraqi deaths, McKenzie said the U.S. talked with the Iraqi military and they knew the U.S. attack was imminent.

"If Iraqis were there and Iraqi military forces were there, I would say it's probably not a good idea to position yourself with Kataib Hezbollah in the wake of a strike that killed Americans and coalition members," he said.

Because of the ongoing threat, McKenzie said Defense Secretary Mark Esper has agreed to keep two Navy aircraft carriers -- the USS Dwight D. Eisenhower and the USS Harry S. Truman -- in the Gulf region "for a period of time." He said this is the first time since 2012 that the U.S. has had two carriers in the region at the same time.

He also said Patriot air-defense missile systems are being moved into Iraq to provide defenses against ballistic missile attacks.

The latest strikes mark a rapid escalation in tensions with Tehran and its proxy groups in Iraq, just two months after Iran carried out a ballistic missile attack against American troops at a base in Iraq. They took place just hours after top U.S. defense leaders threatened retaliation for Wednesday's rocket attack, making clear that they knew who did it and that the attackers would be held accountable.

"The United States will not tolerate attacks against our people, our interests, or our allies," Esper said. "As we have demonstrated in recent months, we will take any action necessary to protect our forces in Iraq and the region."

According to the U.S. military, the locations of the strikes were largely around the Baghdad region. The strikes hit weapons storage facilities in Karbala, Al-Musayib, and Arab Nawar Ahmad, and a missile storage and propellant production facility in Jurf al-Sakher,

Before the strikes, top U.S. officials including President Donald Trump and Esper had suggested retaliation was coming. And McKenzie told senators in a public hearing that the deaths of U.S. and coalition troops created a "red line" for the U.S.

Information for this article was contributed by Lolita C. Baldor, Robert Burns, Qassim Abdul-Zahra, Samya Kullab and Qassim Abdul-Zahra of The Associated Press; and by Louisa Loveluck, Dan Lamothe and Mustafa Salim of The Washington Post.