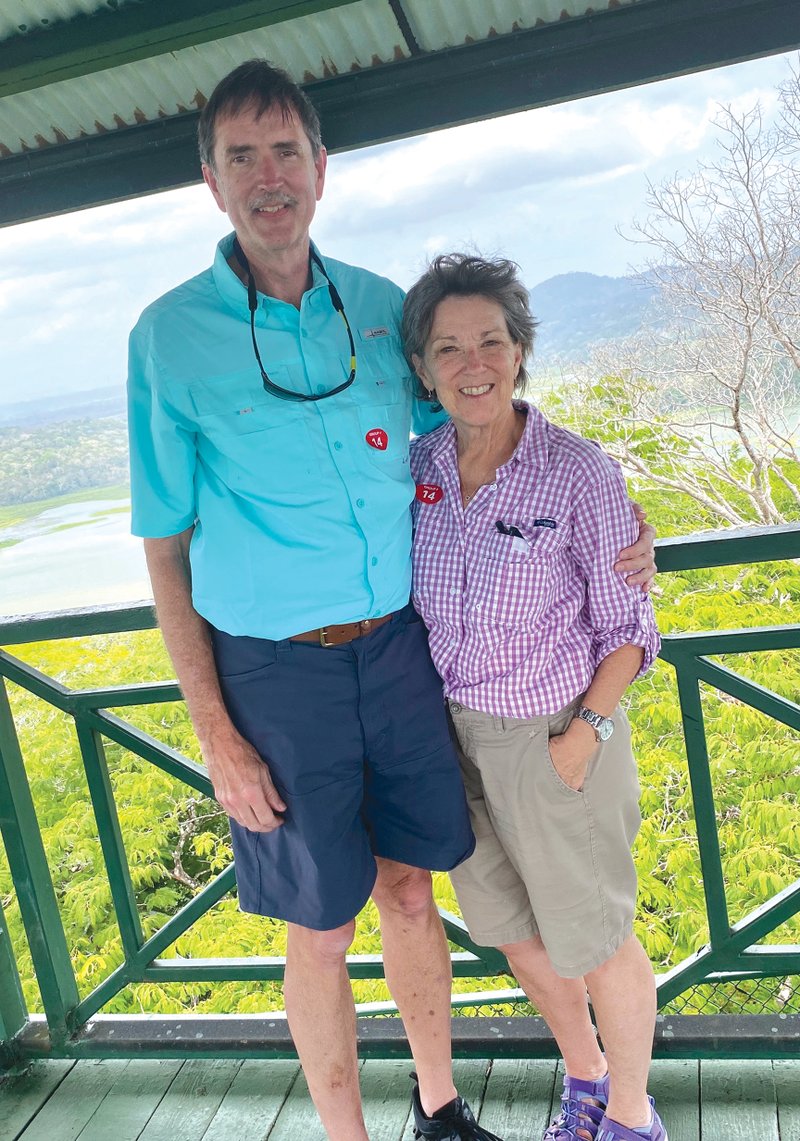 Charlotte and Mark Strickland of Conway pose in the forest in Panama. The couple, whose anniversary is in July, took a celebratory cruise March 1 through Wednesday. Two crew members on their ship had transferred from a ship that later had a case of the coronavirus. The 3,000 passengers, including the Stricklands, were detained at sea before their last stop and unable to disembark until the crew members tested negatively for the virus. Charlotte said “my heart goes out” to the cruise lines and its employees, who are trying to make a living, as well as take care of passengers.

CONWAY — When Charlotte and Mark Strickland of Conway planned an anniversary cruise for March 1-11, the coronavirus was just coming into the public’s conversation.

“We really weren’t worried about it,” Charlotte Strickland said.

Reality hit when it was determined that two crew members on the 3,000-passenger Princess Caribbean had transferred from a ship with a confirmed coronavirus case.

The Stricklands were temporarily detained at sea while the crew members were quarantined and tested.

Those crew members ultimately tested negative for the coronavirus, which has been declared a pandemic by the World Health Organization.

Charlotte Strickland, director of professional development and training at the University of Central Arkansas in Conway, returned home Wednesday night and was back at work Thursday. She was cleared by UCA medical director Dr. Randy Pastor. Mark works for a wholesale restaurant company in Conway.

What Strickland said she found fascinating about her experience was the different reactions of passengers to the stressful situation.

“You see the best in people and the worst in people,” she said. “People came together and were being encouraging,” but she also saw a woman screaming at a staff member on the ship. “I told him, ‘You handled that so well, and you’re a professional.’ It was fascinating to see how different people navigate it. When you’re in something like that, you just roll with it.”

Strickland said it had been a dream of hers to see the Panama Canal. Although she and Mark won’t celebrate their 33rd wedding anniversary until July, they wanted to go on a cruise during a less expensive time. She couldn’t go during spring break because she had planned to go on a community-service trip with students to Memphis through Bear Boots on the Ground. The trip has since been canceled.

Before the cruise, the Stricklands and other passengers received an email that people who had been aboard this same ship had contracted the norovirus, and [the ship] had come back a day early from its cruise to “go through a strict detox,” she said. The vessel had to be cleared by the Centers for Disease Control and Prevention. The cleaning delayed the Stricklands’ boarding by three hours.

“We’re kind of risk-takers, and we thought, ‘Well, the ship is going to be cleaner now than ever,’” she said.

Also, the cruise line sent several emails informing passengers that people who had been to China, Iran or other countries more severely affected by the coronavirus were not going to be allowed to board the ship, she said.

“Mark and I felt pretty confident between that and the detoxing of the ship,” she said.

The staff went above and beyond on safety precautions, she said. The passengers were not allowed to serve themselves from the buffets; instead, the crew, wearing rubber gloves, filled the passengers’ plates and drinks. “You couldn’t touch anything. You would point through [the buffet] glass. You couldn’t touch one utensil,” she said.

Before going into any area that served food, even an ice cream cone, Strickland said, passengers were required to wash their hands for 20 seconds, “and they timed it,” and then use hand sanitizer. “I think I had the cleanest hands in America,” she said.

The trip began as scheduled after the ship was cleaned. Five stops were scheduled: Jamaica, Colombia, the Panama Canal, Costa Rica and the Cayman Islands, the last stop on March 9.

However, on Sunday, March 8, as they were getting ready for dinner, Strickland said, the captain announced over the loudspeaker that two crew members who had been on a ship that had a coronavirus case had to be tested. The crew members had been off that ship for 16 days and 10 days, respectively, she said. A shuttle ship brought the test kits to the ship.

“They were not about to let 3,000 of us off at Grand Cayman. There was a gasp; people were not happy,” she said.

On Monday, March 9, they were told the ship was going back to Florida. Strickland said she read books, and she and Mark continued to enjoy what the cruise ship had to offer.

“We were just looking at each other going, ‘You know, it is what it is. We’re just going to enjoy the day at sea.’ We didn’t try to create scenarios.”

The couple had decided not to pay for wireless internet on the cruise, but when the passengers were detained, the captain announced that everyone would get free Wi-Fi and free phone calls. Strickland said she contacted her bosses, Ronnie Williams, vice president for student services and institutional diversity at UCA, and Angela Webster, associate vice president for institutional diversity and inclusion, but decided not to post on social media. Later, Strickland found out that rumors about her were rampant, she said.

At 11:30 Tuesday morning, March 10, she and Mark were by the pool when the captain made his announcement that “we are pleased to announce the test results of the two crew members are negative, and the CDC has released the ship to return to Port Everglades and [passengers to] disembark.”

“The ship erupted; people were cheering and running to the bar, and everyone started talking,” Strickland said, laughing.

The ship docked in Fort Lauderdale, and the Stricklands disembarked Wednesday, March 11, as planned. The Princess line gave the passengers partial credit and a 25 percent discount for another trip.

Strickland said she’d “go back tomorrow” if she could.

“I’m not an alarmist,” she said. I don’t live that way. I tend to be a risk-taker anyway. I don’t want to minimize how you shouldn’t go out. There’s got to be a balance. … You can’t hibernate, but I understand now it’s a pandemic.

“The thing I walked away with was, let’s be calm and civil. Calmness is important, and not to take our stress and anxiety out on those around us. They’re doing the best they can do,” she said.

It was worth the trip to see the Panama Canal, she said, which made a lasting impression on her.

“It was unbelievable. It was just remarkable … just the history and the country; it was wonderful. It was a 10. The United States built that and turned it over to the country of Panama, and that just made me so proud to be an American. It’s used by ships all over the world. … It reminded me of how we can do great things when we put our minds to it.”

Strickland said the trip gave the couple a much-needed break from their jobs, and they enjoyed spending time together.

“We needed to walk away and refresh — refresh our marriage, as well as refresh from work and stress.”

They did that, she said, despite the complications of the trip.